Movie Review: A physical and emotional conflict resonate in A War 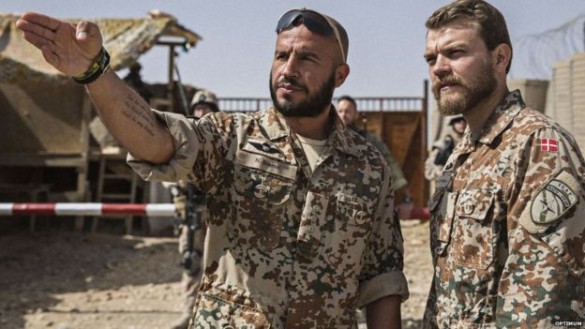 Synopsis: Company commander Claus M. Pedersen and his men are stationed in an Afghan province. Meanwhile back in Denmark Claus’ wife Maria (Tuva Novotny) is trying to hold everyday life together with a husband at war and three children missing their father. During a routine mission, the soldiers are caught in heavy crossfire and in order to save his men, Claus makes a decision that has grave consequences for him – and his family back home.

Tobias Lindholm’s A War was nominated for a Best Foreign Language Oscar earlier this year and it earned every bit of that nomination. A War is an important film for American audiences, as it depicts a unique and poignant Danish perspective on the Iraq and Afghanistan War. We’ve seen countless films on that particular conflict since the early 2000’s but rarely do we see it from another country’s perspective, let alone one from a country that isn’t talked about much in the U.S.

A War opens with Commander Claus (Pilou Asbæk) and his men on patrols in an Afghan province. While it is mostly quiet, the men are constantly having to deal with land mines and the idea that the Taliban are always lurking around. Meanwhile back in Denmark, Claus’ wife Maria (Tuva Novotny) is taking care of their three children who are missing their father. It’s not exactly easy going but they are making it work the best they can. During a routine mission in a nearby village, Claus and his soldiers are caught in heavy crossfire, one man is critically wounded and in an attempt to save his men, Claus makes a decision that is rather morally and ethically gray. It also comes with a big cost, as he is eventually sent back home and put under investigation.

There is a visceral intimacy that smothers this film. It’s pretty clear that Lindholm is interested in the emotion of his characters, as well as the film’s themes, which is supported beautifully by Sune Wagner’s score. The pathos of A War is also felt in the pacing of the movie, which is slow and methodical, allowing for Lindholm to focus on the visceral reaction that his characters give on screen. And those reactions are important to Lindholm. A lot of time is spent on characters reflecting and processing their emotions in the middle of this rather sticky situation. “Is it true that you’ve killed children?” asks Claus’ daughter as Lindholm lingers on Claus and his stoic face. There are many moments similar to that where something will happen and all we see visually are characters processing what is in front them. That kind of approach gives space for the moral conflict presented here to carry more weight and authenticity.

Speaking of, at the heart of A War, it explores the ethical dilemma of accepting consequences of your actions in war and how that effects your family back home. As the commander of this Danish military unit, it is Claus’ job to get his men home safely and the actions that Claus takes when he and his men were under heavy gun fire reflect that idea. Claus wanted to get home to his family and he wanted the same for his fellow soldiers. The irony in all of that; local Afghan families suffered. Narratively, Lindholm does a captivating job of weaving through all the options of what the right ethics may or may not have been.

What is really impressive about A War though, is how well balanced the film is overall. We, as the audience, spend equal measures with Claus and his soldiers in Afghanistan as well with Maria and the children back home. This allows us to engage with both sides of the conflict and it supplants our sympathy for Claus and his emotional turmoil. We come to know why Maria needs him at home and why their kids just want their daddy. We also feel for Claus’ fellow soldiers and the struggle it was for them in during the fallout of what happens in the second half of the movie. When you break down A War, it really shouldn’t have worked. It’s a war film, a family-relationship drama and a court room drama all in one two-hour experience. However, the balance is so spot on, it all comes together seamlessly making the intimacy of this film even more visceral.

The performances from Pilou Asbæk and Tuva Novotny are wonderful. Lindholm relies heavily on ambiguity and some great stoic acting from Asbæk but the final act offers some superb catharsis from both Asbæk and Novotny that impeccably depict the emotional tug of war we see in this film. There’s a fine line, but a rather massive line, between being at home with your family and accepting consequential fate. These two actors make that struggle come alive and as a result, A War richly depicts, not only the physical war that Denmark was a part, but also this internal emotional war these characters faced. And the final product is beautiful and moving.