Movie Review: A Million Ways to Die in the West 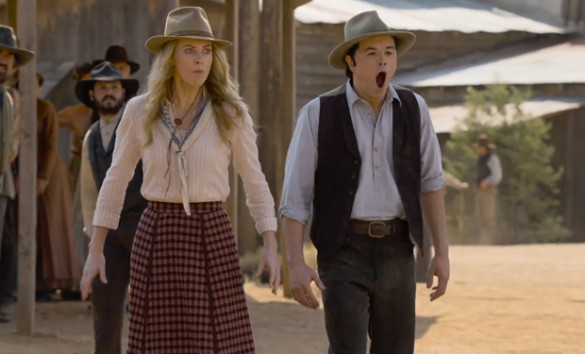 Synopsis: As a cowardly farmer begins to fall for the mysterious new woman in town, he must put his new-found courage to the test when her husband, a notorious gun-slinger, announces his arrival.

DIRECTION
Seth MacFarlane is at it again in A Million Ways to Die in the West and he sure does bring his unique flair to the old west. If you’re expecting a live-action western-style Family Guy (as I mostly was), you may be a little bit disappointed. The story is a bit more straight forward than that but MacFarlane throws in some fun cameos and his satire on the old west is pretty great. However, the editing was pretty poor and some of the gags were poorly executed. For the most part though, MacFarlane delivers his quirky, humorous style surrounded in metaphors and silliness that you’d expect from him.

SCRIPT
It’s 1882 in the Old West and Albert (MacFarlane) is a sheep farmer who’s a little cowardly, awkward and heartbroken with the recent breakup with his girlfriend Louise (Amanda Seyfried). To deal with his recent heartache, he goes out drinking with his old buddy Edward (Giovanni Ribisi) and Edward’s girlfriend Ruth (Sarah Silverman). It’s here we find out that there are a million ways to die in the west, it’s a terrible a place and that love is your only escape. After a scurry in a bar fight, Albert meets Anna (Charlize Theron) who set off on an adventure that leads to chaos, horse chases, an Indian bon fire and more Western metaphorical situations. But in the end, the film mostly uses all of that as a vehicle to move it’s themes of finding courage and confidence and following your heart. But of course, in the Seth MacFarlane-y way that he likes to do. While the script mostly works, the Edward and Ruth storyline is unnecessary and overly crude at times as well as some other gags involving Foy (Neil Patrick Harris). All in all, if you like MacFarlane’s style, you’ll mostly enjoy this film.

PERFORMANCES
Seth MacFarlane is not terrible but relies heavily on slapstick comedy, fun cameos and his surrounding cast quite a bit. He may not have the chops to carry the lead by himself but he’s fully aware of that and takes advantage of his strengths well. Charlize Theron, Liam Neeson and Amanda Seyfriend offer some solid supporting roles, although not much effort is really going into them. They mostly stick to the metaphors and jokes carrying the characters. Giovanni Ribisi however seemed to offer a little bit more and had some interesting comedic timing, which was really effective. Neil Patrick Harris was pretty annoying and unfortunately not in a good way.

SCORE
Joel McNeely does a descent job of offering western-style tones that are mostly subtle but it offers the atmospheric tone that you’d want from a film like this. But of course, in a Seth McFarlane film, there’s always singing gags that take up the spotlight and this is no different. Alan Jackson also has a song that’s pretty good as well.

FINAL THOUGHTS
Once again, A Million Ways to Die in the West is pretty much what you see is what you get, especially if you’ve seen the trailers. There weren’t many big narrative surprises but there were several cameos that are totally worth seeing. If you like this kind of comedy, you’ll get what you want.