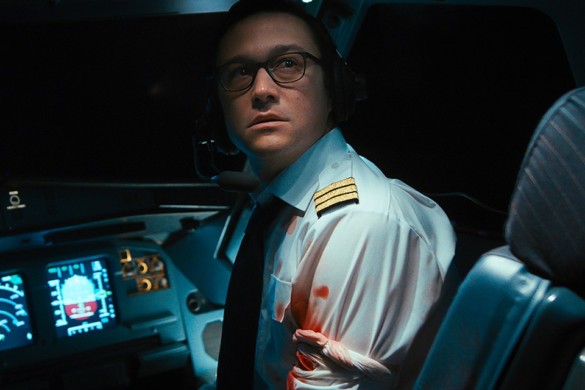 Synopsis: A pilot’s aircraft is hijacked by terrorists.

Joseph Gordon-Levitt is back on the big screen. Well, he would be if theaters were open. He’s had small cameos in Rian Johnson’s last two films, but it’s been four years since we last saw him in a major role in Snowden. And his presence in Patrick Vollrath’s 7500 is a welcomed one. Not only is it great to see him again, but once again he reminds us why he’s such a compelling actor. 7500 leans heavily on Gordon-Levitt, and spoiler alert, he’s really great.

7500 is about airline pilot, Tobias (Levitt), who is flying a passenger airplane from Berlin to Paris when his plane is hijacked by terrorists. Tobias manages to fight them off in the cockpit, but he’s injured along the way and is forced to watch as the passengers on board become chess pieces as they are killed off in negotiations.

It’s in that where 7500 is fascinating. Tobias is forced into an ethical dilemma by maintaining control of the aircraft and keeping the cockpit door locked. Does he break protocol and open the door at the cost of handing over the keys to the terrorist, but saving hostages in the process? Or does he keep himself locked inside, in control of the aircraft, but lose hostages who are being held as ransom to the cockpit? This dichotomy is very compelling thanks to Gordon-Levitt’s performance. And if that wasn’t enough, emotional stakes are also amplified as one of the flight attendants his Tobias’ girlfriend and mother to his child. So, there’s a lot for him to process and the film does a great job of giving Gordon-Levitt room to process everything he’s experiencing. Particularly, the calm rigorousness he demonstrates.

7500 interestingly ups the psychological ante as well with how it handles Kalkan (Passar Hariky), the youngest of the terrorists and the most conflicted about what they’re doing. Without giving away spoilers, let’s just say that he’s a complicated figure and the film does a wonderful job of tethering that with Tobias’ choices and his determination to help Kalkan. Hariky is quite great here as well.

There is one big problem with 7500 though. The motivations of the terrorists are frustratingly trite. They are Muslim for no reason other than to reinforce stereotypes that Hollywood perpetuated for years. We know nothing about them, other than what we learn about Kalkan, who is seemingly very different than his brothers. In the end, while I appreciate the humanizing of Kalkan, the film recklessly tightens the notion that Muslim’s are terrorists. Politically speaking, that’s myopic, but even if we just look at that narratively, it’s mundane and derivative.

That aside though, 7500 is very well made. There’s a pragmatism in Vollrath’s direction that grounds the experience and makes it more visceral. The opening 20 minutes is an authentic step-by-step look at the process of pilots gearing for take off. The camera never leaves the cockpit. A gimmick that could get tired, but it never does. Vollrath does a great job of creating claustrophobia and even horror as the drama escalates. But he’s also not afraid to slow things down and be methodical. The film pauses often to focus on characterization and the ethical dilemma at play.

All in all, 7500 is a riveting experience thanks to Vollrath’s direction and the performances here. The film’s themes are provocative and compelling, but not enough to make up for its misguided notions on Muslim’s. Still, a film worth seeking out for Gordon-Levitt fans.