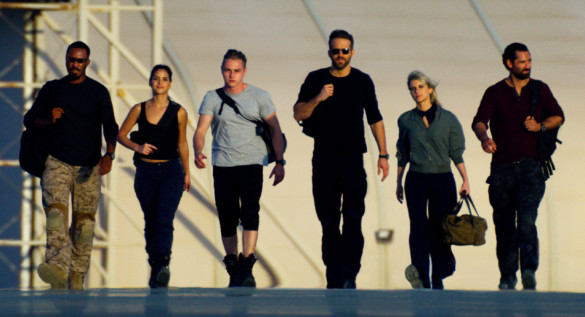 Synopsis: Meet a new kind of action hero. Six untraceable agents, totally off the grid. They’ve buried their pasts so they can change the future.

From the director of Bad Boys comes Sabotaging Squad, or as its leading actor deemed it a Bay production where Bay is at his Bay-est. If you’re irked, you should, as that means filmmaking has been interpreted as trailer-making and 6 Underground is not the silly actioner as advertised but absolutely a mess that announces itself as so in the loudest and most vulgar manner possible.

Proof? Look no farther than the film’s first set-piece — a car chase throughout Florence, Italy — that challenges sense, comprehension and tolerance. All this action is the result of a eff-up assassination mission, per the voiceover, and Bay brings the point home by filming it as if he was effed-up: flashing lights, shaky closeups, zipping bullets, flipping cars, slow-motion maneuvers, “Four” (Ben Hardy) doing parkour, shouting from “Five” (Adria Arjona), “Three” (Manuel Garcia-Rulfo) learning Italian, less-than-subtle oglings of gun-toting “Two” (Mélanie Laurent), lame quips from “One” (Ryan Reynolds) — two of them xenophobic, music zips between orchestral and pop rock, and apparently a thousand edits to capture everything (praise d.p. Bojan Bazelli for staying on until the end). Knowing Netflix’s flexibility with its filmmakers, this is Bay unshackled, and that means granting liberty to a rabid elephant. While the ensuing mayhem electrifies — where else will you see a lime-green Alfa Romeo dodging Suburbans, (then inexplicably) Audis, Subarus and Maseratis? Fracas in a penthouse with a rooftop pool?! A yacht turned into magnet?!!? — the main feeling is unpleasantness. When random is reason, even the fun that sometimes agrees to be the dumb’s best company has to make a run for it.

There is supposed to be dumb fun here: Writers Rhett Rheese and Paul Wernick are basically pumping steroids into 2001’s Swordfish, ripping off a bigger check for destruction to the order of folks with skills, wealth or both who use anonymity to right wrongs. In 6 Underground’s case, the group-o’-Ghosts’ objective is to unseat the dictator of Dubai-like Turgistan (Lior Raz) so his more democratic brother (Payman Maadi) can come to power. It’s a competent-enough setup that then degrades itself by becoming — just because — difficult to follow due to the editors on speed, a willy-nilly need to rewind when it’s going forward just fine or pivot to a hollow emotional beat. “Three” is madly in love with “Two,” but they are rarely seen in sync — not even in that sex scene in tennis clothes. “One” is basically Bruce Wayne, though most of the time the thing that’s weighing him down is obnoxiousness rather than responsibility. New recruit-slash-replacement “Seven” (Corey Hawkins) is the most human member of the group, but his loss-and-redemption arc is about as significant as single-use tissue. It’s already ruinous on the writing front, and yet Bay does nothing to save it; his action instead is to use his craftsmanship to amplify the flaws. Can’t see it? Who cares. Can’t feel it? Middle finger to you. No questions? Here’s more pyrotechnics to fill up the screen and semi-naked girls to push things along. Again, just because.

And it’s hard to say thanks — let’s assume there is a need to — since these bits are presented with nothing else besides crudeness. Shaky if slow. Dizzying if large-scale. Perversely close if anatomical.

For sure, some of the folks involved know what film they’re in — definitely Reynolds and Hardy with their “ah-whatever” spirit; absolutely Laurent with the slight annoyance upon realizing her badassery won’t be as crucial as her body — but it’s not tough to imagine that they’ll still be surprised as final cut almost totally caters to the uglies of their director. 6 Underground allows Bay to operate at his highest level and enables him to further dissolve his brand from lardy entertainment into expensive insults to filmgoers — this being the grandest one to date. Where art thou, the Bay who knows he’s on the set of a feature film? The one who has a reduced budget but turns in OK fares, or the one who can control his explosions without losing the plot? We need him above ground, stat.