Movie Review: Is ‘12 Strong’ the boost of American empowerment we need right now? 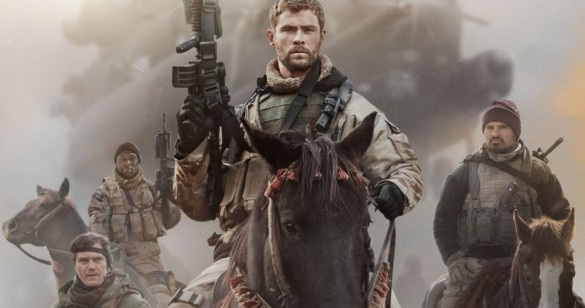 Synopsis: In the wake of Sept. 11, Capt. Mitch Nelson leads a U.S. Special Forces team into Afghanistan for an extremely dangerous mission. Once there, the soldiers develop an uneasy partnership with the Northern Alliance to take down the Taliban and its al-Qaeda allies. Outgunned and outnumbered, Nelson and his forces face overwhelming odds in a fight against a ruthless enemy that takes no prisoners.

12 Strong is something that feels extremely meticulous with its aspirations. For a film being so heavily indulgent in the idealization of self-patriotism, a substantial number of pivotal components abide from such flavorless adequacy. First-time director Nicolai Fuglsig—who is incredibly admirable for an evident yearning of attempting to compose this cohesive piece of an American reflection so prematurely on in his directorial career—reprehensibly feels marginalized from the distraction of the event and those being portrayed.

After an expedited news and media compilation extending across the U.S’ war on terror circa early 2000s, our first character introduction is commended to Capt. Mitch Nelson. He’s played quite sternly and austere by Chris Hemsworth who diminishes his trademark Australian roots in to a rugged encapsulation of this ‘macho’ American facade. Even with the indirect emotional arc being established mere minutes in to the film amidst Nelson and his family in relation to that catastrophic day – once it’s tenuous presence has been renovated into the narrative, that ploy remains fairly distant until the resolution becomes afloat. Despite Fuglsig’s inexperience, make no mistake that he wastes zero time with getting the film on track. In a sense it’s invigorating to see something with such a willingness to burn up its screen-time wisely. But contradictory to that, perhaps it wasn’t the most plausible move for the emotional augmentation of its characters. In such case that once our protagonists reach the battlefield, the threat level is so eminently low because of the minimal backstory and growth we’ve been handed.

Every last detail even mentioned in the same breath of such subject matter is indeed going to be delicate. Adapting a film recollecting on the aftermath of one of the nation’s most harrowingly sensitive events deserves to be accompanied with a heed of reverence. Fortunately the entirety of those circumstances are brought upon with a correct amount of earnest proportions. I suppose one could say it maintains a smidge of a root of blockbuster grit, yet even then nothing of such nature is glorified in any way. The significance remains increasingly consistent but alternatively the knack on the other side of the camera is too inferior to further the momentous weight. For the majority of the time in the barren war landscape, it contains an entertainment level mild enough to leave most audiences riveted. In which the pacing begins to assay off to try and keep its head above the water once we’ve reached the second act of the film, which is undoubtedly the most shoddily and hastily produced out of the three.

The eventual war sequences aren’t legitimately choreographed by some action maestro nor are they part of extravagant, mindless moments of enjoyment thus actually being a makeshift of the two. They’re sufficient enough as stepping stones towards the true climax which is oddly the saving grace for the remaining few combat segments that aren’t as stouthearted as the massive formulaic finale. I’d say that’s fairly applicable for the director of photography likewise. In terms of a war film along with its action characters and set pieces, it’s fairly sturdy in its own right. But then again, does a movie like this need the most avant-garde cinematography? Perhaps this might possibly be a personal observation, but it’s still worth noting that the color correction and final palette for this film is bluntly, abhorrent. This isn’t an attempt to make this out as an over-exaggeration, but every incessant frame is so blatantly yielded with this un-enthused, lifeless green/black tint. It initiates this foul look and feeling so chaotically fabricated, that the shade of muck is persistent on seeping through a broad stack of shots. Beside this however, its biggest ramification can be narrowed down to its boisterous infatuation of individual feats rather than an examination of the universal success of the order being carried out by these authentic heroes. In association with that, it feels as though not enough time and attentiveness is being brought upon the other facets that need it. I’m sure the assimilation between all of these elements is the vision the producers were imagining, but it doesn’t necessarily triumph.

The one aspect that remains virtually flawless throughout the increasing runtime is this companionship amongst our characters, or as these distinguished “horse soldiers”. Their chemistry and the evident palpability of topics such as valor and brotherhood are exhibited rather exceptionally. They’re rarely ever over-saturated yet serve to stabilize the atmospheric sensibility, which is something you can’t really ask for much more of. I do personally wish that Trevante Rhodes could’ve played a more notable role. His aptitude as an actor reaches far beyond the depths of 2016’s Moonlight which left 12 Strong feeling like a bit of nonevent regarding his screen-time. Michael Shannon and Michael Peña also continue to be as crafty as ever. Shannon is a natural virtuoso and Peña has always been able to provide the most premier comedic relief in a project when needed.

12 Strong carries its fair amount of flaws, as that’s quite apparent from what’s been stated above, but the good certainly outweighs the bad. War brings out a character in all of us, whether that be for better or worse. And this feature ethically shows the most foremost here. It’s a huge morale lift, providing a somewhat humane reassurance for the country’s society. Whether or not it’s venturing for those intentions, some might find gratification in a film of this caliber and genre in such a waterlogged political climate we currently reside in.