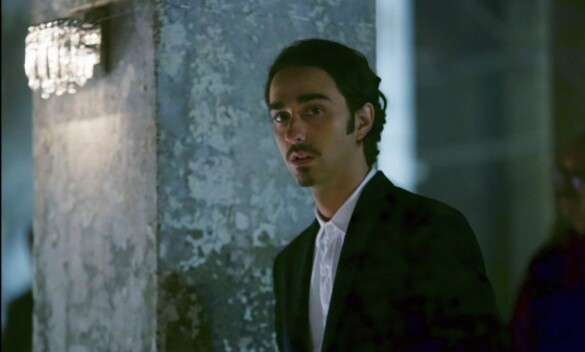 Perhaps one of the most surprising elements in a year packed with beautiful and brilliant movies was a feature starring Nicholas Cage and a pig. From its logline – a hermetic farmer’s prized truffle pig is kidnapped, leading him to seek revenge and rescue his swine companion – to the posters showing a suitably gruff, heavily bearded Cage staring darkly into the camera, suggested it would be the kind of ballsy, nonsensical movie Cage has become known for in his late stage career.

Indeed sandwiched as it was between two of Cage’s more aggressively bonkers efforts – Willy’s Wonderland, in which Cage battles murderous animatronics in a restaurant that would horrify Chuck-E-Cheese, and Prisoners of the Ghostland in which Cage’s testicles are fitted with charges that will blow them off in five days if he doesn’t apprehend a sex slave and return her to her master – you would have been forgiven for writing Pig off entirely as another check-cashing exercise for the star.

However, Pig proves to be a work of quiet, subtle genius. Methodically paced and utilizing a far more understated style of acting than expected, Pig shows that Cage is still able to carry more serious works of substance than we’ve seen from him in years. It has also surprisingly garnered awards nominations, even walking away with Best Feature from the Gotham Awards.

And yet there is another story in Pig. The rise of a talented young actor for whom 2021 saw him appear in two top-tier movies, the other being M. Night Shyamalan’s Old, in which he convincingly played a six year old in the body of a teenager. Alex Wolff, known for popular Nickelodeon series The Naked Brothers Band, in which he starred alongside his brother Nat, plays Amir, a young entrepreneur who guides Cage’s wild farmer, Robin, through the urban jungle in search of his pig. Wolff plays Amir as slightly cynical and perhaps jaded, yet wide-eyed with admiration for Robin. It’s a similar dynamic to how Wolff himself views Cage, having worked with him for the first time, as well as the generational divide between both Robin and Amir, and the same again for Cage and Wolff.

“It doesn’t come up very much, to be totally honest,” Wolff says when InSession Film meets with him. “When you’re an actor, people like to craft your story and build your image. I think we’re just day-by-day. For Nic it felt like just yesterday he was doing Raising Arizona, [and] for me all these movies just started happening. What you connect on, for me, is more your taste in film. And we  have the same taste in film; both big Bergman obsessives and Bellini fans, big fans of Carnival of Souls and Ugetsu, these styles of filmmaking. That forced us to bond over our similar tastes. It informs our choices of career.”

It’s an interesting idea; two actors who share a love of a certain style of filmmaking and whose love of that style informs their career path. It suggests a confluence of two very similar trajectories. Is it something Wolff and Cage discussed often? “We don’t talk about careers that much,” Wolff demurs, “what a boring waste of two really passionate, interesting people to be talking about our fucking careers! It’d just be really boring to me. I’m just happy to be with a person I feel close with, to talk art with.”

Throughout our conversation. Wolff is animated and lively, he is clearly a very passionate person with a love for movies which shines through. You imagine him bringing that kind of passion into his characters, investing them with a deep sense of self, a confidence and purpose that is not unlike Wolff’s own. Indeed Amir presents as a flashy confident young man, full of swagger. How did Wolff prepare for such a role, and what did he imbue Amir with that wasn’t necessarily on the page?

“It’s different for each movie,” Wolff says, “sometimes you show up, you have a day to prepare, then you get your clothes, and that kind of is the thing that informs your character. If you close your eyes and picture Italy; even if you’re not there these images come to mind, these smells, these tastes. I think it was like that for Amir, it was so vivid. You didn’t even have to intellectually think about it that much; of course he’s wearing rings, of course he’s wearing a gold watch, of course his hair is slicked. And then the moustache. Michael was like “would you do facial hair?” I’m like, perfect! I think [the filmmakers] wanted to steer it into a little more loud and eurotrashy, but I thought he wanted to be more crisp and serious. You know that thing they say in fashion, take one thing off before you walk out the door? Well he never does. He puts one more thing on. It’s so obvious how pathetic and vulnerable he is, but I really wanted it to be like on the surface you feel this kind of togetherness [because] it wouldn’t be as much fun to watch him crack open.”

Despite the generational differences, it’s clear Cage and Wolff got on well. What did Wolff learn about the craft of acting during his time with Cage? “I think I learned as much from him personally as I did as an actor.” Wolff responds, “I started knowing one world of acting, and he introduced me to a whole universe of acting. I remember doing one scene where he’s talking about the wave, and how the wave’s gonna come and wash away everything, putting everything in perspective. And right before [the scene], he said something like “watch this” and did a take, and this motherfucker built a wave for me to see. I’m not exaggerating, as he was talking I was seeing the wave, and right after I said “you just made me see…”, and he said “I know.”  I was like, okay so you’re some kind of wizard. You’re not a person, you’re an artist-wizard. So I took so much from that. Like, I gotta really go in, because he is. He’s making me see shit that’s not there. That’s real acting. Words can’t describe it. It was profound.”

What about the reverse? Acting is, of course, reacting. How important was Wolff’s performance to lifting up Cage’s performance. “I have to be loose,” Wolff says, “I have to not put too much pressure on something. Or else you just tense up, you know? You’re human.”

Speaking of humanity, how does something like Pig compare to Wolff’s other work, such as Hereditary, it terms of the emotions it evokes and what it requires from him as an actor? At this question. Wolff takes a big pause to consider. “I think,” he finally says, “if you’re going to think about things in terms of humanity, it all starts with small things. With people and connections. It’s a fool’s errand to try and make a movie that addresses anything holistically, as a people. Movies really hit everywhere. Hereditary really connected with people’s innermost terrors; that was a very, very specific, very personal thing. I think that Pig is even smaller, even more personal. I think that collectively it’s up to people to decide. People like you who, maybe, are better at surmising what things mean, to brand this movie for what it says about humanity. Our job was to say what we wanted to say about these people in that moment. Even then, it’s not our job to say anything, it’s our job to exist; and it’s the director’s job to put these two existences together.”

“I think that anytime a movie doesn’t work it’s usually about trying to appeal to something wider, to do something that’s not honest, and not personal, and not specific. That’s been my experience. What I take away from Pig is that, holy shit, you can get as specific as a story about truffles, and these two really specific guys and still connect to a wide audience. You’re only going to get to the core of humanity the deeper you dive into yourself’.”

Wolff has an analytic mind that you feel would also be suitable for working behind the camera. It’s no surprise that in 2019 he made his directorial debut with The Cat and the Moon, a coming-of-age story about a suicidal young man who moves to New York. It’s tenderly made and allows its characters room to breathe and their stories to unfold. One wonders how Wolff’s experience behind the camera informed his experience in front of it for Pig. “I saw that being a director, from the top of the food chain, you can really set an example of love and being gentle and being warm,” he says, and once again his passion comes forth. It’s clear how much this means to him.

“It’s bullshit when the head of a hierarchy is trying to be dogmatic and yell at everybody. I always thought “oh, I don’t understand that pressure”, but when I got to that point I realized you don’t have to do that, and actually it really behooves your set and your film to make your actors feel really held. I go the extreme, I wanna be so in love with these actors that by the time the movie’s over, I wanna go lay in bed for months and not do anything else. You know when you wake up from a dream and everything about it was magical and it hurts just to not be there anymore? That’s how I want my sets to be.”

“As an actor I think it starts with you to spread that energy, especially as you become more respected as a person when you walk on set. You’re not just a complete no name, you have a bit more power to spread a positivity and warmth and a looseness. That’s what I took to Pig – let’s keep everything open, let’s keep everything free.”

With that our time is up and Alex heads off for his next appointment. As he goes, it’s hard not to think his energy, optimism, and passion for the world of filmmaking will see him go far; that we may be seeing an actor at the beginning of what could become a bright, exciting future. That his love and knowledge of film might inform some future classics. That, like his character Amir, beneath the swagger and confidence, there is much more to see.

Few filmmakers have exploded onto the scene the way that Neill Blomkamp did with his 2009 feature debut,... Read More »