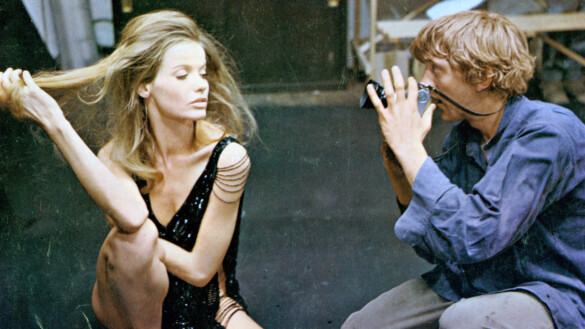 Pedro Almodóvar announced he will be shooting his first full-length English language feature (The Human Voice is a short film) this year starring Cate Blanchett. It has been rumored to be with Almodóvar for a long time, becoming the next great international director to take a shot in this language. Some have been successful, others have not, so there is anticipation for this feature. Hopefully, it will be one that translates better than others as their first English-speaking film. Other great directing masters have also shuttled abroad to do their first film with mixed results.

French legend Jean Renoir was forced to move to the United States after France was invaded by Nazi Germany in 1941. He would make a string of Hollywood films throughout the 1940s, starting with this crime drama starring Walter Brennan and Walter Huston. This Southern Gothic crime drama was a bit of a hassle for Renoir shooting on location and dealing with the cantankerous producer Darryl Zanuck, who Renoir claimed fired him and rehired him on the same day. It received good reviews and did well at the box office, allowing Renoir to settle in.

Michelangelo Antonioni was a sensation with his slow-pacing, mysterious, Swinging Sixties drama about a photographer who accidentally captures a murder in progress. It’s the best use of color he ever managed and perfectly utilizes silence and imagery to get the most out of experimental techniques, which could be polarizing at times. For Antonioni, being that it was the expression that was more important than the dialogue, it was no problem for the Italian in changing languages and he was able to produce more English-speaking work in Zabriskie Point and The Passenger.

Ray Bradbury’s best-selling novel was bought by Universal, who then hired French auteur Francois Truffaut to make the film, even though he spoke almost no English. Starring Julie Christie and Oskar Werner, it is one of the most read novels of dystopia and a critique of censorship. The script was written in French and then translated, but it was a positive experience for Truffaut in trying out Hollywood productions as he sought to be like his idols who influenced him, even though the film itself wasn’t that special.

Ingmar Bergman finally got his chance to make a film for Hollywood but got to make it in his native Sweden anyway. A married woman (Bibi Andersson) falls for an American archaeologist visiting (Elliot Gould) and the two share a passionate affair troubled by his own family past that haunts him. Paul Newman, Robert Redford, and Dustin Hoffman were considered before the role went to Gould, who was honored yet concerned if it could possibly hurt his career. The film is one of Bergman’s most negatively critiqued films because many saw it as a dull version of other human affairs dramas, but it has its champions from the late film critics Gene Siskel and Richard Schickel who found The Touch as one of Bergman’s more mature works heading into the 1970s.

Bong Joon-ho’s first English-language film is this incredible world about class, global warming, and the price of freedom. Besides his battle with Harvey Weinstein over the cut of the film (the fish gutting scene which Bong kept by lying to him about it being a tribute to his dad), Bong was able to put out this dystopian world that fit his own vision. Chris Evans, Song Kang-ho, Ed Harris, Tilda Swinton, and John Hurt are part of a great ensemble that carries the train from the inside and is pushing to the front, their right to live equally with the rest in an already collapsed setting.