Featured: Why ‘What’s Up Doc?’ is a perfect feel-good film 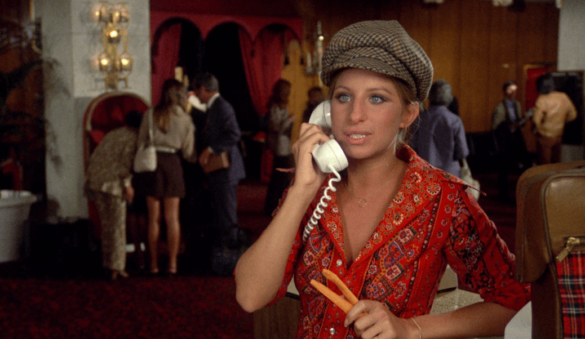 1972 was a remarkable year for American cinema, with the release of such classics as The Godfather, Cabaret, The Getaway, Deliverance and The Candidate to name a few. Francis Ford Coppola’s The Godfather was the highest-grossing film of the year, followed by Ronald Neame’s disaster film, The Poseidon Adventure. The third highest-grossing film of the year is probably a film that many of you haven’t heard of before, Peter Bogdanovich’s screwball comedy What’s Up Doc?. To this date, the film remains Bogdanovich’s most profitable film, grossing $66 million on a budget of $4 million. Prior to the release of What’s Up Doc? Bogdanovich had received critical praise for his black and white drama, The Last Picture Show which came out the year before. Side by side, these two films couldn’t be any more different but they both reflect the director’s appreciation and admiration for the films of classic Hollywood.

For those who aren’t aware, What’s Up Doc? is a romantic comedy starring the delightfully quirky Barbra Streisand and the heart-throb of the day, Ryan O’Neal.The plot (used in the loosest of terms) revolves around four identical plaid overnight bags which end up causing a mix-up at the same hotel as our main characters are staying. O’Neal is Dr. Howard Bannister, a musicologist  who has travelled to San Francisco with his tightly wound, overbearing fiancée, Eunice Burns (Madeline Kahn), to obtain a grant offered by Frederick Larrabee (Austin Pendleton).

He crosses paths with the eccentric, quick-witted and spontaneous Judy Maxwell (Streisand) who becomes intrigued by Bannister. At first, Judy seems to be interested in winding him up, but it quickly becomes apparent that she’s genuinely interested in helping him and interested him as a person. There’s also a mysterious government agent now turned whistleblower called Mr. Smith (Michael Murphy) who is being followed by another agent known as Mr. Jones (Philip Roth). As well as the wealthy socialite Mrs. Van Hoskins (Mabel Albertson) who has her bag full of priceless jewelry stolen. If this all sounds completely chaotic and totally bonkers…well that’s the point!

The film’s final act descends into utter madness when a car chase occurs in the fashion of a Warner Bros. cartoon including a hilarious gag involving two men trying to transport a glass pane across a road. It’s whacky and over-the-top in all the right ways. While not all of the joes have aged practicularlly well, (there’s an uncomfortable joke about sexual assault that left me whincing), there’s still plenty of gags that land. Bogdanovich manges to recreate the essences of a Howard Hawks screwball comedy with the fast-paced dialogue and the stinging one-liners delivered perfectly by O’Neal and Streisand.

The story behind the film’s production is rather interesting. Hot off the success of The Last Picture Show, Bogdanovich was approached by studio executive John Calley to direct A Glimpse of a Tiger and Steve McQueen also approached him for The Getaway. Neither of these films interested him. McQueen wasn’t the only talent wanting to work with him, Streisand was also very keen. Bogdanovich was even asked to direct The Godfather but reportedly turned it down because he didn’t want to work on another drama.

According to Bogdanovich, Calley asked him what he wanted to film, to which he replied with  “A screwball comedy, like Bringing Up Baby, with Barbra. A square professor and a daffy dame who breaks him down live happily ever after.” Calley was onboard with this idea, as long as Bogdanovich ensured the script was ready in time for shooting to begin in August 1971 because of Streisand’s schedule, meaning there were only a few months for Bogdanovich along with screenwriters Robert Benton, David Newman and Buck Henry to work on the script. Even while Bogdanovich was filming, jokes and gags were still being schemed up. It sounds like a recipe for disaster but luckily everything worked out. In fact, Bogdanovich described the whole experince as “It was absolute heaven from beginning to end” and has stated “What’s Up, Doc? was the most fun of any picture I’ve ever made.”

The script is a work of genius, full of many little in-jokes which poked fun at the screwball comedy genre, but Bogdanovich isn’t simply ripping off these traits and mocking the films of the past. Richard Bordy’s piece for The New Yorker sums Bogdanovich’s intentions perfectly: “He was in full-retro mode, but he was no nostalgist. He borrowed genres and tones from the past because that past seemed, to him, neither dead nor past.”

lso poked fun at the corny romantic films at the time which focused on a young couple coming from different backgrounds and falling in love at first sight. In the film’s closing lines, O’Neal repeats the line from Love Story, “Love means never having to say sorry” which Streisand’s character replies back with “That’s the dumbest thing I ever heard.” What’s Up Doc? works because of the chemistry of Streisand and O’Neal, who were dating at the time. Streisand and O’Neal even get a chance to show off their singing talents, in a duet. O’Neal delivers a great performance, but this is really Streisand’s picture and she truly dominates here.

According to Bogdanovich, he remembers how “Barbra Streisand told me before we did the picture, “I’ve never been directed. Nobody’s ever directed me in a picture.” I said, “Well, you’re about to be directed,” and I directed the hell out of her.” Her character is well-written and plays to her talent as a comedic actress. Judy Maxwell is very much a young woman of her time, intelligent and independent who uses her brains rather than her looks to get by. Even in 2020, it’s still very rare that we see characters like Judy Maxwell being depicted on the big-screen and propelling the narrative forward.

During self-isolation, I am finding myself going back and revisiting classic films. What’s Up Doc? may not be an absolute masterpiece but it’s a great distraction from what’s currently happening. It’s a lot of fun and compared to other comedies from the era, it’s actually aged pretty well. And, that’s all folks.