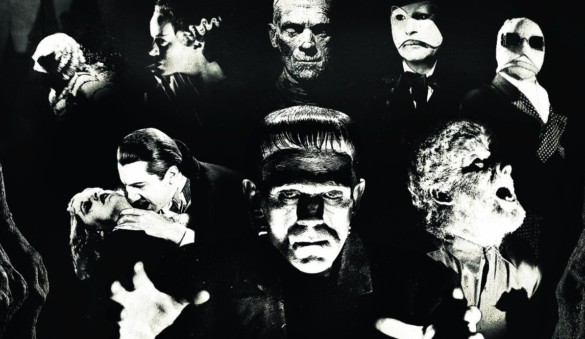 With the modern retelling of H.G. Wells’ The Invisible Man coming out, it’s a good time to recognize the early success of Universal Studios’ of creating the first sharted world in Hollywood. Before Marvel and DC Films, there was a string of horror, sci-fi, and thriller pictures from 1923’s The Hunchback Of Notre Dame to 1956’s The Creature Walks Among Us. It wasn’t planned, but the standard for the genres was inserted that other studios would have to follow up on and established the careers of Boris Karloff, Lon Chaney Sr. and Jr., Bela Lugosi, Claude Rains, Edward Van Sloan, and Colin Clive.

After The Hunchback Of Notre Dame, Universal’s second and final major silent horror film was 1925’s The Phantom Of The Opera. Both starred Lon Chaney Sr. in the main roles as Quasimodo and The Phantom with the full support of Universal head Carl Laemmle. Laemmle met Phantom author Gaston Leroux and bought the rights to his novel almost instantly and the young, charismatic Irving Thalberg pitched Hunchback to Laemmle as part horror, part love story, and part spectacle with extravagant production design. Thanks to these two films, Chaney Sr. became a top-billing star. Phantom was more noted because of the famous reveal of The Phantom’s horrid face (this is not musical by any means) and the massive construction of Soundstage 28 to purposely build the Paris Opera House. Yes, young people, they had to build these massive structures.

In the midst of the Great Depression, Universal came out with some of their peak works that remain on the top of iconic horror characters in cinema. In 1931, both Dracula and Frankenstein were released. Laemmle’s son, Carl Jr., had taken over as head of the studio, Garrett Fort wrote both scripts, and Frankenstein introduced us to director James Whale, who later be immortalized in 1998’s Gods And Monsters. With Dracula, Lugosi got the role based on his success with the play version years earlier, but the concern was for a full-length supernatural movie an audience had never seen, as well as Carl Jr’s. lavish spending (which got him and his father thrown out of Universal years later). The massive success led to several spin-offs including Dracula’s Daughter and Son of Dracula and made Bram Stoker’s creation the quintessential vampire for later films. On a side note, a Spanish version was made simultaneously on the same sets with Carlos Villarías in the titular role.

With Frankenstein, based on Mary Shelley’s novel and Peggy Webling’s play, the mad scientist story came alive thanks to Colin Clive playing the titular character who digs up dead bodies with his hunchback assistant Fritz to bring back alive a human using electrical powers. Of course, it works, leading to the famous line by Frankenstein, “It’s alive!” While it was a massive success, the scene involving Frankenstein’s monster and the little girl got the film cut or banned outright in some states, as well as another line by the mad doctor, “In the name of God? Now I know what it feels like to BE God!” Sounds silly, but felt very blasphemous to many. But what James Whale does in crafting such a beautiful, yet sinister picture is made with such care and does not feel totally grotesque. Whale would direct the sequel Bride of Frankenstein, but had no part in Son of Frankenstein nor in Ghost of Frankenstein.

Also released this decade was the original The Invisible Man, also directed by Whale and starring Claude Rains, who would later star in the sound remake of Phantom of the Opera, and Gloria Stuart, who would gain her biggest role more than 60 years later in Titanic. Before Brendan Fraser and Tom Cruise, The Mummy came out in 1932 with Boris Karloff playing the Egyptian high priest Imhotep wrapped like a mummy who calls himself Ardath Bey when free and endangering others. The discovery of King Tutankhamun’s tomb and the supposed curse of those who disturbed it inspired the idea and would be followed with four sequels in the 1940s and get a comedy injection in Abbott And Costello Meet The Mummy in 1955.

The last noted 1930s horror film is Werewolf of London, starring Henry Hull as a wealthy English botanist who is bitten by a werewolf while in Tibet that later changes him slowly when he returns back home. In 1941, a separate werewolf picture was made that added another layer to the monster universe, The Wolf Man. Lon Cheney Jr. plays a man who returns home following the death of his brother and seeks to reconnect with his father, played by Claude Rains. When the man saves a young woman from a wolf attack and is bitten, the legend consistently recited in the film turns on him. The next slate of films were sequels and crossovers, such as 1943’s Frankenstein Meets The Wolf Man, 1945’s House of Dracula, which includes Frankenstein’s monster and the Wolf Man, and four Bud Abbott and Louis Costello films where the comics meet up with each of the horror figures. Spoiler alert: they still couldn’t answer to who’s on first.

The last original story for the monster universe was 1954’s Creature From The Black Lagoon, a black-and-white 3D feature about a geology expedition gone awry when the creature, the “Gill-man,” comes out to attack the humans who have invaded his habitat. 3D may have been an early fad, but it played a major role in the success of the film. The following year, it would have its sequel, Revenge Of The Creature, and the final of the trilogy which is considered the last of Universal’s Classic Monsters series, 1956’s The Creature Walks Among Us. Of note, Henry Mancini (The Pink Panther) would score all three films and would be a major influence on Guillermo del Toro’s The Shape of Water.

Universal would remake a few of these classics with The Mummy trilogy (1999-2008) and Van Helsing (2004), and now is in the middle of the reboot era. The Tom Cruise-Russell Crowe version of The Mummy wasn’t liked, we know about Elizabeth Moss’ fear of her deceased, abusive ex in the reimaging of The Invisible Man, and on its slate are the remakes of Frankenstein, The Invisible Woman, and a spinoff of Dracula called Renfield directed by Dexter Fletcher. Instead of the comic book trend, Universal is going into their docket of horror legends and, considering the massive success of Jordan Peele’s Get Out and Us, people do want great horror films that are not slasher flicks. The next decade could be a bankroll of hits for Universal.

P.S. – Right as I finished writing this, I just came upon a 2+ hour documentary narrated by Kenneth Branaugh about the stories behind Dracula and Frankenstein at Universal. So, if you see my writing a shite, just watch this.