Featured: The Politically Charged Stories Of Corruption, Lies, And Murder 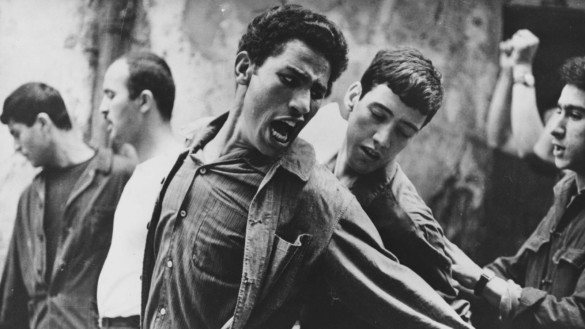 A fact about me: I have a Masters in Political Science, yet I now regret even going into that cesspool of red tape, democratic authoritarianism, pettiness, greed, power lust, gaslighting, ratfucking, cockblocking, and every other derogatory word you can describe politics as. My interest in politics in the era of Clinton/Bush-Blair relationship, the global outlook from the rise of Merkel’s Germany, Chavez’s Venezuela, Kirshner’s Argentina, Lula’s Brazil, Berlusconi’s Italy, Chirac-Sarkozy’s France, Putin’s Russia, and the history of their predecessors was a more intriguing, sane, and understanding time in the late 2000s and early 2010s. My love for movies was a hobby and understanding the political background of some films made it easier for me to enjoy while also learn a bit more about a certain country. Thanks to House of Cards, The Thick of It, Boss, and Veep, it was a good time to watch the flair of politics dramatized for a time.

Now, I hate it. I enjoyed my six years in college and wish I was there still, but now I have cut myself off virtually from the political realm because it’s headaches, heartaches, and mental breakdowns for me. But it hasn’t turned off my liking for political films, dramatized not documented, because the genre has been around since the silent film era. The Life Story of David Lloyd George, co-starring Alfred Hitchock’s future wife, Alma Reville, was made in 1918 while the title character was still Prime Minister. Mr. Smith Goes To Washington and Young Mr. Lincoln were two brilliant films about heroes against the system, both released in 1939 with its leading stars, James Stewart and Henry Fonda, being a real-life Republican and Democrat respectively and even being close friends in real life. Going abroad, dictators used fiction to depict democracy as a source of past struggles while raising their own profile.

When the Second World War ended, a more direct message of a regime’s systematic abuse was more openly produced in all languages. Here a few of those globally recognized assaults against injustice on the people.

Italian director Francesco Rosi, who also made the neo-realist Salvatore Giuliano, brought on American star Rod Steiger to play a corrupt Naples councilman who uses his power to profit from a real estate deal and is connected to the collapse of a residential building. Naples councilmen, led by a communist, go on the charge to seek the truth that is too thick to pull out. Even though he knows he will never get to the bottom of it, the viewers see how corrupt a city can truly be based on how much money is involved and connections with the Mafia. Except for Steiger, the others were actual real-life members of the Naples city council, who had to act for Rosi a scene where they all say they are not corrupt.

There are so much power and so much versatility in this film which is why it is in my Top 10 Criterion films. Italian director Gillo Pontecorvo shot on location in the newly independent state of Algeria and re-creates the bloody conflict in the 1950s between Algerian nationalists and the French military who seek to shut the revolt down in order to keep their wealthy territory across the Mediterranean. On one side, guerilla fighters will shoot officers at any given moment and bomb popular places. The other, the military resorts to all forms of torture to get intel. The cinéma vérité filmmaking within the streets and in the Casbah, combined with documentary-like editing and Ennio Morricone’s socio-military soundtrack, is an eyeopening experience that was still sensitive to everyone because of the horrific bloodshed but carries on fifty years later.

Costa-Garvas struck deep in protesting his native Greece under a military government at that time (it was produced in Algeria) with a thinly fictionalized portrayal about the assassination of a popular left-wing politician by far-right extremists who are connected to police officers and army officials. With Yves Montand as the fallen politician and Jean-Louis Trintignant as the magistrate seeking the truth, it is a thriller that is loose and fast (its editor, Francoise Bonnot, won an Oscar for her work; she recently died) and gives the personal reality seen around the world at the time of witnessing a hero fall in thanks to fears of others, as it was with Robert Kennedy and Martin Luther King Jr. one year before in the US. Z refers to the ancient Greek verb zei, or “he lives,” defiantly saying the legacy of the murdered politician will never go away, which was the case when Greece returned to democracy in 1974.

“Everything is fine,” in translation, Godard, a Marxist who took his cinema to a radical level at this point, brought in Yves Montand and Jane Fonda, both noted leftists, as a French husband and his American reporter wife who cover a strike at a factory. A critique of marriage, capitalism, and French society after 1968, Godard uses very long takes and breaking the fourth wall in monologues of both the factory worker and the manager who explain themselves, as well as the craft of the camera going across the cross-sectioned building and passing through walls into every room. While the global revolution had died down a bit, the mood was still present in France. As Godard stated, “The problem is not to make political films but to make films politically.”

Here’s a documentary, up close and personal, of the psychopathic dictator of Uganda who is responsible for the deaths of hundreds and thousands of people in his rule from 1971 to 1979. Barbet Schroder (Reversal of Fortune) and cameraman Nestor Almendros (DP of Days of Heaven) got access to interview the man who once said he idolized Hitler and showed off his “invasion” of Israel when that day came. He’s a buffoon that, at best, was lovable and playful, but, at worst, had no qualms of executing anybody. In fact, when Amin asked Schroder to cut some scenes and Schroder refused, Amin held 200 French hostages in Uganda and Schroder complied. They were put back in after Amin’s fall, but what was seen off-screen and on could not have given a more clear picture of a murderous egomaniac.

These directors went on to make more great political films. Garvas responded with The Confession, State of Siege, and his Oscar-winning Missing. Rosi would follow up with The Mattei Affair and Lucky Luciano. Pontecorvo had Kapo and Ogro, Godard remained around the experimental and social realist with Film Socialisme in 2010, and Schroder made the political documentary Terror’s Advocate. Others have also struck hard across the world with provocative works about the political class and reflecting on a country’s rough history. They tread dangerous waters and know the opposing side will cry foul, but this is what the political genre is about: truth-telling, idea sharing, and reflection on the status of the world.