Featured: ‘Shoah’ – Claude Lanzmann’s Legacy On The Darkest Of Histories 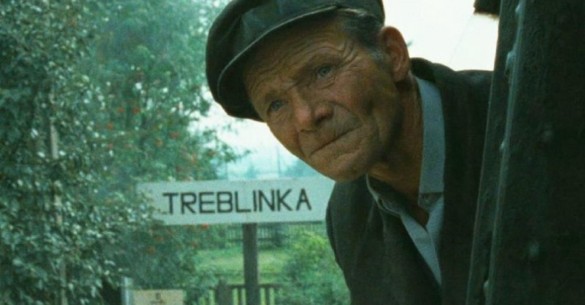 When the acclaimed documentarian died aged 92 on July 5, I tweeted out that Shoah, his haunting nine-hour-plus story about the events of Poland’s extermination camps was on another level as a documentary. Like James Joyce’s modernist novel Ulysses or Tony Kushner’s epic two-part play Angels In America, Shoah is on its own category of storytelling about a horrible truth. It is not a simple reenactment or newsreel telling of the Holocaust, but being on location filming the sites as they stood. Documentaries usually rely on newsreels and voiceovers, but Lanzmann managed to evolve what was supposed to be a two-hour project into a visual non-fiction novel.

Shoah took eleven years to make because of financial problems, the challenges to find willing interviewees, death threats against Lanzmann, and the amount of footage he accumulated in his search – approximately 350 hours. To do the math for you, that is two weeks worth of film. Make your own jokes about Stanley Kubrick’s never-ending amount of takes and the million feet of celluloid Terrence Malick uses and then leaves on the cutting room floor. But, for such a project and for such a story that requires precise accuracy and care for detail, Lanzmann needed to shoot for eternity to respect those who are alive and honor the dead in the 20th century’s greatest crime.

This was cinema’s Schindler’s List eight years before Spielberg churned out the masterpiece because this was something unheard of at the time. The style that Lanzmann proposed was going to be strictly first-hand by those who participated, such as surviving Nazi officials, former prisoners, and those who may have lent a “helping” hand to the Nazis in Poland. The subject of Poland’s role is very controversial today still as it was in 1985; the country condemned the documentary as biased, putting the entire country as complicit rather than acknowledging the fact that many citizens helped hide or move out Polish Jews from harm’s way. In the film, some state they knew what was happening, but plead that they feared for their lives and were too busy trying to fight the Nazis. Others break down in remembering the horrid details of prisoners singing entering the gas chambers; one survivor, a barber who moved to Israel, gave his testimony while working and hesitated at times. On the film’s original poster was a Polish train conductor who talks about his role in transferring prisoners to Treblinka and that he did so aware that he would’ve been put in a work camp and killed. Vodka was his go to to make him less aware.

The most daring feat by Lanzmann was the use of hidden camera footage when talking to the Nazi officials who lived in anonymity and agreed to speak but not on camera. Franz Suchomel spoke about how they gassed their prisoners, disposed of their bodies, and sang a song about Jewish prisoners not knowing what was about to happen; we see it through the hidden camera in a van that was connected by a transmitter. Lanzmann shows this to us right before we get our first glimpse at Suchomel, who died in 1979. At this time, Israel’s government and Holocaust survivors were on a crusade to make people not forget the past, to not let society absolve itself for permitting the rise of Nazism, finding and tracking down guards and officers who have evaded justice. Here was one who openly talked about it in great detail not denying anything.

The purpose by Lanzmann was to give testimony by those forgotten and not mentioned in the Nuremberg Trials and not just contain it to books or dramatic movies who keep the focus of World War II on the invasion of Normandy or life under Fascist Italy. As a Jew who grew up in France in the 1930s, he was still the victim of backdoor anti-Semitism from other kids; the remnants of the Dreyfus affair was still around. He survived under Vichy rule and took part in the French Resistance like his father did and became more active through Jean-Paul Sartre’s book about anti-Semitism. Aware more of Jewish identity, Lanzmann, who was approached to do it, went the extra mile for the intimate details of these events, letting the camera roll and his subjects speak freely. 220 hours of Lanzmann’s interviews survive at the United States Holocaust Memorial Museum in Washington, D.C. They will survive forever, under the conscious of many who have seen Shoah (Criterion came to rescue in 2012 with its restoration and re-release), and under the guide of Claude Lanzmann.