Featured: Rockumentaries From The 60s 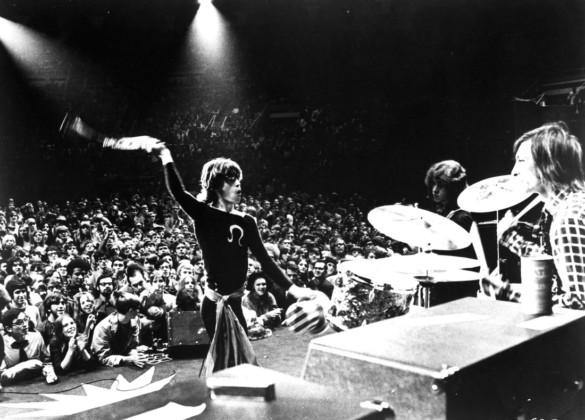 I’m a classic rock guy. Even though I am 28 years old, I was introduced to bands like The Rolling Stones, Led Zeppelin, and U2, and solo artists like Elton John, Bob Dylan, and Eric Clapton by my parents. The new stuff today? Let’s just say it’s not my cup of tea. I like to joke that I was born in the wrong era because I’m way behind on current trends with music, TV, some social media, and even movies. I’m of the opinion that most movies of today are not that good in quality; some are, most aren’t. But, let’s stick with the rock music and movies for the moment because their work has been immortalized on natural celluloid, capturing some of the most exciting, blazing, and for one film, a deadly moment in rock history.

Actually, there is no apostrophe in “don’t,” but I’m getting bothered by Grammarly, so I’ll put it there. But D. A. Pennebaker’s capture of Bob Dylan’s England tour in 1965 puts you right next to the man himself. It starts off with his famous music video for “Subterranean Homesick Blues” and his cue cards. As the blossoming legend, we know him as today, the 20-something at the time is bold and charming, but a bit smug and confrontational at times. Multiple musicians make cameos as we see Dylan go venue to venue playing his hits. It is all summed up at the end when he reads a critic describing his work as one of an anarchist. Dylan replies, “Give the anarchist a cigarette!”

Pennebaker followed that up with his coverage of the legendary concert that served as the warmup to Woodstock. Initially, it was to be a documentary on ABC, Pennebaker got an advanced reel-to-reel recorder from The Beach Boys for the sound to give audiences in theatres the surround sound as if the show was live. The Mamas & The Papas, Simon & Garfunkel, and The Who were among those who performed for the thousands and thousands that came, igniting what would be as the Summer of Love. But the most legendary performance of all was Jimi Hendrix, who played his rendition of “Wild Thing” at high volumes, presented himself in a vivid, colorful, and sensual fashion, humping and plucking the guitar with his teeth, For his finale, Hendrix smashed his guitar, put lighter fluid on it, and set it ablaze. He then fell on his knees and made the fire rise above him, sending the crowd into a frenzy with something they had never seen before.

The Rolling Stones got into the action with their own concert film, but it would turn out to be something absolutely different than they expected. Instead of going to Woodstock, they performed their free concert at Altamont in California. Issues of crowd control and the idea of hiring the Hell’s Angels as security quickly arrived. Fights broke out along the stage in which Jefferson Airplane’s Marty Balin took an array punch and The Grateful Dead backed out of performing when told of the violence. The Rolling Stones came on at night and, during the performance of “Under My Thumb,” a cameraman catches the tragic moment when an 18-year-old concertgoer pulls out a gun and a Hells Angel member stabs him to death. In JFK fashion, when Mick Jagger watches it in the editing room, we see it played, rolled back, and played in slow motion. The end of the “Flower Power” generation – and the 60s – is in front of us.

An epic of documentary proportions, the three-day festival touched upon the shows and the audience, immortalizing what was legendary about the performance and the entire era. From Richie Havens opening it to Jimi Hendrix closing it with his also legendary rendition of the Star Spangled Banner, it is able to successfully make the show a nutshell showing, even though we’d want more after 3 hours (120 miles of film and 16 cameras were utilized). It was also a smash at the box office, grossing over $50 million. It included two Oscar nominations, including a film editing nod for Thelma Schoonmaker, who took the footage partially shot by friend Martin Scorsese and improvised cuts of reaction shots, close-ups, and split-screens mixed in with crisp-clear sound. It may be the ultimate concert film.

The late 1960s was a time to rock and to inspire a new generation of rockers and fans for the years that followed. Thankfully, a few people were around with cameras and became flies on the wall to capture the action from legends that are now dead. These rockers are immortalized forever in their music and in vision with these incredible pieces of footage that have survived and continue to be an influence to documentary music and relive decades of concerts for the future generations that have followed since.