Featured: Renoir’s Own Rules Of The Game 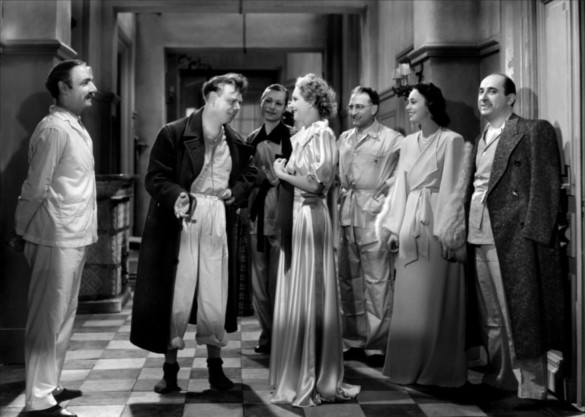 Jean Renoir was the son of famous painter Pierre-Auguste Renoir. With his fortune, Jean was sent to the best schools, but he was never a fan and ran away often. To him, it was just being another figure in the status quo, the bourgeoisie that was born in. Wounded in the First World War, he discovered the moving camera and decided to take his talents into the fledgling industry. The 1930s was a success for Renoir with La Chienne, Boudu Saved From Drowning, The Crime of Monsieur Lange, and La Grande Illusion, which became the first foreign film to be nominated for Best Picture at the Academy Awards. In comedy and drama, Renoir always made social classes a theme in his movies.

To finish the decade off with a bang – especially with the Second World War looming – Renoir decided to make a direct attack on the class he grew up in and detested. Arguably his best film, The Rules Of The Game satirized Haute bourgeois with a blitzkrieg of faux manners and attacked what he saw as their own degenerate, self-loathing customs that made France be aloof to what was going on around them. Even though they were 20 years free from war, it was obvious that the peace would be formally broken, and Renoir decided to make, “A precise description of the bourgeois of our age.”

An Ensemble Of Elite Imbeciles

At a chateau, one weekend, a wealthy woman, Christine, wants to be happy but is confronted by her ex-lover aviator, Andre, whose last accomplishment failed to bring back in love with him. Octave, a friend of Christine, will help her get to a find someone she can love as her husband, Robert, is having an affair, only to find himself in love with her. Other guests at the chateau feature more friends – husbands and their wives featuring secret lovers – all making a getaway to their usual country estate visit. In a Gosford Park setting, in which they hunt and have fancy dinners, there will be comical consequences and farce, as well as a tragedy that awaits. This is what the wealthy did and loved to do, even with the greyness of war right next door. For Jean Renoir, they refused to deviate from their little strict norms and, while the love is genuine, the fact that people would “dance on a volcano,” as he described, was egregious and was willing to take the risk of producing the story himself to get his point across.

The most notable quote from the film is also reflective of what Renoir was talking about in his previous films and was perfect for Renoir to say it himself in the film: “The awful thing about life is this: everyone has their reasons.”

What reasons could they possibly mean? The opening scene shows Andre returning from another aviation attempt that is successful, only done to attract Christine. When she isn’t there, Andre denounces her for not even being present, although she is listening on the radio. Men will do anything to attract the woman they love, married or not. “She’s a society woman, and society has strict rules,” Octave tells Andre. Outside of the main figures, the assistants, such as the gatekeepers and waiters, all know their place and just nod along referring to their aristocratic bosses as, “your lordship.” When a poacher is caught trying to steal the rabbits, he is hired as an assistant and he ends up flirting with Christine’s maid. Liaisons are rampant and the idea of discretion is disregarded. The sequence in which there is a fight within a fight and a hilarious chase sequence between jealous rivals symbolizes the abusrdity of the whole situation in Renoir’s scenario.

Besides the themes, the physical use of the camera was noticeable with deep focus shooting that Orson Welles, an admirer of the film, would borrow for Citizen Kane. This was needed in the large rooms and long corridors of the chateau to allow the camera to move anywhere, as well as keep the focus on the actors wherever they went. The rooms are expansive and the whole mise en scene from what they wear to what is in the room has to be captured to reflect the physical possessions these people are into. The same goes for when they are outside the chateau and on the fields. The rabbit shoot sequence is the only part that features any quick cuts; my apologies to animal lovers when I say that dozens of rabbits were let loose and actually shot on site. Many of the scenes are long takes with continuous dialogue and action that fills up the screen, allowing many to be in one single shot, talking over each other.

Like all masterpieces, the film was to be ridiculed, but in a manner that was quite shocking. Critics and audiences hated it so much that they viciously heckled at the screen and a member of the right-wing press, furious at Renoir’s left-wing views, tried to set the theatre on fire. Yes, instead of trying to buy the negative and destroying it, someone thought of burning down the house. Clearly, the picked up on Renoir’s intention, mocking the more affluent, which was seen as unpatriotic and unbecoming for a Frenchman of his status. The film was cut multiple times by Renoir to his disgust and the film was banned after the outbreak of war because it was seen as depressing and could lower morale. Saddened by the stunning failure and butchering of his film, Renoir thought of quitting films but then moved to the United States when the Germans threatened and continued his career from there. He would return to France after the war to make his gorgeous Technicolor pieces The River, The French Cancan, and Elena And Her Men.

It’s revival and restoration as a masterpiece came in 1959. Thought to be destroyed by bombs, the negative survived and sound prints were found to let it be painfully reconstructed to the current 106-minute version that can be owned. Renoir sobbed when seeing his film reborn and the legacy of The Rules of The Game was cemented. Peter Bogdanovich, Noah Baumbach, Mike Leigh, and Robert Altman (“The Rules of the Game taught me the rules of the game.”) praised the film as a massive influence in their careers. Before the restoration, one of the shortened versions was available and has been on Sight & Sound’s Top 10 list of greatest films of all time since its establishment in 1952. Come 2022, it may as well be on the Top 10 again.