Featured: Let’s Frolic – Friends And Their Fun On Film 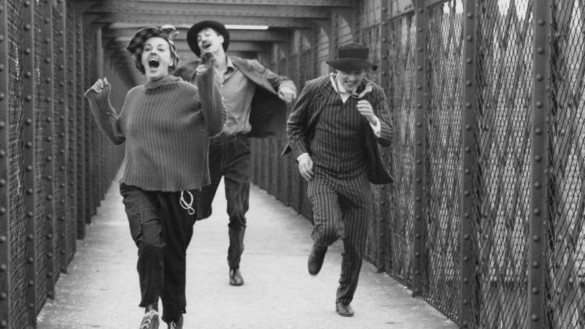 Friendship is everything in life, especially when we are young. In every country, the young learn the easy and hard ways of maturing into adults or rebelling. But those already adults don’t mature at all and have their funny ways of getting by. Love is fleeting and ideas come and go, generations live in eras that are defining, and youth is still misunderstood because of the hopes and desires (or lack thereof) by the figures in question. These are the themes of the works I refer to as frolic films because that is what the characters do and scenes portray and happy and experimenting generation of people. Here are some of my favorite “frolicking” movies.

Federico Fellini’s story (the title has multiple interpretations; it was released in the U.S. as The Young and the Passionate) follows five young friends at major points in their lives who are portrayed in an Italy that was now free from their fascist past but are now immature, lazy, and have no idea what they want to do. They are all past the age of twenty, unemployed or doing odd jobs, and spend most of their time going to bars and walking along the beach talking it up. No one is necessary happy there but there is nowhere to go because they are still dependent. But the journey follows them through their own transgressions and ways to move forward – if they can prevent themselves from going two steps.

Francois Truffaut’s love triangle that endures before, during, and after World War I is a free-spirited tale told from the shy point-of-view of the Austrian Jules who befriends the outgoing Frenchman Jim and later run into the happy Catherine, who affected both men by their interest in her. The three of them remain close, even as Catherine marries one and seduces the other. It is a very tight relationship as seen with the noted chase across the bridge and is completely characterized in the performance by the late Jeanne Moreau. She is a whirlwind in this entire film that keeps the two men close regardless of nationality and tests their loyalty.

Godard had his own love triangle in the contemporary and radical style he was always known for. Two friends, Arthur and Franz, learn from a pretty girl, Odile (played charmful by Anna Karina, Godard’s then-wife), about money in her aunt’s home outside of Paris. Franz, Arthur, and Odile decide to rob the home; before they move ahead, the three have fun dancing the Madison, run through the Louvre, and saying nothing to each other for thirty-six seconds. More jump cuts plus long takes and an insert of various pop culture references and code language adds to this heist-style film about young friendships and taking the fun too far.

The rock opera musical from The Who sends us back to the era of mods and rockers and follows a sixteen-year-old mod named Jimmy who escapes his dead-end life for one of taking amphetamines, motorcycle riding, and fighting. He joins the gang who get into a street war with the rockers in Brighton (Sting plays an idol mod of Jimmy’s) but soon learns that not everything is what it actually is in the mod life and pays an emotional price for it. The rockin’ music accompanying it with the mood of liberty in a changing time – 1964 – elevates the entire social piece that follows Jimmy all over. It is about social growth with the post-war generation gets involved deep into things never seen before at the time. Mod or rocker, they don’t care; they just want to have fun.

Boyhood and the Before trilogy are part of Richard Linklater’s lengthy success, but nothing spells fun amongst ourselves than his second feature with a bunch of young, upcoming actors including Ben Affleck, Jason London, Parker Posey, Anthony Rapp, Adam Goldberg, and – maybe the greatest of all – Mr. Matthew McConaughey. (This clip above of his audition is a doozy.) In less than 24 hours, the last day of school and the night party that follows all ages, we bounce from place to place reliving a day in the like of 1976 Texas. These interacting stories make it so relatable because its the same type of behavior teenagers are doing today and it helps to have a killer soundtrack; I’m a classic rock fan, so I am biased to what was playing in 1976.

Young people like to frolic before reality really kicks and the traditional way of life – full-time job, wife, children – starts. Some people just don’t want to grow up and want to remain attached to the other young friends. They want to go out party, find random love and do childish things before 30. Matthew McConaughey’s character is in his twenties but he still hangs around teenage girls and the five 20-something on the Italian coastline find themselves at a crossroads. The “white heat” of the 60s let the British youth shag everything left and right while twenty years and opposing sides of a wat does not split up a trio in their own kind of romance. And young people have no respect for manners and run through museums chasing made up record times. 1920, 1964, or 2018, everything is the same.