Featured: Initial thoughts on teaser trailer for Rogue One: A Star Wars Story 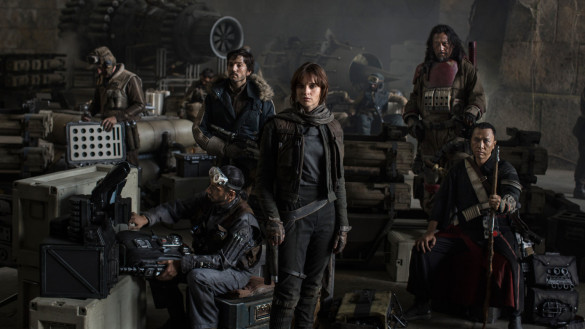 So, you’ve all seen by now the new teaser trailer for Rogue One: A Star Wars Story that dropped earlier this morning (if not, you can see it below). It’s very exciting on a few accounts. One, this is the first film that will be outside the normal “Episode” chronology that we are used to seeing. According to the film’s synopsis, Rogue One: A Star Wars Story will take place right before Episode IV: A New Hope and is about the group of rebels who stole the plans for the Death Star. I just get chills thinking about that. Secondly, the film’s cast is quite remarkable. Felicity Jones, Mads Mikkelsen, Alan Tudyk, Ben Mendelsohn, and Forest Witaker among many, many others is pretty stellar. Disney hiring talent is never a bad thing. You want to make a great story, for sure, but this talent on screen will go a long way. And thirdly, this is a war film that will lead directly into the original Star Wars film. Think about that for a second. This will be a war movie. Disney hired the same people who helped make Saving Private Ryan and Black Hawk Down. A war film in the Star Wars Universe? And at the end of this big battle, the rebels steal the Death Star plans that send Darth Vader into the frenzy at the beginning of A New Hope? Yep, sign me up. Like, right now.

As for the trailer itself, I loved it. The “Star Wars” and “Force” themes remixed in the background are stirring and they cut it ambiguously enough that it doesn’t give away too much. “But JD, this is a teaser trailer, of course it doesn’t show too much.” Yeah, well, trailers now-a-days tend to give away a lot, so when it’s done right I don’t take it for granted. Jones looks remarkable. She’s “reckless and undisciplined” but seems incredibly badass, which you probably need to be if you’re going to steal the death star plans from Darth Vader. I’m sure there’s exposition missing here that we’ll find out about her, but this teaser did everything to get me on board with her character. The few glimpses we get of Mendelsohn and Donnie Yen are also intriguing. The mystery behind them at this point is a great move, I think. Forest Whitaker has some great dialogue in the second half of the trailer too that helps set the tone for the film’s action as well as some of the film’s themes.

I’m not a huge trailer guy nor do I enjoy picking apart every second of a trailer, so I’m not going to do that. However, the film did make my Top 10 Most Anticipated of 2016 and the fact that it won me over emotionally and intellectually is important as well as exciting. I loved The Force Awakens and how J.J. Abrams made the experience fun but also emotionally potent. And while I was a bit dubious at first about these spin-off films, Rogue One: A Star Wars Story seems to be carrying the momentum that Kathleen Kennedy and her team made during The Force Awakens. The film’s concept was enough for me to put it into my Top 10 Most Anticipated and after seeing this trailer, that visceral anticipatory feeling has been validated. The trajectory this saga seems to be heading is riveting on levels words can hardly describe.