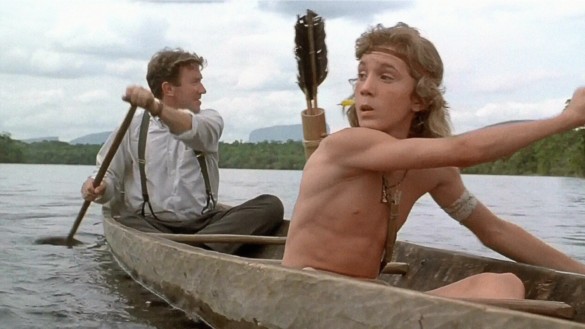 I was sitting on my bed this morning, feeding my 2.5-month old daughter while my wife watched The Santa Clause. And since it is still the month of insert-festive-celebration-of-your-choice-here, I figured I’d pick something connected to The Santa Clause. Indeed, I did really enjoy it when I first saw it. But then it hit me that it would be funnier to cover another Tim Allen film instead. So, here is my nostalgic look-back at Jungle 2 Jungle!

This film should not be one I like as much as I do. As cold-hearted and unfeeling as I am now (Seriously, ask anybody!), I was more so at the tender age of 10. Now I may not have seen this in the cinema, but this film came out then and I don’t recall the exact age I watched it first so 10 will have to do for now. Anyway, at its heart this film is a story about a man coming to love his son and the son falling in love. Oh yeah, there’s also a Russian mobster who sells caviar, a gold-digging fiancée and urination into a fake plant. So classy all the way here.

Maybe I should pause and say that I know it’s not a good film. It was an American remake of a French film (never a good start) made by Disney in the 90’s. It stars Tim Allen, who I really enjoyed in Home Improvement and the previously mentioned TSC but had never seen in anything else, and Martin Short. For those who were raised in the US, Martin Short was not widely known to people growing up overseas. The only things I have seen with him in outside of actively looking for films are Father Of The Bride and Mars Attacks!. So two guys with limited film back-catalogues in a Disney film about a boy raised in the jungle moved to the “urban jungle” of New York. Yeah. It’s pretty much as well done as you’d expect.

However, despite all that, it’s still a film I think about fondly from time to time. It’s silly, it’s not too serious and I think it’s definitely one of those films that was an instant classic if you were the right age when you saw it. Tim “The Tool Man” Taylor finally doing something that wasn’t all slapstick and mugging (I defy you to watch The Santa Clause and tell me that he’s not still doing the occasional Tim Taylor-ism). Sam Huntington was really good as Mimi-Siku. And I’m not saying he was good for a kid. He was, possibly, the best actor in the film. And I’m not trying to say that in a negative way, it’s just a fact. It’s a film that is willing to go with a ridiculous premise and give it a ridiculous “villain” to go along with it.

I know that reading my thoughts will not change anyone’s minds about the film if they’ve already seen it. However, I will urge anyone who hasn’t yet seen it to give it a go. And if you do, try to go into it remembering the time it was made. Yes, it’s strange. Yes, it’s not an example of brilliant acting. Yes, I admit it’s not even that great. But it’s fun. It’s charming. It does the main focus right. The heart is there, beating away despite all the cheese dripping from it. You may not love it, but I do. And after all, that’s the only thing that matters.

So, as I’ve randomly decided for these “reviews”, I need to assign a score. And this one leaves me with no choice but to give it a Nostalgic Feeling rating of…..

12-Year Old Me Chilling On The Sofa After School

And so, after all that, there’s only one thing left to say;