Featured: How does the Cornetto Trilogy rank? 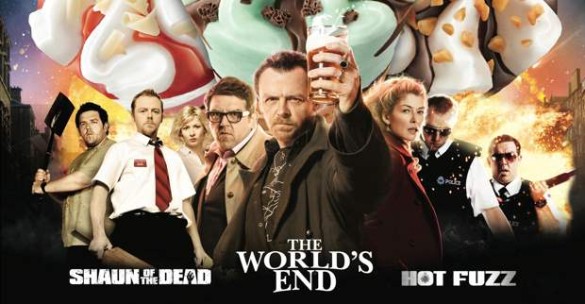 With The Worlds End coming out this weekend, I’ve been wondering how the Cornetto trilogy ranks among other trilogies. And to be honest, I think it’s kind of a tough question and it depends on how you classify it.

In terms of comedies, this is easily one of the best, if not the best of all time in my mind. The brilliance of these satires are incredible. It’s the sometimes subtle, but hilarious moments that make these films amazing to me. Such as the scene in Hot Fuzz where Simon Pegg’s character is checking in to the hotel and there is the interaction with the old-lady and the crossword puzzle. Brilliant. Or perhaps when the boys and their friends cross path with another group of people in Shaun of the Dead and as they are passing each other, each group has a member that looks eerily similar to a person in their group.

I also love the ending to each film and how they play (or not play) on the stereotypes. The ending to Shaun of the Dead is a little bit different than the normal zombie movie, especially at that time. It was funny, while perhaps not as tragic, I think that was the whole point. I would prefer a dog as a pet, but in a zombie apocalypse, that’ll have to do. The ending to Hot Fuzz was also just as smart, especially with the relationship dynamic between Nick Frost’s character and his dad. Add to the mix the hilarity of the Bad Boys 2 and Point Break spoofs. This pretty much sums it up:

The play on each genre is really well put together and they seem to play on every stereotype you can think of that just makes it a ton of fun. Each character and scene is really well thought out and it’s the detail they put into them that make it so funny. I mean, how can you not like them? So yeah, as far as comedies and trilogies go, this is easily up there.

As far as trilogies in general go, well there are many it can’t and won’t compete with. But they’re never meant to be huge blockbusters that will garner millions of fans all over the globe. They are small films meant to play on the stereotypes of these particular genres so don’t expect Oscars here folks. In my opinion, if you’re not having fun with these films, you’re missing out on the whole point.

While I haven’t seen The World’s End yet (seeing it tonight, look for our review soon!), I can’t imagine it’ll be a let down. Especially since right now, it currently holds a 96% on Rotten Tomatoes.