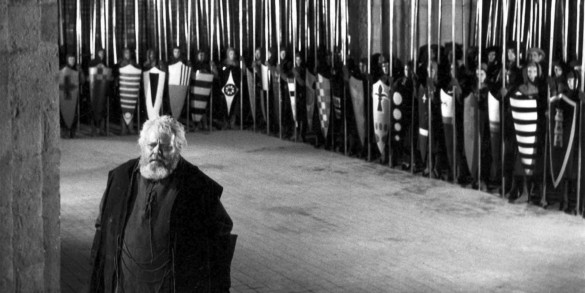 I am not superstitious, so to release my 13th piece on my Criterion Cruising list this thirteenth day should not spook you. After all, we got another selection of films that have been part of the Criterion Collection before in different genres. So, what do I have for you, my readers?

One of Orson Welles’ biggest struggles to make (of course, The Other Side Of The Wind takes the cake), he centers the story around the character Falstaff and his close friendship with Henry V, then known as Prince Hal. Using five different Shakespeare’s plays plus Holinshed’s Chronicles, Welles created an original work of art that received positive reviews at Cannes but was then disregarded by critics. Regardless, it was Welles’ favorite film to make, especially when he pretended to shoot a version of Treasure Island so he could get funding to make Midnight, and his production was saved by Harry Saltzman, one of the original James Bond producers. Legal issues kept the film out of sight for 50 years until Criterion bought the rights, restored it, and released it in 2016. Attached is a Q & A of the film with co-star Keith Baxter, who played Prince Hal.

The film adaptation of the popular musical from Lionel Bart based on the famous novel by Charles Dickens was the first Best Picture winner in the MPAA era (it was rated G in contrast to its winning successor, Midnight Cowboy, which was rated X) and the legendary Carol Reed took home his Best Director Oscar. Coincidently, his nephew was Oliver Reed, who starred as Bill Sikes, the malicious antagonist in contrast to Fagin, the common thief and gang leader of the homeless kids Oliver Twist joins. It is a musical that appeals to all and is wonderfully directed through the dirty streets and the wealthy lands of London.

The first of only six directed features, Carroll Ballard’s feature debut (he made documentaries prior) follows a boy who survives a shipwreck becomes friends with a beautiful horse on an island. When the two are rescued, he learns how to ride it for major competitions with the help of a retired jockey. Ballard took risks, some that would never happen today, and captured (with the help of DP Caleb Deschanel) a magical story similar to star Mickey Rooney’s other horse film, National Velvet. The film got its producing backing from Ballard’s friend, Francis Ford Coppola, who was busy salvaging the mess that was Apocalypse Now, and the script was co-written by Melissa Mathison, who would be hired by Steven Spielberg to write E.T.

Writer-director Bill Forsyth’s charming dramedy on becoming a new man amongst a new set of people is a tale of the little guy fighting the corporation he was supposed to represent. This isn’t Dark Waters or Promised Land, but a comedy-drama about finding yourself in a place far from home that seems perfect to be a part of. That is the irony of the title, where an oil executive with a Scottish-sounding surname, who isn’t really Scottish, goes to a village where his company and the eccentric boss want to buy and built an oil refinery there. Starring Peter Reigert, Burt Lancaster, Fulton Mackay, and Peter Capaldi.

Based on a true story, a man pretends to be a famous filmmaker in order to meet people who he tried to convince to star in his movie. Abbas Kiarostami first intended it to be a documentary on the would-be imposter, Hossain Sabzian, filming his trial, then intercut it with a reenactment of the meeting portrayed by Sabzian and the actual family who were being conned. Kiarostami’s quick, bold thinking (he read the case in a magazine, quickly called Sabzian, and spoke to everyone involved) was an acclaimed tale of cinephilia and fulfilling a desire that was in the Top 50 of Sight & Sound’s Best Movies Of All Time.

We lost the great Max von Sydow this past Sunday, aged 90. In a career spanning 70 years, he was first seen collaborating with the great Ingmar Bergman for 11 movies before crossing over to Hollywood starting in the mid-60s. Father Merrin in The Exorcist, Jesus in The Greatest Story Ever Told, the knight battling death in chess in The Seventh Seal, a mute old man in Extremely Loud and Incredibly Close, the patriarch moving his whole family to America in The Emigrants and The New World. The aging resistance fighter in Star Wars: The Force Awakens, and, in more recent times on TV, the Three-Eyed Raven on Game of Thrones. His range was something to admire and how seriously he took every role that made him stand out. It’s a big loss for global cinema, but the depths of his work will forever be enshrined as being a pound-for-pound standout. Farväl, Herr von Sydow.