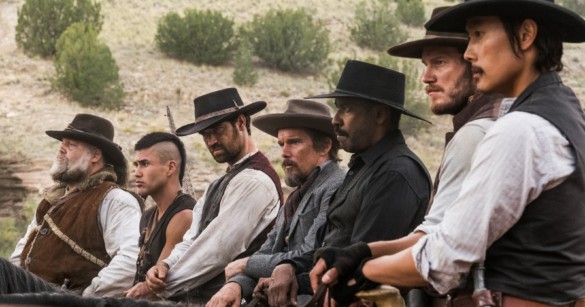 This weekend on Episode 187, we’ll be discussing Antoine Fuqua’s new film The Magnificent Seven. This film is, of course, a remake of John Sturges’ 1960 film of the same name, which in itself was a remake of Akira Kurosawa’s 1954 Japanese-language film Seven Samurai. It’s easy to question why Fuqua’s remake needed to happen, but for as iconic as Sturges’ version is, this narrative is ripe for a modern re-telling. It’s the classic anti-bullying story that is easy to relate with for many of us. It has also been 56 years since The Magnificent Seven hit the big screens, meaning this story could be new to a lot of young faces out there. Personally, I’m not against remakes if there is a clear vision and purpose for the film. Based off of the marketing for Fuqua’s version, I can see seeds of that in the imagery. We’ll see if that is really the case come this weekend.

Modern technology could benefit this new re-telling as well, which is easily one of Fuqua’s biggest strengths as a director. I’m not the biggest fan of his storytelling, but there’s no question that Fuqua is a stylistic director that knows how to handle a camera. His films are always visually appealing and I have no doubt that he will, at the very least, upgrade this story from a visual perspective.

Another reason to be excited for The Magnificent Seven remake is this cast. The film stars Denzel Washington, Chris Pratt and Ethan Hawke in a Western setting. Um…hell yeah! Additionally, we’ll see the likes of Vincent D’Onofrio, Byung-hun Lee, Peter Sarsgaard and Haley Bennett. Good God, that is a wonderful cast. This film *should* be a lot of fun given the talent involved with this film. Even if the film is disjointed narratively, and given Fuqua’s history that wouldn’t surprise me, it should at least be very entertaining.

Perhaps the biggest reason that I’m personally excited for Fuqua’s The Magnificent Seven is that it is the last score we’ll hear from the late-great James Horner. Apparently, Horner was so inspired by Fuqua’s vision that he wrote the entire score before his fatal crash last year, before the film was even shot. Of course, given how creative projects are always evolving, the score needed some updates but I’m so curious to hear what Horner had in store for this film. I’m specially excited given how iconic Elmer Bernstein’s score is for Sturges’ 1960 version. Regardless of how it ends up, I’m betting that it will be sentimental on some level. I love Mr. Horner and may he continue to rest in peace.

For those that are automatically discounting The Magnificent Seven remake-remake, I don’t blame you. Did this *really* need to happen? Probably not. Kurosawa’s Seven Samurai is one of the most legendary foreign-language films we’ve ever seen and Sturges’ remake is as good as it gets when re-imagining a classic piece of cinema. In theory, there is no way that Fuqua’s version will hold a candle to those two films. However, the pieces are there on paper, we’ll just have to see how the film delivers its execution.

What about you? Are you excited for The Magnificent Seven this weekend?

Here are other films you can expect to see this weekend at the box office: