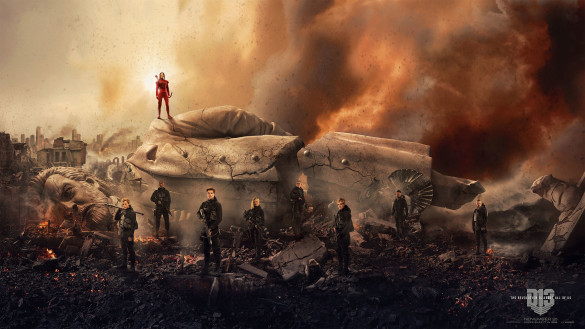 This weekend Jennifer Lawrence and company will be back for the final film of the franchise, The Hunger Games: Mockingjay Part 2. I’ve been a big fan of the franchise since the beginning and I very much look forward to the finale. The franchise has been full of rich symbolism and fascinating characters that have done a great job of representing the film’s themes. Katniss is a strong female character that I tend to resonate with, especially her early motives. Her strength is also her vulnerability, and that’s her ability to love. Her love for her sister and family. Her love for her district. And even her love for Peeta, which comes out of an exhausting, intense and almost deadly traumatic experience. It’s all worked for me and I love how it plays into the films’ overall thematic structure.

I think it’s those reasons why I really liked Mockingjay Part 1. I understand that for a lot of people it was “boring” and “slow” and there wasn’t all the action people liked from the first two films. But that’s exactly what I liked about it. We get away from the actual Hunger Games and instead get these really intimate character moments that come to define our main players involved. Katniss’ vulnerabilities, as I mentioned above, have put her in a situation she doesn’t want to be in. She has no desire to be this mockingjay symbol but she also understands the stakes and that everyone is looking up to her. That struggle I found fascinating and Lawrence was great showcasing that conflict. I felt the same way about Deadly Hallows Part 1 in that franchise too. Maybe I just like “boring” character moments more than most, but give me that stuff all day. I love it.

As we anticipate Mockingjay Part 2 this weekend, I encourage you to listen to our review of Mockingjay Part 1 that we did last year on the show, where I go more in depth of why I liked the film. Click here to listen or click on the player below.