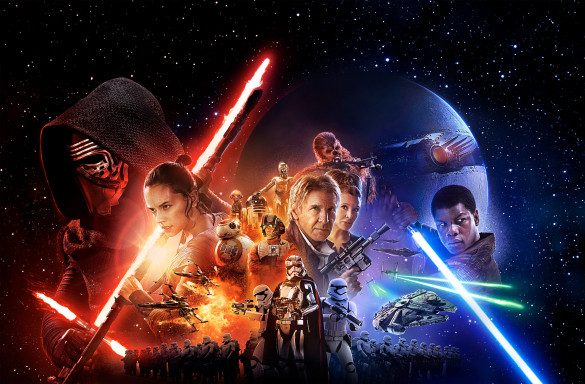 This weekend on Episode 148, we will be returning to a galaxy far, far away, as we will FINALLY be seeing the latest chapter in the Star Wars franchise with Episode VII – The Force Awakens. Already reaching $100 Million in advanced ticket sales, this is easily the most anticipated and hyped movie of the decade so far (to say the least). What a glorious time to be a movie fan.

Now, I am a huge Star Wars fan, having loved the original trilogy since I was 8 years old. I even loved the prequels when I first saw them in theaters as a kid; thank goodness adulthood allows us to learn from our past mistakes. The Empire Strikes Back still holds strong in my top 10 favorite movies of all time, and I love Return of the Jedi and the original Star Wars (yes, it is just called Star Wars) almost equally as much for their own reasons. And the fact that this film is being marketed as an aesthetic return to the original trilogy, shows that Disney buying out LucasFilm may have been for the best.

I have managed to avoid nearly all of the reviews currently out for this film, as well as all potential plot spoilers. Needless to say, I am going in with very neutral expectations; I want this film to be phenomenal, but I will be satisfied to just have another good Star Wars movie again (major thanks to the prequel trilogy for at least preparing us for any possible worst case scenarios). Even if this film doesn’t end up being one of my “best of the year” films, that won’t make it a disappointment. I’m excited that we have a focus on a new cast, a group of unknowns that will allow us to not fixate on familiar faces. But surely it’s an added bonus to see the return of all our favorite characters along the way (Luke, where art thou?!?!)

And J.J. Abrams is a director I truly admire as well; what he did to reboot Star Trek in 2009 I thought was glorious, where he did a wonderful job in balancing the old and the new simultaneously. That’s the biggest thing I’m hoping to see and feel in The Force Awakens; where the narrative goes I have no specific desires for, I just want this to aesthetically feel like that galaxy far, far away, counterbalanced with an injection of new blood and sensibilities that will only prove how timeless this saga is.

My only real worry is, with Abrams being such a big Star Wars fan himself, that this will lead to a film that leans a bit heavily on fan service, creating a rather safe film without too many surprises; this happened already in Abrams’ films Super 8 and Star Trek Into Darkness, two films he himself even recognizes had narrative issues. But even with that being the case, I firmly believe it would still make for a great stepping stone into this new Star Wars rejuvenation that Disney is thrusting upon us, but at the same time I don’t want Abrams to simply coast along in making a film that is 110% of what the fans ask for; I also want him to try and excite us for the future in a surprising way.