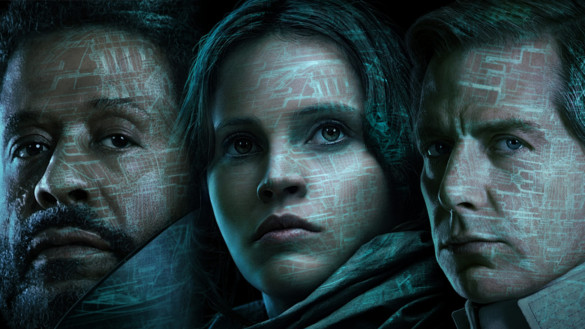 Happy Rogue One week everyone! This week is very exciting as we’ll be getting the first official Star Wars movie outside the main saga. Rogue One, not only expands the canon of this Universe, but it tells a story that most Star Wars fans have been speculating on for a very long time. Since 1977 to be exact. We’ve all wondered what it took for the Rebels to steal the Death Star plans, an action that clearly infuriated the most powerful Force user in the galaxy, and we’re finally going to get to see that in this film. As far as spin-off’s go, this is one of the better ideas for Disney / Lucasfilm to explore. Additionally to that, Gareth Edwards (the director of Rogue One) has said many times that this film is first and foremost a “war film.” Meaning, we are going to get war action from the ground but within the lore of Star Wars. Are you freaking kidding me? Maybe that doesn’t appeal to you, but I find that endlessly fascinating.

On top of the war aesthetics, we are also going to meet some familiar faces while being introduced to new ones. I don’t expect him to have a big role, but holy crap, Darth Vader is going to be in this movie. Let’s just stop to reflect on that for a second. One of the most iconic characters of all-time, a character we haven’t seen since 1983, is coming back onto the big screen in 2016. Even in a limited role, that gives me chills just thinking about it. However, I like that his role will be limited and that this particular narrative will feature new characters. Jyn Erso looks to be a strong female presence (doesn’t hurt that you cast Felicity Jones either), and if you read Catalyst, you’ll know that her interactions with Orson Krennic will surly be motivated. Both of those characters look great in the trailers and should lend themselves to great drama. One character that is also worth noting here is Saw Gerrera. The thing that’s interesting about Saw, is that he’s the first character to appear in a live-action movie even though he originated from the expanded Star Wars Universe. Saw originally appeared in the Star Wars: Clone Wars TV show, where Obi-Wan and Anakin helped him gain control over his home world during the Clone Wars. So, to see him in this movie is both exciting and hopeful that we’ll see more of that. (Hint: I want an Ahsoka Tano movie!!!)

Let’s talk about this cast. I briefly mentioned Felicity Jones above and while we don’t know much about Jyn herself, Jones is a great actress and will surly bring conviction to this character. Jyn isn’t just handed this significant of a role by accident, there is a reason she is tasked with stealing these plans and I’m curious to see what Jones brings to that. Diego Luna isn’t a name that a ton of people will know, but they will after this weekend. And it’s not just because he’s in this movie, but because his passion for being in this film is palpable. If you’ve paid attention to the marketing campaign for Rogue One, his and Riz Ahmed’s excitement to be a part of this project has been fun to watch. On top of those two, Rogue One features Ben Mendelsohn, Mads Mikkelsen, Donnie Yen, Alan Tudyk, Forest Whitaker and JAMES EARL JONES (::loses breath::). For all the problems, this film may have, acting will surly not be one of them. And again, let’s not lose sight of that. This franchise, for as much love as we all have for it, has been known to have average to less than average acting at times. So, getting talent of this caliber is refreshing.

If you’re familiar with Rogue One at all, the reasons I mentioned above are probably nothing new to you. So, the last thing I’ll just note here real fast is that this is the first Star Wars film to feature a score from someone other than the great John Williams. However, if you’re going to replace him, you don’t get better than Michael Giacchino, who is arguably the best composer working today in Hollywood. I’m very amped to hear what Giachhino brings to this world. I have no doubt that he will be one of the highlights here.

All of that said, how excited are you for Rogue One: A Star Wars Story?

Here are other films coming out this weekend: