Featured: Anticipating Fantastic Beasts and Where to Find Them 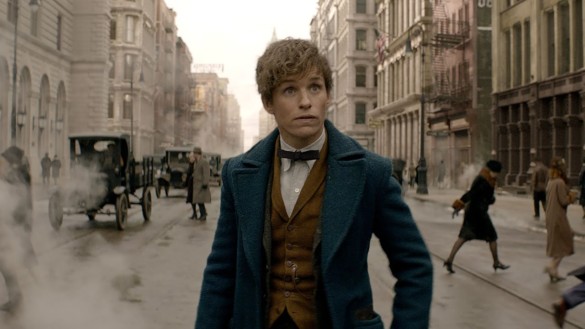 If you scour the internet for movie podcasts, it’s going to be hard to find one that features two hosts that are bigger Harry Potter fans than we are. If you listened to our Harry Potter Movie Series, hopefully that is evident. It’s been a few years now since the release of Harry Potter and the Deathly Hallows Part 2, so it’s really exciting to have the opportunity to jump back into that world with Fantastic Beasts and Where to Find Them. Fantastic Beasts is actually a prequel that takes place several decades before the events of Harry Potter, which is probably a good thing since we don’t really need to further Harry’s story at this point. This world is so large and there are many other stories that can be told. Speaking of, it doesn’t hurt that this particular narrative is written by J.K. Rowling herself. She may not be an established screenwriter, but who else knows this world better than she? It should be interesting to see how that transition holds up.

Another reason to be excited for Fantastic Beasts and Where to Find Them is that it’s directed by David Yates, who directed the last four Harry Potter films. Yates brought a dramatic and thematic consistency to those films that brought real potency. The action was fantastic and he arguably got the best performances from that franchise. In that regard, it’s not a surprise to see him back in the directors chair for Fantastic Beasts and Where to Find Them, as well as its planned four sequels. Yates may not have a deep resume, but when it comes to the Wizarding world, he is more than serviceable and I’m amped to see him back for this film.

At this point, my biggest concern is the cast. I really like Eddie Redmayne, who fits in really well with serious dramatic character roles, but he doesn’t scream “charisma” when he’s on screen. At least, not in terms of leading a fantasy-adventure franchise like Fantastic Beasts. I hope he proves me wrong, but it’s a slight concern for me. Perhaps it’s just the marketing, but in the full-length trailers I’ve seen, he feels somewhat distant and disengaging. Again, maybe it’s just the trailer. Additionally to that, the casting of Johnny Depp has me dubious. Depp’s antics could serve well in this kind of setting, and outside of Tim Burton he has proven himself to be a good actor, but it could also be a major backfire. I just hope he’s not a huge distraction.

Outside of those two, the rest of the cast looks descent. Colin Farrell, Jon Voight, Ron Perlman and Ezra Miller are always great and I’m glad to see them here. But more than anyone else, I’m stoked to see Katherine Waterston in this film. I’ve been dying to see more of her since Inherent Vice, where she blew me away. I’m not sure what kind of role she will have but I hope it’s more than just a few scenes here and there.

I think going into Fantastic Beasts, the key will be expectation. I’m not anticipating this film to live up to the greatness of Harry Potter. It’s probably not even fair to compare this film to Harry Potter, even though it will be impossible to refrain from that exercise. Keep in mind, the first two Harry Potter movies were lesser than its latter counterparts. So even if this first film is average, that can be an okay thing. I expect better from Yates at the helm, but given this is Rowling’s first go-round as a Hollywood screenwriter, it’s okay if this is just a “B” film. Either way, I’m ready to dive back into a world that I absolutely adore.