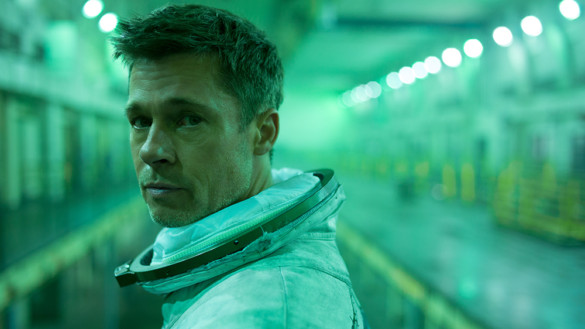 On the surface, James Gray’s Ad Astra appears to be just another spectacle driven science fiction flick which failed to set the Box Office alight. The film had a budget of a budget of $100 million and needed to earn over $150 million at the Box Office to be considered an investment. The film ended up making $127 million for 20th Century Fox and as a result the film quickly disappeared from theatres. Bearing this in mind, one might be led to believe that Ad Astra was a failure. It’s worth seeking out Ad Astra, not because it happens to be a film set in space with well choreographed action sequences and a strong performance from Brad Pitt, but because this is a film which addresses the importance of therapy and learning to let go of one’s past.

Like how Jaws isn’t really just a film about a giant shark or The Shining isn’t really about a haunted hotel, Ad Astra isn’t really about space. Yes, it may take place in space but the film could have taken place on Earth and at any time. It’s core message, themes and ideology are timeless. Like Homer’s The Odyssey which makes up the building blocks of all ‘adventure’ stories, Ad Astra is about man’s self-discovery and finding a path back to what really matters. It is also a film with a lesson: learn from the mistakes of the past. From the deepest parts of space our past threatens to kill us, a past that we once believed was glorious and faultless. Ad Astra is a fairytale for the next generations out there who are faced with unstable economy, political unrest and climate change. We can overcome the seemingly impossible.

Ad Astra follows the character of Roy (played by Pitt) who is sent on a mission in space in search of his lost father (Tommy Lee Jones), whose experiment threatens the Solar System. Roy has spent his entire life living in the shadow of his ‘hero’ father and through the course of the film he comes to learn that hat his father has actually committed a hideous crime. One could read Roy’s journey as  one going through the process of therapy: revisiting the past, confronting our pain and finding solace.

For a great portion of the film, Roy is isolated and cut off from others both metaphorically and figuratively speaking. We may not be traveling in space like Roy, but a feeling of vast isolation is something that many of us coping with depression and grief often feel. As Richard Newby writes, “Isolation, like pain, is an idea that we’ve been conditioned to believe is necessary for grand success.” Roy sets out on his journey alone, but when he sees how his father has shunned human contact for a life of isolation, Roy realises that there’s more to life than work. As Newby states, Roy’s “father is the future version of himself should he continue to sacrifice his feelings for the work and allow the sins of the father to become the sins of the son.” We mustn’t be consumed by the past, but grow and learn from it, if we are ever to escape its gravitational pull.

The character of Roy is a complex study of hyper masculinity at its worst, this warped idea that a  man is only a real man when he is alone. As David Ehrlich states “Roy McBride is the platonic ideal of contemporary masculinity — a sexy and self-sufficient space cowboy who’s tortured by daddy issues so extreme that he’d sooner die than have to deal with them.” Like Pitt’s Cliff Booth from Once Upon a Time in Hollywood, on the surface Roy looks effortlessly cool, but this coolness comes at an ultimate cost.

Throughout the film, Roy is praised for his ability to control his emotions as well as the fact that his pulse always remains steady even in the face of danger. Roy doesn’t even seem to react to his wife Eve (Liv Tyler) leaving him or the news that his father is potentially still alive. To feel anything would lead to pain and rage consuming him just like his father was consumed by rage.

Roy lives in this constant fear that he will never be good enough, not for his father nor for society’s high expectations of him. Roy confrontation with his father allows Roy to overcome his fear. He is good enough. His father pleads with him to let him go, and Roy does so. He unburdens himself from his past, and instead of giving up to the darkness of the space that surrounds him, Roy sees a way out. Gray offers us comfort in knowing that we have the potential to let go, and find ourselves back to the light.

What is remarkable about Ad Astra is that Gray set out to re-establishing what it means to be a hero. As Gray discussed in an interview, “We don’t quite understand what the word ‘hero’ means, anymore. We associate it with invincible superheroes who have unlimited magical powers — nothing bad can ever happen to them.” A hero in Gray’s eyes is someone who accepts their flaws, confronts their fear and decides to carry on with their journey even if it may seem easier to allow the vast emptiness of space to consume them.

Ultimately, we can all be like Roy. We can address the past, confront our fears, learn to let go and find our way back from the edge. Sometimes we venture into space not to find the secrets of the universe, but rather find our inner strength. Simply put, Ad Astra is more than just another space movie.

Hear our podcast review on Episode 344: