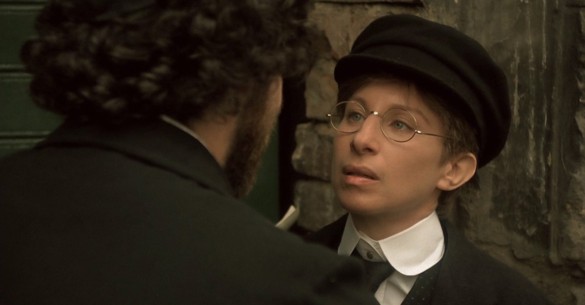 If any genre of film is an acquired taste, it is the musical. Musicals have a lot of specific expectations that can rub the general audience the wrong way. If you are a fan of musicals and have had to hear from people who are not, you will recognize the complaints. “It just doesn’t make sense!” “Who sings and dances their way through their life?!” This month, we are taking a look at a musical that may be slightly more palatable to the uninitiated. Yentl (1983), along with The Prince of Tides and The Mirror Has Two Faces, all directed by Barbra Streisand, is leaving the service at the end of the month, and honestly, that is a tremendous triple feature.

As a fan of musicals, upon sitting down to watch a movie starring Streisand and Mandy Patinkin, I immediately assumed I would love it. I was right, but not in the way I first thought. To ruin the surprise here, Mandy Patinkin, an accomplished musical theatre actor (as well as screen) does not sing in this movie. Because of my expectations, I kept waiting for his musical moment, and it never comes. This is not an indictment of the film, just a note. However, the musicality of the film is handled brilliantly, especially when you consider how measured the choices are for a directorial debut from Streisand.

The both great and terrible thing about songs in musicals is that they can be a shortcut to pure, intense emotion. When handled poorly, this emotion can ring hollow or feel forced. But when it works, there is nothing better. Streisand chooses to handle this by limiting the musical number to moments of introspection. Without fail, whenever Yentl/Anshel is overcome by emotion, whether it be grief, anxiety, or love, she retreats into herself and we are treated to the incomparable voice of Barbra Streisand.

Given that this is a gender-bending story, it should come as no surprise that Yentl’s relationship with important men in her life are at the forefront of the film. At the outset, the one relationship we are aware of is between Yentl and her father, Rebbe Mendel (Nehemiah Persoff). Although these interactions are quite literally short-lived, the script, penned by Streisand and Jack Rosenthal, allows us to see a multi-faceted relationship form. Her father’s concurrent worry for her future and pride in her knowledge and abilities come through via good natured humor, paired with fatherly frustrations.

After his death, Yentl’s male affections turn to Avigdor (Patinkin) after chopping off her hair and posing as a man in order to study the Torah, her original love. It is important to note that there are certainly striking similarities between Yentl’s father and Avigdor. Despite his explosion late in the film, both Avigdor and her father are remarkably gentle, even through their frustrations. Her father realizes that she is strong-willed and not prepared for the life of a woman at this time (a wife and a mother), but he is also aware that after the death of her mother, he was not able to teach and guide her in this way, only in the ways of knowledge. Avigdor, on the other hand, is not consciously aware of her identity. However, he does seem to notice literally everything else. This all comes to a head when she shows herself to him. Before this moment, there are times when he lets his excitement get the best of him, including epistemological discussions and skinny dipping, of all things. At first, he tries to drag her into the lake but eventually realizes that her protestations are real and panicked. When he has this knowledge, he stops and simply says “I won’t force you.” This is a simple moment, and also the moment in which she is falling for him against her own wishes. This gentleness, echoing her other important male relationship, has a tremendous impact on Yentl as she makes the questionable choice to marry Avigdor’s love so they can hopefully be together.

Avigdor is more than a love interest for Yentl, he is a test, a discovery, a symbol of what is missing. As we get to know Yentl, it becomes crystal clear that although she has a great deal of knowledge, in many ways she has used this learning as a shield against living life. When she joins his yeshiva, the rabbi both asks and answers questions. The meaning of this scene, when combined with her growing affections towards Avigdor could not be more obvious. Yes, knowledge and wisdom are important to our lives. But they are nothing if we do not truly live our lives. And love is a huge part of that life. If we constantly protect ourselves from the pain and loss inherent in romance, all of that wisdom and knowledge is all for naught.

The explosion from Avigdor, although coming late in the film, is really where Yentl’s story hinges. She finally tells him the truth and exposes herself to prove her femaleness to him and he is, understandably, confused, and upset. But as he shakes her physically and the gentleness seems to disappear, And just as it gets to an intensity that seems unsafe, she professes her love and he falters into her. And here is where the movie could go in two different directions. It would be easy to have Yentl and Avigdor run away together, it is what we expect out of a romance. But this work chooses reality and finds an even more uplifting ending. Avigdor ends up with the woman that he swears that he loves and Yentl is given the opportunity to have both of her passions. Should she stay with him, she would have to study in secret, much as she did with her father. The film instead, gives her freedom in a new place to both study and truly live.

Yentl would be an impressive achievement at any point in a director’s career. The fact that this was Streisand’s debut makes it even more notable. Yentl’s example of gentle, yet strong masculinity feels decades ahead of its time, and having a woman behind the camera (even more a rarity then than now) is partially responsible for this. Despite being a musical directed by and starring a celebrity of the highest order, Yentl is an exercise in subtlety and restraint rarely seen in popular films.