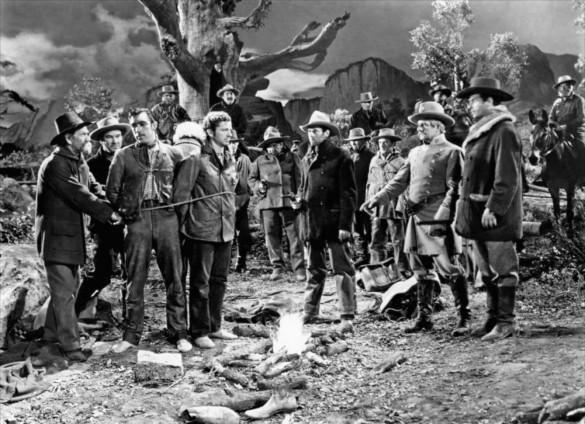 Much (probably too much) has been made of the runtimes of movies. And god knows, if you want lengthy movies, The Criterion Channel is a great place to find them, in any and every language. But, if you watch a lot of movies (and I’m assuming you do if you’re reading this column), there is something both charming and impressive about a good movie with a low level of time commitment. Great movies are great movies, regardless of length, but I have to admit, if I’m picking between a 90 minute masterpiece and a 3 hour epic, the 90 minutes is very tempting. And this comes from someone whose favorite movie is Lawrence of Arabia. But this edition of the column is not about traversing the desert with Peter O’Toole. Instead, we focus on a western that clocks in at a swift 75 minutes.

The Ox-Bow Incident, starring Henry Fonda as the rough but relatable Gil Carter is a film that is not talked about nearly enough. It has all the pedigree you would want; big stars, a simple but fantastic script, beautifully photographed, and an important message.. Heck, it was even nominated for Best Picture at the Academy Awards. Like everything else, it was bowled over by Casablanca, but probably deserved better treatment. Speaking of its efficiency, within the first ten minutes, our protagonists are introduced and the inciting event is introduced. News has arrived that a local man has been killed in cold blood and his cattle have been stolen. This quickly leads to a posse being formed to exact justice.

In what could be a quick, throwaway scene, screenwriter Lamar Trotti focuses in on Gil speaking with the town’s judge (Matt Briggs) about the danger of mob justice. This brings the audience to Gil’s side, despite his gruff exterior. This will be a repeated theme throughout the film. Gil is kind to others, even those that are treated as second class citizens, such as Sparks (Leigh Whipper, sadly uncredited) an older Black man brought in on the posse to jokingly provide a religious presence to the proceedings. Later in the film, Gil is the only one who stands up physically against poor decisions being made.

As one might expect, action picks up quickly in The Ox-Bow Incident, as the posse very quickly catches up to the supposed criminals. Director WIlliam A. Wellman accomplishes the passage of time and distance via beautifully composed shots of the men (and one woman) on horseback over rapidly changing vistas. When they reach the accused trio, the film changes from a straightforward western to a mockery of a trial. But none of this sets it apart. Movies have been made in these styles before. What separates it is actually the complete lack of a mystery.

Even to the simplest of viewers, there is never a doubt that these three, Donald Martin (Dana Andrews), Juan Martinez (Anthony Quinn), and Alva Hardwicke (Francis Ford), are completely innocent of the theft and murder of which they are accused. The performances of these three men make the film, even more than the filming environment or the star turn from Fonda. Donald Martin is well spoken and clearly the focus of the interrogation. Juan Martinez is mostly non verbal until more truths are revealed. Alva Hardwicke remains mostly quiet and fearful, as if he knows exactly how this will all turn out. This combination of character work provides both a rooting interest and lack of assurance that is necessary for tension to continue to build.

Of the three, Anthony Quinn is probably the most recognizable face, and he portrays both of his characters very well, a mix of supreme bravado and a dangerous edge. But the heart of the film is clearly Dana Andrews. His honesty, naivete, anger, and abject terror all ring equally true at the appropriate moments. The performance would be impressive in any film, but to harp on the runtime, Andrews appears in the film for approximately 35 minutes. Despite this relatively brief appearance, he crafts a character that is intensely empathetic and runs the gamut of human emotion. Andrews’ gentleness, contrasted with Fonda, is a stroke of genius. For most of this mob court, Fonda listens and examines the story. Of course, being a western, Fonda does speak in quick bursts of anger from time to time, but he cedes most of the spotlight to others. But in a true representation of his stardom, we never forget his presence.

As expected, there are no happy endings in The Ox-Bow Incident. Despite protestations from a few of the posse, all three men are killed by hanging. This occurs after a heartfelt letter written (and then read out loud by others) by Donald Martin as a goodbye to his wife, an attempted escape by Juan Martinez, and Gil failing to halt the execution by physical means. It becomes apparent that, in this situation, nothing will help. All of these deaths were foregone conclusions. There is only minor solace in the shaming of the men who did not stand up as the credits roll.

The Ox-Bow Incident stands firmly alongside the great stories about the dangers of mob mentality. It easily connects to stories like “The Monsters Are Due On Maple Street”, To Kill A Mockingbird, M, and The Lord of the Flies. Much like these works of art, The Ox-Bow Incident will leave audiences haunted by the choices made and the helplessness we all feel in the face of passionate resolve flying in the face of all logic, care, and empathy.