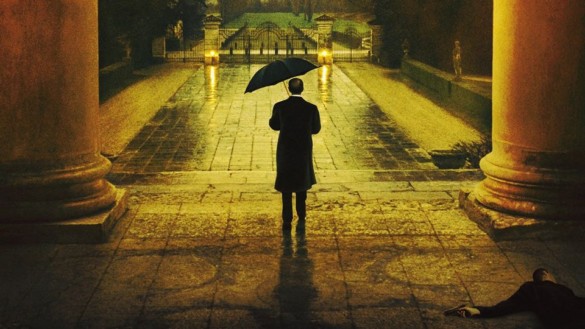 One of the many joys of limiting your choices to movies leaving a streaming service, like the Criterion Channel, is that the quality of a movie, as in thumbs up or thumbs down, or a ridiculous star rating starts to matter less and less. Even if a movie is not “great” or “awards worthy,” it can still have something interesting to say. Every year, there are many examples of this, maybe a film is messy or slight, but something about it sticks with you, nonetheless. This is also the risk I tend to run with this column, as I tend to avoid movies I have already seen.  Where would be the fun in discussing a movie that I already know my opinion about? And this brings us to our latest blind watch, Ripley’s Game from director Liliana Cavani.

Ripley’s Game, based on the book of the same name by Patricia Highsmith, is a bit of an oddity considering it is the third book in the series about Tom Ripley, most famously portrayed by Matt Damon in The Talented Mr. Ripley. Despite the fact that this is based on a series, Ripley’s Game throws us into the world of Tom without much context. In short, Ripley is introduced in an art forgery scheme, along with co-conspirator Reeves (Ray Winstone), and this work alliance later comes back to cause a great deal of trouble for him. But frankly, the plot machinations are the least interesting thing explored in the film.

What is interesting is the journey of Ripley (John Malkovich)  in comparison to his two foils. Ripley, although prone to extreme violence when necessary, is mostly cold. Even when with his wife Luisa (Chiara Caselli), there is something rehearsed about his affections. This calculated distance is in direct opposition to his relationship with two men, Reeves and Jonathan (Dougray Scott). It would be easy to discount Malkovich’s performance as standard and expected for an international criminal, but I think this is the point. This personality is just as rehearsed as the rest of him is, a perfect amalgamation of characteristics that may help him succeed.

Reeves is obviously different from Ripley. He is uncouth, brash, and happy to use violence, especially when it is not necessary. Ripley realizes this about him and after their initial connection, he attempts to force even more distance than usual. He even gives up a lucrative amount of money so he can retain the power to stop Reeves from being any part of his life. He offers this money as “a gift from the Ripley finishing school, because we are finished.” It is a clever line, delivered expertly by Malkovich, which tells us everything we need to know about this relationship. When Reeves appears in his life years later, the tension is palpable. But interestingly, instead of refusing Reeves outright, he stylishly placates him. Reeves wants to hire someone to assassinate a rival, but needs an unknown. And this leads us directly to Jonathan.

Jonathan is introduced to the audience in an awkward moment in which he is caught speaking poorly about Ripley as a man with too much money and not enough taste and class. Malkovich, who has proven time and again that, despite not being physically intimidating, can fill a moment and incite fear. Because of this introduction and revealing that Jonathan is dying of leukemia, Ripley tells Reeves to approach him for the job. The money he would be paid would allow him to help take care of his wife, Sarah (a sadly wasted Lena Headey) and their child. Jonathan is also wildly different from Ripley, but in a very different way. He is frightened, flustered, and unsure of his every move. Slowly, this changes Ripley. There are moments of tenderness between the two in which you see Ripley’s confusion at his own actions.

Despite the fact that the beginning of this relationship is wildly uncomfortable, Ripley finds himself helping Jonathan. Some of this is due to building a friendship with Sarah, but it also empathy slowly seeping into a character that could be described as sociopathic through most of the runtime. As the climax of the film occurs, focusing on Ripley and Jonathan holed up in Tom’s beautiful home as villains attempt to break through and kill them both, there is an ease, an almost joking cadence between the two men. In these moments, both of them clearly care for one another and protect each other. This feeling comes to a head later when, in quick succession, Ripley saves Jonathan and Sara, Jonathan takes a bullet for Ripley, and Ripley has a moment of intimacy over a great distance. As Jonathan bleeds out, Ripley is truly confused, asking him why he would do this. But the realization of this friendship washes over Malkovich’s face just as it becomes too late. And in the final scene, Ripley watches his wife perform at a concert from the back row. But this is the first moment that does not feel rehearsed. He smiles over that distance, perhaps finally akin to how Jonathan looked at Sara earlier in the film. Ripley is finally truly feeling and connected in a way that we did not think was possible.

So, is Ripley’s Game a perfect, or even very good movie? Absolutely not. As a matter of fact, it is mostly mediocre fare. There are wasted quality actors, drifting plotting, and less than impressive directorial choices. But any movie with Malkovich in a lead role is not likely to be completely forgettable. His fleeting moments of connection and wry sense of humor make Ripley’s Game worthy of a watch as it leaves The Criterion Channel.

Join us later this month when we take a look at the great Paul Thomas Anderson and Hard Eight!