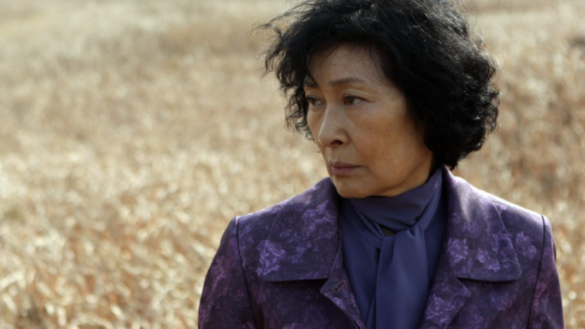 So, this month on Criterion Crunch Time, we have talked a lot about the trappings of genre and how great directors weave in and out of them. Well, we are not quite done yet. Instead of using one genre to play with expectations like Haneke’s Caché, this week we take a look at another director who combines genre in order to keep us all on our toes. In order to do that, we turn to cinephile’s latest favorite son, Bong Joon-Ho. And no, it is not Parasite, although that is a tremendous film that you can (and arguably should) own on The Criterion Collection. But two of his earlier films are, sadly, leaving the channel at the end of the month. This left us with the choice between Barking Dogs Never Bite and Mother. Being the more known of the two, and having a reputation for being a movie you have to see to believe, Mother is our movie of choice to end 2020.

Ok, so back to the genre. Is Mother a comedy? Is it a crime story? Is it the tale of a mother’s love? The answer, of course, is yes. To all of them. Yet, the way director Bong chooses to thread these stories and the order in which he does so is full of purposeful choices, each one more complex than the last. The film opens with Mother (Kim Hye-Ja) dancing serenely in a beautiful outdoor setting, managing to fool the viewer into a serene mood. It is also striking to see a film from a well-known director that focuses on an older woman, something sorely lacking in American filmmaking.

But quickly, Mother transfers to a more familiar scene set on a city street. In it, Mother’s son, Yoon Do-joon (Won Bin), in a delightfully dense performance, is almost hit by a speeding car. Despite the fact that the narrative begins to follow him, it is notable that this is funneled into how it impacts Mother. The perspective is hers as she injures her finger in her haste to check on him. Yoon Do-joon and his friend of debatable morality, Jin-Tae (Jin Goo) chase down the people in the car, eventually ending at a posh golf course. Although mildly violent, all of this chase and subsequent arrest is framed comedically.

Despite that comedy, it ends with Mother arriving at the police station to save her son. Her son, who clearly has an intellectual disability and difficulties with memory, appears perfectly harmless. Because of this, he is taken advantage of by Jin-Tae repeatedly, even blaming him for damage to a vehicle after mocking him for not being able to manage it in the first place. Again, this is focused on the comedy, but is drastically important when the story darkens, to put it mildly. Despite the fact that we see him watching and following a girl, Moon Ah-Jung (Moon Hee-Ra), late at night, it is unlikely that we see him as a likely suspect when she is found brutally murdered the next morning.

And this is when Mother switches into another gear. Very quickly, Yoon Do-joon stupidly signs a confession and the focus returns to Mother. Within the space of maybe 30 minutes, she goes on a journey which reveals both revelations about her past as a mother and the lengths that she will go to in order to protect her son, once again. But importantly, these steps do not require giant leaps of logic. In the hands of a less talented director and writer (Bong Joon-Ho co-wrote the screenplay with Park Eun-kyo), her actions would seem out of control and out of the realm of any sort of reality. But as we journey with her through her son’s night via her investigations and his limited memory, things definitely make sense, right up until the point when she goes past the edge.

Everything leading up to that moment feels honorable and good. Simply a mother fighting for both her beloved son and the truth. She knows he could not have done this terrible thing, so she must prove it, right? Well, what happens when the investigation proves his guilt? It is a masterfully created choice point for Mother built by Bong Joon-Ho. And neither choice is good. Mother must choose between defeat (and imprisonment of her son) and pure, unadulterated, vicious violence upon a man that does not deserve it. And even though this choice makes sense in the arc of both the script and character, it is shocking nonetheless. The camerawork (from cinematographer Hong Kyung-pyo) in that scene is memorable for the static choices. The camera zooms in on Mother’s face, not allowing us to look away from the end of this horrific journey.

Mother is equal parts funny, engaging, and disgusting. Bong Joon-Ho’s mastery of disparate genres enables this balance and should have told us all a decade before Parasite just how talented he is in terms of direction, writing, and frankly, as a storyteller. It would be so easy to just make Mother one of these things. It is difficult to make a comedy, a mystery, a true-crime thriller. Director Bong manages all of this without the audience realizing the long game he is playing. After all, what mother would not protect her son, especially one as innocent as Yoon Do-joon?

Join us next month for four more movies leaving The Criterion Channel in January!