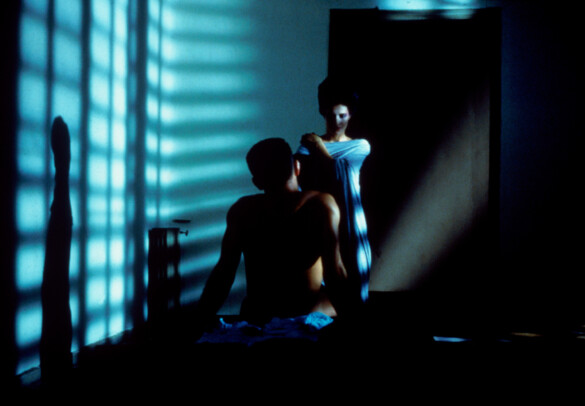 Well, we all have our favorites. The Criterion Channel (and this column is no different). In terms of the actual Collection, directors like Akira Kurosawa, Agnes Varda, Francois Truffaut, and Federico Fellini dominate in terms of numbers. This should be no surprise given our (as cinephiles) obsession with the auteur theory. Why wouldn’t you want to see the growth, decline, ebbs, and flows of a particular artist and their vision? Of course, film is an art form that requires collaboration, but that is a longer conversation than we have time for. Another director who Criterion loves (and has been covered in this particular column) is Pedro Almodóvar. With this in mind, we will take a look at 1986’s Matador.

Some of the best movies are romantic but disturbing. The film that most comes to mind when watching Matador is Phantom Thread. Now, this could be because I am always wanting to think about the movie. But also, at its core, Phantom Thread is about two wildly damaged people finding love with one another. At the end, you are almost glad they are together, if simply for the fact that they are no longer inflicting their particular brand of damage on anyone else. Despite the beginnings of Matador being focused on Almodóvar’s young star (Antonio Banderas), it is really the story of Diego Montes (Nacho Martínez), a retired bullfighter, eventually connecting with a lawyer, María Cardenal (Assumpta Serna). It should be noted that, oddly, there is a subplot involving Diego’s student, Angel (Banderas) having true visions, that is only used as pure plot device. This is strange, but Matador is good, trashy fun, so it’s somehow easy to accept.

But the core of Matador goes beyond romance. This is Freudian. Eros and Thanatos. Sex and death, pure obsession. The first half hour takes some time to unfold, making us think this might be a police procedural, given that Angel rapes his neighbor Eva (Eva Cabo), who is also dating Diego. But this is all a ruse, to introduce Cardenal, as his lawyer, and link her quickly to Diego. But back to the sex and death. The film literally opens with a woman murdering a man, during penetration, with a hairpin to the base of the neck. As a note, this is also how young bullfighters are taught to dispatch a bull. Later, when Diego is shown having sex with Eva, it is disturbing and unexpected. In an act that has clearly been practiced, she lies prone, unmoving, as if dead. This is never played from Eva’s perspective as upsetting, though neither is the attempted rape from Angel, so the sexual politics are certainly to be questioned.

Obviously, most of the perversion and focus on sexualized death is focused on Cardenal and Diego. It becomes clear that, before they officially met, she was witness to an important moment in his life. In the ring, he was gored by a bull. He not only relives this by watching the video but is shown masturbating to slasher films, which are eerily similar in type of injury. This moment is not only important to him, however. As he reviews the tape and recognizes her, there is a look on her face that is difficult to describe. She is filled with both horror and arousal, a look we recognize because earlier in Matador she has been involved in sexual and sexualized situations. In nearly all ways, Cardenal holds complete control. As a matter of fact, it is revealed that she has orchestrated much of the plot in order to find him and be close to him. She flat out tells him that she has been near orgasm since she came into contact with him, but wants to extend this feeling. It becomes clear that, despite the sex and romance inherent, they will not survive the moment, they cannot. Not when desire and death and power have become this intertwined.

As the story literally races to its conclusion, with the help of Angel’s telepathic powers (it feels silly even writing that), we are not so much rooting for the devious pair to be caught, or even for them to run off together. There can only be one ending for Diego and María. Despite the frank discussions of orgasm, there will be no little death for this duo. In a scene that only Almodóvar could film, María rides Diego to completion, all with the barrel of a gun in her mouth, a not so subtle symbol of masculinity, power, sexuality, and death. The final shot, with their two bodies artfully entwined in death, does not leave us feeling strong negative emotions, such as sadness or anger. Instead, like most of Almodóvar’s choices, it feels exactly right.

Matador is just one more example of a filmmaker throwing caution to the wind and telling the exact story they wish to. Almodóvar has never been one to pull punches, but there is some shock value here, even for him. I honestly cannot imagine seeing Matador without knowing who Almodóvar is, what a stark, terrifying experience that must have been. This, and many other films, make the Criterion Channel a delight for film fans. There are so many options out there, and having so many films entering and leaving a service provide an amazing opportunity to experience something wholly new, even more than 25 years later.