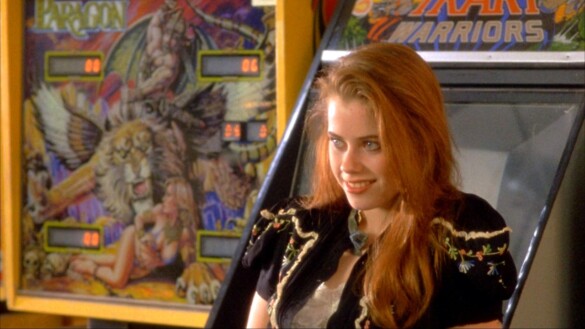 Sometimes, Hollywood’s history of, and practice of, continued misogyny really makes me wonder how different things could be on a film level with that removed. This is, of course, a complex issue and not one that can be simply removed. But I find myself thinking of actor director combinations that stuck throughout director’s careers. Male directors tend to find their muses and build fabulous combined careers together. Scorsese and De Niro (or DiCaprio), Tarantino and Tim Roth (or DiCaprio, again), and Paul Thomas Anderson and Phillip Seymour Hoffman immediately spring to mind. It gets harder when trying to think of female directors.  Possibilities include Greta Gerwig and Saoirse Ronan or Sofia Coppola and Kirsten Dunst. Today, I want to look at a combination that I wish had created more movies together, Allison Anders and Fairuza Balk. To accomplish this, the Criterion Channel has supplied us with a movie leaving its service, Gas Food Lodging.

Allison Anders, for a time, was a bit of an indie film darling. Possibly the high point of this (in terms of public knowledge) was her being involved with Four Rooms, alongside Quentin Tarantino, Robert Rodriguez, and Alexandre Rockwell. Fairuza Balk, on the other hand, is highly thought of in certain circles for horror and horror adjacent work, such as Return To Oz and The Craft. Because of these roles, her performance in Gas Food Lodging is a revelation. Whatever you may be expecting from her, I can almost guarantee you that you will not see it here.

Gas Food Lodging, in brief, is a coming of age story about two daughters being raised by a hard working single mother in a trailer in New Mexico. Of note, Anders was a production assistant on Wim Wenders’ Paris, Texas, and you can absolutely see her beginnings shine through. The focus on small town vistas would remind you of Wenders’ work, even without that knowledge. The two daughters could not be any different stylistically. The older sibling, Trudi (Ione Skye) is willful, sexually active, and volatile in every sense. However, Shade (Balk) keeps to herself, spends time alone in movie theaters, and focuses on her mother’s love life more than her own. Speaking of her mother, Nora (Brooke Adams) provides a much needed different type of single mother on film. She is neither a perfect paragon of hard work, nor a complete mess. Nora is a mix of both and one cannot help but relate to her, even when she is screaming at Trudi.

Gas Food Lodging also has some interesting things to say about relationships in general, and men in specific. It feels like, for most of the runtime, the only good men are on the silver screen, and not in real life. The film basically opens (after some voiceover from Balk) with a horrific interchange for Trudi featuring implied oral sex, lies, and finally, rejection. And things are no better for Nora, who seems doomed to only get attention from her ex-husband and a married man with whom she has a sexual past. And Shade? Her options seem limited to an obviously gay (to everyone but her) best friend, Darius (Donovan Leitch) and an employee at the local theater, Javier (Jacob Vargas) who is full of animosity after being called a slur by Trudi. The only possible reprieve is in Trudi’s new boyfriend, Dank (Robert Knepper), but his trustworthiness is varied throughout the runtime.

But truly, this movie sinks or swims based purely on Fairuza Balk’s performance. Depending on the scene, she is bright, dark, cold, excited, loving, and angry. It is truly a masterful performance that keeps you on the edge of your seat. And yet, there is not a single acting note out of place. She is able to, both through her wonderful performance and her absolute mastery of Allison Anders’ screenplay (based on the book, “Don’t Look and It Won’t Hurt” written by Richard Peck), make us understand her exact place and emotion, regardless of whether or not we have ever actually experienced the moment. In particular, her attempted seduction of Darius is both hilarious and painful. The awkwardness of Balk’s gait in unfamiliar heels (dressed as Olivia Newton-John) tells us everything we need to know about how this moment will progress. But it alters as she breaks down into tears and leaves in a mild rage. In a beautifully written and performed transition, she is surprised by Javier and quickly made aware that he cares for her, without the hiding behind a wig and uncomfortable shoes. It is a truly lovely moment that does not need a continued relationship to make it worthy.

Watching movies from the past can be enlightening and depressing in the same moment. Both Anders and Balk have had limited careers in film, and I cannot, for the life of me, see a good reason why they could not have been a lasting pair. Thankfully, services like The Criterion channel offer a view into what could have been. You should absolutely watch Gas Food Lodging and especially the performance of Fairuza Balk before it leaves the service.