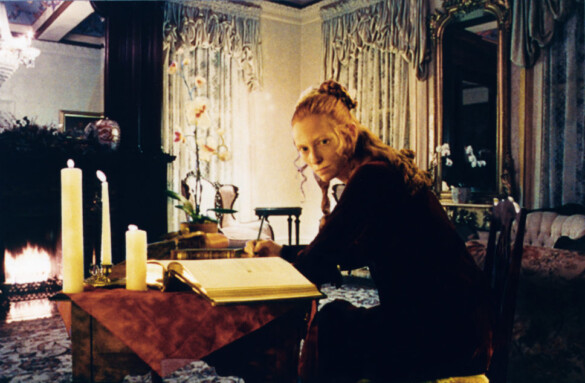 When you pick movies nearly at random that are leaving the Criterion Channel, your life as a writer is never boring. When I began this column, one of my goals was to watch more films by women, which was why I picked the film I did this time around. This particular film also has the selling point of Tilda Swinton, one of our most interesting and enigmatic screen presences in some time. That being said, sometimes these movies are much harder to write about. If I’m being perfectly honest, this may be the first time in which I honestly do not know where a piece is headed. And with that, I give you Conceiving Ada, a film you’ve probably never heard of before this very moment.

Conceiving Ada, directed by experimental filmmaker Lynn Hershman-Leeson, is a whole lot of things in an 82-minute package. But generally, it focused on a computer scientist, Emmy Coer (Francesca Faridany), who is obsessed with Countess Ada Lovelace (Swinton). Lovelace is the author of the first computer algorithm, but much about the creation of this, and her life, is shrouded in mystery in theoretical thought. Through a series of events – an unexpected pregnancy, an ability to communicate with Lovelace, and discussions with her mentor, Simi (Timothy Leary, of all people) – Lovelace’s consciousness is implanted in a young girl in order to live a life that will be remembered. This is, of course, the broad strokes of a plot in a movie where plot is inherently less important than ideas.

Among other thematic areas, it is particularly effective and meditative regarding feminism and the “place” of women throughout time. As a film, it can appear preachy, which is why Swinton is so important to the message of the film. Conceiving Ada is clearly an experiment in technology and feminism, but likely will not be remembered for it visual flair. For this reason, the first half of the film may be a difficult sit for many viewers. It is a necessary build, but with the focus on relationship drama between Emmy and Nicholas (J.D. Wolfe), Swinton is literally a still image just waiting to twitch to life. However, Emmy’s argument with Nicholas regarding the unwanted pregnancy has a confusing impact, as it should. It is Emmy’s body, but she is connected to Nicholas and they eventually make the decision to keep the child, an important plot moment even if we do not realize it immediately. That being said, once Emmy creates a way (that I still don’t actually understand) to communicate directly to Ada, the film opens up.

The camera, and Hershman-Leeson, clearly love Swinton (as proved by her repeated casting in her three narrative films). When we are finally able to engage with Lovelace’s past and her future, Hershman-Leeson’s ideas come to a kind of fruition. Lovelace is clearly a once in a generation talent mathematically, and actual genius. And yet, she is limited in her world, purely by her gender. Even the men who believe in her and support her, treat her like an anomaly, a creature in captivity. But here is the trick, because of the direction and Swinton’s pitch perfect performance, we do not pity her. Instead, we are filled with rage at the inequity she faces on a daily basis. Nothing hammers this point home quite like the heartbreaking near ending in which Emmy essentially offers to trade her unfinished “half” life for Ada’s.

Ada replies that a half life is no life for her, which is particularly poignant as it is reminiscent of the limitations that she struggled against and suffered under for her entire life. She is a woman who was not fulfilled by what is expected of women, especially in that time. She had two children “come from her” but this was never what she wanted as a result, she was not meant to be remembered for motherhood, but for massive change. The decision to place Ava’s mind in the shell of her unborn daughter is one that is more shocking the more you think about it. Yes, Ada is gaining more than a half life by taking over from birth. But I think it is more than that. This could be the director’s view on where life begins. Surely, Hershman-Leeson would not have Ada Lovelace take over the body of a human woman who existed. That would be tantamount to reenacting what men did to her to an innocent woman. However, if life begins at birth, then Ada is committing no such crime.

For not the first time, I am grateful that this column does not force me to give letter or number grades on the films that I watch. The fact that we are seeing these movies mostly blind, leads us to see films that are, at a minimum, outside of the mainstream. Conceiving Ada may be one of the most difficult to access movies we have seen here, but I still mainly found it rewarding. Would I ever have watched this without the combination of The Criterion Channel and the name of Tilda Swinton? Absolutely not. But I am still glad I did, and I find myself even more grateful for this experimental film given our current barren cultural landscape.