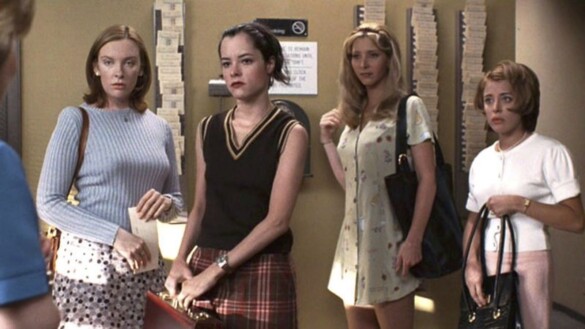 When you spend your time watching a lot of movies (like I’m sure you do), you learn to appreciate the unexpected, regardless of film quality. As I scour the films leaving the Criterion Channel every month, the real glory is finding something new. This month, I found exactly that, but in an unexpected way. As most of you know, if possible, I try to find works by non-male directors to engage my own viewing in a more broad way. So, when I did minor research on Clockwatchers, I was expecting a “female version of Office Space, and boy, did I not get that!

In Clockwatchers, directed by the criminally under hired Jill Sprecher, we see the story of female temporary workers in the office setting. And yes, the comparisons between this and Office Space would be very simple, but she is telling a drastically different story here. I certainly did not expect a hidden treatise on class and gender in this hidden package. It just goes to show you that one should never make judgments, even when it is tempting, before sitting down and experiencing the movie.

Clockwatchers follows Iris (Toni Collette) as a painfully shy temporary worker. So shy in fact, that, in a nearly perfect opening scene, she sits for more than an hour rather than make herself known to begin her workday. The director, along with her sister, Karen Sprecher, make several smart decisions regarding their protagonist. One of the challenges of such a reserved character is that it can be hard for the audience to relate. To combat this, they use, however sparingly, voiceover narration from Iris to allow us entry, not only into her thoughts but into the person she will become by the end of the film. Additionally, they slowly build her character, both through interactions with the other women, but with a reveal that shows us that she may have other options regarding her employment.

Despite what may be your expectations of small-budget independent film in the late 1990s, Sprecher also makes interesting choices in set design, dialogue, and shot selection (aided by cinematographer Jim Denault). The starkness of the office environment combines another unique challenge for the filmmaker. How do you make a film that is engaging to look at, while staying true to the soul-crushing blandness of temp work? Sprecher chooses to show this blandness not only through the camera but through the reactions of the women who work there. Of particular note is 90’s it girl, Parker Posey. Her characterization of Margaret is integral both to the plot and to the growth of Iris. She is a fairly obvious foil for the lead, practically being her exact opposite. The flair of both her costume design and her performance are nearly deafening when compared to Collette’s nearly mute performance in the first act.

But because of this relationship, and her relationship with the two other women, Paula (Lisa Kudrow) and Jane (Alanna Ubach), Iris expands internally and externally. She slowly becomes a woman who takes up space and has an opinion. Of course, this is mostly only true within this small group. Iris, along with all of the other temps, is limited in her scope. Clockwatchers, despite being a deadpan comedy, is shockingly focused on issues of both gender disparity and class. This hidden lesson begins when items begin to come up missing from the office. With this plot device, more permanent and powerful figures in the office begin to finally notice these women.

As their eyes, and accusations begin to shift towards the temporary workers, everything begins to change. Their desks, in another wonderful directorial decision, are moved front and center so all can see their movements. But because of their powerlessness, all four are terrified and cannot really fight this decision. Margaret complains but still remains at her desk and in this job. It is only when they leave the premises for the day that the explosion can occur. In a brilliant moment, while the other three walk with heads down, Posey practically screams that they are treated like “corporate orphans” and “call girls.” Although this is played to the hilt, Sprecher makes the loudest woman a soothsayer instead of a shrieking madwoman.  Looking back at how they are treated, you cannot argue against her point. They are ignored, forced to view random female nudity, chastised, and talked down to by other employees. In what world are they treated any better than orphans or call girls? In a perfect, even if unsurprising twist, the thief is a permanent employee who also refuses to speak to them. But at this point, it is too late as the group has already splintered.

Clockwatchers, given its expectations, is surprisingly bittersweet and heartfelt. It certainly helps that the cast, especially Collette, Kudrow, and Posey, is filled to the brim with unrealized talent. But it is not merely carried by nostalgic star power. Sprecher clearly has a wealth of experience in the mistreatment of the underpowered and delivers her message effectively, even within the story constraints of a workplace comedy. It truly is a shame that her filmography is limited to only three films. Clockwatchers is more than a 1990’s time capsule, it is worth watching as it defies those pesky expectations and becomes something powerful and thought provoking, a blatant attack on overwhelmingly white and male power structures.

The end of the year is here and I’m sure some of you have used the recent Barnes... Read More »