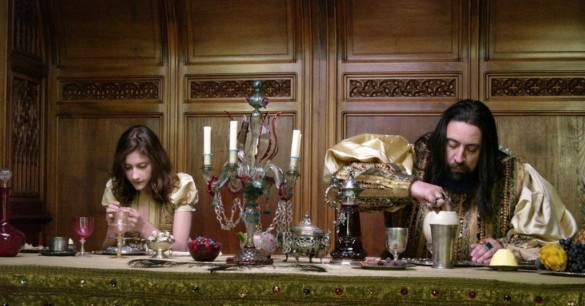 Here is one of the many glories of watching movies completely blind, especially those that are streaming on a service like The Criterion Channel. It is not that every movie you watch there will be a phenomenal, life changing, work of art.  I’m exhausted just thinking about that. No, it is that, and I dare you to prove me wrong, you will not find a film on this service that is wholly bad. You will always find something that the film does masterfully. And Bluebeard, directed by Catherine Breillat, is no different. Bluebeard is not a movie that I will likely revisit, but there is at least one thing therein that I will literally never forget.

Whether you like the film or not, and I am somewhere in the middle, Breillat makes truly interesting choices. The story of Bluebeard, told through sisters reading the actual story to each other is well done, but, in my opinion, wholly unnecessary. Those scenes, while wildly endearing, at least until the end, did not seem to serve much of an actual purpose, aside from extending the runtime to a respectable length. But, those scenes are certainly not the focus of the film, so they are mostly harmless.

For the uninitiated, the story of Bluebeard (and the story they tell of Bluebeard), is relatively straightforward. Two sisters have recently lost their father and are basically destitute. Luckily, a nearby lord, Bluebeard (Dominique Thomas) is looking for a wife and is wildly wealthy. The only catch is the rumors. Supposedly, no one can find his previous wives and everyone in the area believes that he killed them and hid the bodies. Kind of a buzzkill, but despite that, the two sisters attend his party. The older sister, Anne (Daphné Baiwir), is more stereotypically pretty, but clearly has no interest in marrying this man. On the other hand, the younger sister, Marie-Catherine (Lola Créton) is quieter and more introspective.

Bluebeard is a mountain of a man and describes himself as a monster and a beast. And yet, he does not wield his mass as a weapon. If anything, he seems meek, cowing to everyone’s needs. In quick course, he and the younger sister are married and she moves into his castle. And this is where Breillat’s brilliance as a director enters the equation. She does two things in equal measure. First, she never lets you forget just how large this man is, especially in comparison to this tiny, young girl. And sure, some of this is simple casting, but not the majority. She takes special care to allow the actor (and sometimes merely his head) to completely fill the frame. This is true whether he is kindly finding just the right space for her bed (and respecting her desire to wait to consummate their relationship) or when they are eating. Even his meals are larger. If they are eating eggs, hers are from a chicken and his are from an ostrich. These are all specific, pointed choices that Breillat makes. But, at the same time, Bluebeard is not a threatening force. He is kind and patient at just about every turn.

But when Bluebeard flips the switch from romance to horror, Breillat’s ability to maintain the scale of her lead characters makes all the difference. Bluebeard leaves the home on two occasions and Marie Catherine is left in charge of his many valuables.  The first time, she is given a set of keys and the freedom to do basically whatever she pleases. On the second trip, she is given the same keys, plus one more that she is not allowed to use. The temptation, of course, proves too strong and she enters the room, finding Bluebeard’s slaughtered wives hanging above a pool of blood. It is a truly horrific and slow scene that leaves you clenching, hoping she will leave no trace.

Sadly, Bluebeard is not that kind of movie and she leaves many clues that she was there. She admits as much to him when he returns, likely knowing it will cost her everything. And this is where that scale matters. Now, he towers over her, threatening. The film reminds you of the terrifying position that she is in, and that this was always a risk.

Bluebeard is a stark reminder of patriarchy and its weight, how it drags women down, even as they climb. Marie-Catherine was rich beyond her wildest dreams, a success in that limited world. And as she succeeded, she was given more responsibility from Bluebeard. But in the end, he sets her up. He shows her that you can only have so much, that he will truly be the one in control, no matter how gentle of a figure he purports himself to be. Marie Catherine is shown what she cannot achieve, like a glass ceiling, but much more personally dangerous. Nothing changes after she enters that room, except for her lack of obedience. A world of men simply cannot handle the idea of a woman they cannot control. In a subversive twist, what saves Marie Catherine? Technically, other men kill Bluebeard, but they arrive with the help of another woman, her sister Anne, absent for the majority of the narrative.

Bluebeard is yet more proof that even the most frightening, misogynistic tales can be improved with subversive feminism. Breillat takes the story of an evil man murdering unsuspecting young women and transforms it into violent men finally getting their comeuppance. But none of this makes a dent if Breillat does not foster both the sense of size differential, as well as the tenderness of the possibility of love. Luckily, she deftly balances both and keeps us on the edge of our seats.