Classic Film Review: ‘The Garden of the Finzi-Continis’ Was Too Muted For My Taste 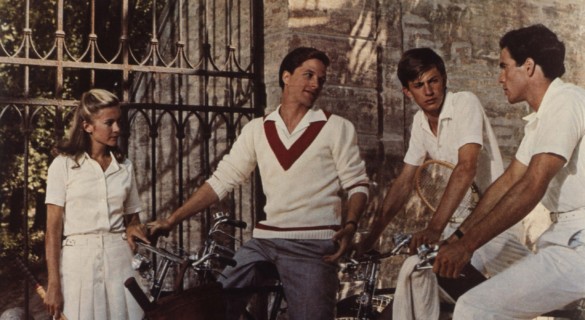 Has anybody ever met one of the blonde ice queens who seem to populate every film ever made by a sexually frustrated auteur? They seem to exist as figments of their imagination. They are beautiful in an ethereal, untouchable way and sport the same blank, unfriendly expression in every scene. Beyond their obvious beauty, it is hard to see why people are drawn to them. They have no apparent personality, are disgusted by the idea of sex, and can’t even begin to comprehend what being in love would feel like. Alfred Hitchock loved to humiliate and abuse the blondes who stood at the center of his films. Vittorio De Sica takes a different approach to handle this archetypal figure and tries to get us to empathize with a woman who makes nonsensical decisions. I think that he is let down by the fact that his approach to telling this story is terribly cold. There is a frostiness that hangs over everything and you wonder why you should care about the human story that he is trying to tell.

The film is set during the late 1930s and is about the impact of the Holocaust on several Jewish families in Ferrara, Italy. Giorgio, Lino Cappolichio, has been besotted with Micól, Dominique Sanda, from a young age. He simply hasn’t been able to work up the nerve to pursue her. This is because he knows that she is a member of the Finzi-Contini family and this means that she is in a different social class to him. The members of her family are extraordinarily wealthy and the other townsfolk envy them. To his surprise, he and Micól appear to be getting close, but she pulls away from him when he makes his intentions clear. He is heartbroken at the thought of not being with her and ignores the rise of Fascism in Italy, in order to focus on problems he faces in his personal life. The Nazis force Italian Jews to travel to Concentration Camps, where the vast majority of them die. The members of the Finzi-Contini family remain confident in the fact that this will not impact them in the same way that it does the other Jews in Ferrara. Others look on in horror as they remain ignorant to the fate that awaits them.

I understand that there is meant to be some irony in the fact that Giorgio’s agony seems so insignificant in comparison to the historical conflict occurring around him. He, and most of the other Jewish characters in the film, are so wrapped up in their own little worlds. The Finzi-Continis believe that they can insulate themselves from the rising tide of fascism by remaining behind the walls of their mansion. This has always worked for them and they have always existed in rarefied air because of their wealth. They don’t seem to comprehend that the Fascists are overturning the fragile social order that has been set up in their town and they will be wiped out along with the rest of the Jews. Giorgio thinks that his determination and youthful excitement will allow him to circumvent the rules that the government has set out for him. His freedom becomes more and more restricted as time goes on but this seems like a minor complication to him. He has his head in the clouds and Micól is the only person on his mind. We’re meant to stand by and be unsettled by the fact that these people couldn’t possibly anticipate the horrors that were to come. I know that the film does gesture at all of these ideas and it is certainly convinced of its own importance but it left me cold.

It is not so much that the characters are unsympathetic; it’s just that they’re uninteresting. They all feel as though they represent ideas rather than being flesh and blood humans with emotions that are driven by the politics of the parable that this story is meant to serve as. All of the actors play their characters like shallow sociopaths and yet their conflicts are played as though they are pure melodrama. There are love triangles, long running disputes between different overbearing patriarchs, and a scene where Giorgio throws himself at Micól in a moment of passion. All of this is handled with curiously muted emotion and everybody seems to be going through the motions instead of being emotionally engaged in what they are doing. De Sica’s camerawork also had an impersonal style as I was reminded of a clinical, objective Frederick Wiseman documentary when I watched dialogue scenes. You watch the characters through glass and more attention is paid to the lining on Micól’s tennis dress than what she is saying or what Sanda’s facial expressions are meant to convey. I think that this was the wrong approach to handling this material.

There are still sumptuous production values and the greenery and foliage serve as a feast for your eyes. The town does not feel like a character in itself but you still feel some sadness over the fact that such a serene, quiet place has been destroyed by outside forces. The peace that has been steadily maintained in this area, cannot remain forever and we look at the ancient buildings and shady lanes with wistfulness. These are all nice touches that you would expect from a master craftsman but one is encouraged to expect something more out of the man who made Bicycle Thieves (1949). There is still a chilliness that hangs over the town but maybe that was a part of De Sica’s vision. Perhaps I just don’t understand why he chose to make this an actively distancing. Understanding the mind of a European auteur can be challenging.

This is not one of those worthless, ponderous pieces of arthouse twaddle but I would never enthusiastically recommend it to anybody. There are far better European dramas about the Holocaust that are emotionally involving as well as being solidly crafted.