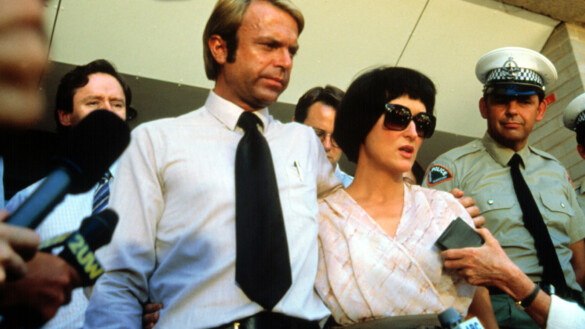 Popular culture is a funny thing. When something joins the cultural consciousness, one can never tell what impact it will have on the art in of itself. If a movie quotation, or moment gains access to those who have not yet seen it, you cannot help but be affected. Whether it be Ezekiel 25:17 from Pulp Fiction or “No more wire hangers” from Mommie Dearest, after hearing these out of context, it is impossible to separate that from your viewing experience. And this brings us to A Cry in the Dark, or as it was known to some audiences, Evil Angels. If you don’t recognize that name, don’t feel bad, it is a plot point and not a title that has become infamous, especially to signs of the uber popular sitcom, Seinfeld. Once you hear Elaine Benes shout “maybe the dingo ate your bay-bay” in a horrific Australian accent, you are forever changed.

As you might guess from this seminal sitcom moment, A Cry in the Dark is about a young couple whose baby is murdered/eaten by a dingo as they are camping in the wilderness.  Stop laughing. A Cry in the Dark, directed by Fred Schepisi, was attempting to capitalize on a zeitgeisty moment in time. This is based on true events and there was a famous court case in order to determine if a dingo did actually eat their baby, or if the parents were actually child murderers. Given our current state of publicity and the court of public opinion, it does come off a bit prescient for 1988.

Sometimes, a movie is greater than the sum of its parts. A Cry in the Dark is absolutely not that kind of movie. If you are going to enjoy it, it is down to two things. Meryl Streep and Sam Neill, and nothing in between. It reeks of tv movie quality, especially given the courtroom sequences. The cinematography from Ian Baker (also known for aesthetic classics like Roxanne and Mr. Baseball) is listless and boring. To be completely fair, he and Schepisi are given a tough needle to thread in the introduction. Is it tasteless to make the death of a child action-driven? Probably. But if you avoid that, you must build suspense. And there is none to be found here, nor anywhere else in the screenplay from Robert Caswell and Fred Schepisi. They make an interesting, albeit misguided decision to never allow any doubt about the innocence of the parents. The only moments that make us focus on the innocence or guilt are the opinions of the general populace, but we saw exactly what happened from the first five minutes of film.

This lack of beauty and originality makes the acting performances all the more impressive. Michael (Neill) and Lindy Chamberlain (Streep) react to losing their daughter, Azaria, in quite different ways. Streep, using an absolutely pitch perfect Australian accent, begins the film highly stressed and never becomes more likable throughout the picture. And yet, it works. It is an abrasive choice, but given her acknowledged innocence, her attitude becomes more acceptable. With a lesser actress, Lindy is completely unlikable and we turn on her, much like the general populace. Of course, none of this is a surprise. It is Meryl, after all. The real surprise is Sam Neill. Now, this is not meant in any way to denigrate his talent. He is beloved for a reason. But this is acting against the greatest actress of her generation. And Neill not only holds his own but goes toe to toe and is very effective emotionally. In many ways, due to her difficult nature, Michael is the emotional core. As their relationship fractures, we understand it through his pained stare and frustrated sighs. Lindy barrels through, hardly noticing, except to berate him a little bit more.

Once the viewers get past their memories of mockery via television, there is a lot to engage with in A Cry in the Dark. As a relationship drama, the film truly flies. It feels that this is what the director and writers are most interested in, as well. There are numerous scenes that are nothing more than Neill and Streep in a room, struggling to make a failing relationship work. It is when the film zooms out, to attempt a cultural criticism that it fails. The idea of a culture that judges parents comes off, frankly, very tired and repetitive. Most of this emotion could have been accomplished in about half the time. This, combined with the television-like quality of the landscapes, keep A Cry in the Dark from becoming anything truly great.