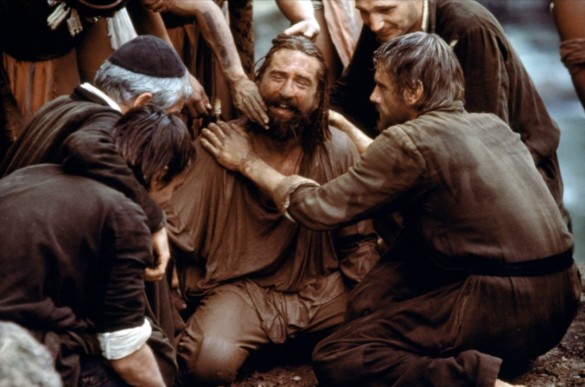 For generations, men and women have traveled the globe to explore their faith and spread their ideologies. Battles in the name of God take many forms. An introspective exploration of the soul and our actions can lead us to dark places within our psyche. Yet, visceral and physical violence perpetrated in the name of religion has scarred our world dozens of times over. Many auteurs seek to bridge these two extremes, revealing the profound moments of faith and character in the darkest moments of human existence.

Few films marry the two extremes like Roland Joffé’s The Mission from 1986. Anchored by Joffé’s direction, the Palme winner of 1986 combines magnificent performances with jaw-dropping cinematography. Focusing on two men, a former soldier, and a Jesuit priest, The Mission explores forgiveness, loss, and the punishments we take to reveal our character. Every bit as ambitious as his debut, Joffé finds God and purpose in the jungle but fails to bring out ingenious narratives that would have elevated the story.

Set in the 1750s, a team of missionaries climbs through the jungle to meet the Guarani people. The indigenous tribe is resistant to outsiders. After watching the first missionary fall over a waterfall while tied to a cross, the film introduces Father Gabriel (Jeremy Irons) and Father John (Liam Neeson). Slaver and former Spanish Captain Mendoza (Robert De Niro) discovers Father Gabriel’s arrival, causing his return to the local village. After Mendoza finds his wife and brother have begun an affair, he slays his brother in the streets. Gabriel counsels Mendoza and offers him solace in the service of God. After Mendoza takes vows to becomes a Jesuit priest, the mission they’ve fought so hard to protect becomes a pawn in negotiations between the Catholic Church, Spain, and Portugal.

Joffé approaches the philosophical text with patience. He relies on narration and a frustrating framing device, but the omniscient storyteller disappears into the background of the beautiful camerawork on display. The narration, despite serving as skillful exposition dumps from Robert Bolt, rarely adds relevant context. As a result, the images captured by cinematographer Chris Menges become more impactful as a storytelling device than any dialogue. Menges would take home his second Oscar, just two years after his win for Joffé’s The Killing Fields. The questions posed by Bolt’s screenplay feel dated, and it’s one of Joffé’s rare missteps with the construction of the film.

The first half of The Mission builds slowly, and Joffé conveys the sweat-drenched humidity of the jungle in every shot. As we watch the men struggle to find purpose and redemption, the wilderness becomes a literal and metaphorical labyrinth to traverse. As Mendoza grapples with his new life, he pushes through anguish to find deeper, personal truths. While perhaps a bit obvious, it is no mistake that Joffé shoots the emotional breakdowns in or around rivers. The symbol of life beginning anew in paradise serves the biblical and broad metaphors of The Mission.

The score from Ennio Morricone adds to the ethereal soundscape of the jungle. He seamlessly transitions between a traditional Western sound and the more specific sounds of the tribe. He utilizes the combination of strings and flutes to create a rising and religious undertone to the film. The use of drums and chants helps plant us in the local communities of the Guarani to life. Yet his chants take on a hymn-like quality, not unlike the ones you may hear from a church chorus. Morricone adds unique and subtle flourishes to sell individual moments of triumph as he traverses through the two sounds.

The push and pull between philosophies come from De Niro and Strong, and the actors are in peak form. While De Niro feels miscast, it is clear that was intentional. Not only does he brings a much-needed intensity to the film, but the Mendoza character must be a fish out of water. In the mid-1980s, few actors in Hollywood could oscillate between a murderous thug and an introspective priest. There are moments that the casting does not work, but De Niro’s movie star baggage brings depth to the choices he makes.

The wise and heartbreaking Strong dominates the screen with a different kind of intensity. When Strong speaks, he draws you in with his wisdom and grace. However, his repressed anger boils over, highlighting his struggle with his own belief. The all-consuming questions about serving God and saving the indigenous Guarani eat away at Strong. His ability to communicate his frustration and his subtle guilt makes The Mission one of Strong’s most underrated performances of his career.

Despite Strong and De Niro conquering the film as a two-hander, the remaining cast does not live up to The Mission’s leads. Ronald Pickup and Chuck Low provide interesting but cartoonish villains for most of the screen time. Pickup’s evil comes across with more nuance, but the two actors rarely fit the period setting. Ray McAnally plays his relatively straightforward role well but never rises above what is on the page. He brings an unearned melancholy to the role, especially given his character’s power over the film. Aidan Quinn also comes across as miscast, but his character’s fleeting role in the movie leaves us with little emotional connection to his fate. Even Neeson, who had already starred in several films, feels underutilized.

The 1980s rarely cast non-white men in lead roles, and that remains true in The Mission. Actors of English, Irish, and American descent play Spaniards and South American colonists. While there were many indigenous actors on set, few get any character development. The “White Savior” trope runs rampant throughout the film and directly pushes against the heroic framing of the Jesuit priests. We hear the members of the tribe embrace Christianity, but only through dialogue translated by Strong’s character. The lack of speaking parts afforded to these actors makes it impossible to ignore the colonial actions of the priests.

While The Mission would win the Palme, there were undoubtedly exciting alternatives for the Jury. Perhaps the most obvious was The Sacrifice, another faith-driven narrative that would be the final film for Andrei Tarkovsky. This film would win the Grand Prix, but its message is more palatable than The Mission in thirty-five years since its debut. Martin Scorsese’s After Hours might have felt too slight compared to The Sacrifice or The Mission, yet it remains one of Scorsese’s few underrated films. The Plácido Domingo-led Otello had a blackface problem, but it received considerable attention from several awards bodies upon its release. Finally, Neil Jordan’s Mona Lisa gave Bob Hoskins a platform for a powerhouse performance. Hoskins would share the Best Actor prize but would miss out on the Oscar at the end of the year. The 39th Cannes had plenty of depth and makes The Mission‘s win feels like a relic of a bygone era.

Keep an eye out for more retrospectives of previous Palme winners in the weeks ahead!