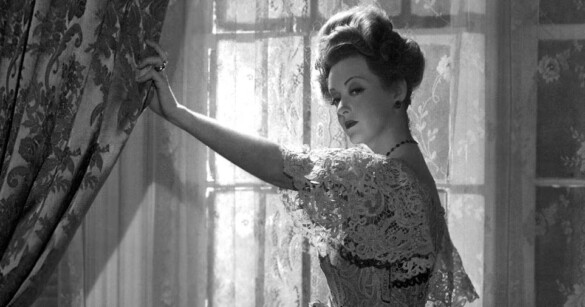 Wannabe southern belle Regina Giddens (Bette Davis) will use anyone to orchestrate her climb towards more wealth – including her wheelchair bound husband Horace (Herbert Marshall) and their growing daughter Alexandra (Theresa Wright). Regina’s brothers Ben (Charles Dingle) and Oscar (Carl Benton Reid) inherited the Hubbard and Sons family industry, but Regina intends to get more than her fair share via a prospective mill deal. Amid banking scams by nephew Leo (Dan Duryea) and drunken warnings from sister-in-law Birdie (Patricia Collinge), Regina lays on the charming calculations to assure she’s the last one standing.

William Wyler (Ben-Hur) directs The Little Foxes, the 1941 adaptation from Lillian Hellman (These Three) based upon her acclaimed play of greed and bitterness in the turn of the twentieth century South. Titular Song of Solomon 2:15 quotes, genteel protocols, Gibson Girl style, and a carriage ride through the Spanish moss set the scene. However, the shouting across the street introductions remain dated and stage-like when the first ten minutes could have been skipped in favor of opening with the delicate, in business only for profit dinner. Domineering, wealthy men think they are the best, and women in this world are either made meek or need equal guff. With such off-putting attitudes, poorly treated Black servants, and cotton mill investments, one might understandably think The Little Foxes was set fifty years prior if it wasn’t for the slim ladies’ silhouette. Unlikable people regale past grandeur, laughing about first cousins marrying to keep the cutthroat terrible all in the family behind their fancy facade. Nonchalant men in the bathroom plot to steal bonds and safety deposit boxes, and excellent mirror on mirror conversations reflect their duplicity. Unique camera angles and visual layers assure the conspirators don’t actually look each other in the eye while the razors are upon their necks. Front rooms and background interiors allow actor movement while curtains, shadows, and staircases provide places for the waiting in the wings drama to crest beneath the sparkling chandeliers. Sick relatives are pressured into immediate deals in shouting arguments upstairs while parties below conceal suspicious asides and whispers. Siblings keep secrets and steal shares – ready to cut one another out or hope one will die soon. Loans, wills, and inheritances skip the wrong people amid lawyers, close calls at the bank, blackmail, and drunken regrets. The camera perfectly captures the coldheartedness as the back is turned toward the rainy window while the feeble suffer the disturbingly patient, fatal scorn. Trouble brings this family together, and death is a gain when the mere $75,000 investment escalates to seventy-five percent of all business. Double crosses and jail time threats culminate in having it all – but at what cost?

I always have to remind myself that Bette Davis did not win Best Actress here in her fourth of five consecutive nominations (or for All About Eve) after already winning for Dangerous and Jezebel. Regina hates conversation before a hot breakfast and diffuses terse business talks with good port. She’s had to earn everything in life through her father, brothers, or husband but yearns to travel and remains lonely for all the things she doesn’t have. Regina jokes with her brothers about what to do if they were filthy rich – deftly slipping in how she should have a larger share and making the men think it was their idea. Regina’ is always literally above others, thanks to the balcony or stairs as the camera angles let her loom large within the frame and take charge over the brothers pushed to the visual side. She placates one, then pits others against each other, for no one will interfere with the plans that will benefit her most. Regina’s almost admirable in demanding her due, but she only pretends to care for her husband and keeps the doors between their rooms closed. She reclines in style while others keel over, and Davis has full command of the period accessories – fanning and fluffing the gowns to accentuate as needed or perfectly conforming to the shape of the Victorian sofa. Sparkling black gowns and veils reflect her evening mystique while white frills are for her seemingly dutiful wife. Regina resents all the men in her life who gave her nothing and confesses complete contempt for her husband, but when she finally gets everything she wanted, what is there to show for it?

While The Little Foxes goes overboard with his saintly scoring, Herbert Marshall’s (The Letter) sickly, kindhearted husband Horace deals with multiple medicines and a lot of cruelty. Visual parallels of his seated, inferior position better reflect his disinterest in making money off the backs of others. Horace doesn’t hate his wife only because he used to love her, but he’s glad to ruin Regina’s plans, and she despises him as weak with an unwanted touch in then provocative insults striking his manhood. Like her father, the little girl all grown up, soft glow angelic unaware is laid on thick for Teresa Wright as Alexandra. The nanny insists “Zan” brush her hair fifty times, and she doesn’t understand her uncle’s pressure to marry – drooling instead over a piece of cake, climbing trees, and still dressing like a child as if the character was meant to be much younger. Unchaperoned Zan is happy to bring her father home and take charge of his care, yet some of Wright’s scenes feel unnecessary. Rather than realizing the frigid twistedness, Alexandra only stands up to her mother in honor of her father after too many people give her the same hints.

It’s surprising that Wright was nominated for Supporting Actress compared to her subsequent Mrs. Miniver win, for Zan remains clueless to Richard Carlson’s intentions as poor newspaper man David Hewitt. The David character is apparently not in the source play, and the shoehorning shows in uneven scenes both golly gee innocent and older influencing pushing Zan to stand up for herself. Initially, Patricia Collinge (Shadow of a Doubt) as Aunt Birdie seems like a talkative busybody. She’s told to be quiet and apologizes for waking her husband early yet she is the one who comes from a more grand plantation past. Even those kind to Birdie roll their eyes at her old stories, never wondering why she is babbling sentimental before Birdie is cut off and corrected – accused as high strung, sulking, and difficult when she didn’t do anything wrong. The camera accentuates her tragic story as Birdie sits in a corner in the background, off to one side and made smaller as they laugh or dismiss her if acknowledging her at all. Her son steps on and rips her hem but keeps walking, so Birdie’s husband will make her adapt, and it’s shocking to see the slaps when domestic abuse was not often addressed on the silver screen. She thought her husband liked her but he only liked her plantation so now she drinks, despises her own son, and warns Zan not to end up like her. Collinge also played the role on stage and should have won the Supporting Actress Oscar for The Little Foxes, but unfortunately, she probably split the vote with Wright. Carl Benton Reid likewise transitions from the play as Oscar Hubbard, laying on the cotton history thick for their potential business partner before browbeating his wife and shaking hands with the brother-in-law he intends to swindle. Their banker son Dan Duryea is a creep, too, sneering that he could get up to a lot of naughty before scheming over safety deposit boxes and ultimately revealing his cowardice. Unfortunately, there is of the time Black subservience in The Little Foxes with servants portrayed as happy to know their place or treated as idiots who can’t remember or read when not gossiping about fancy guests and cold grits. Ironically, this secondary cast conveys the expected linguistic rhythms, for the main cast attempts no generic Southern accents and The Little Foxes never actually says where in the deep South we are.

Although nominated for numerous Oscars, The Little Foxes won none. Bitterness and abuse are surprising to see amid the Hays Code requirement to play up the innocence, but the corrupt reveling and one on one family malice are better than the superfluous young love scenes. The Little Foxes needed a tighter edit, and the pacing is uneven with the passage of time, travel, ages, and progressing illness unclear. These two hours will be slow for contemporary audiences expecting a scandal a minute instead of multiple back and forth scenes on the same deal. Fortunately, The Little Foxes is a character study waxing on a lifetime of gestating swindles. It’s of the time it portrays yet has an air of interwar superiority and older southern ideologies that read frightfully modern – making for a fascinating sociological rewatch.