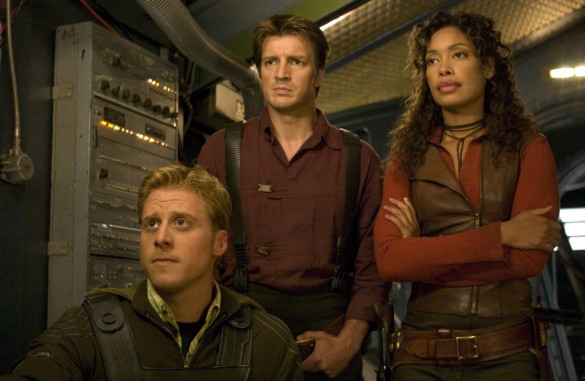 It would be understandable if Joss Whedon had a strong dislike for the folks over at Fox. After all, they canceled not one but two of his shows, amid contentious reasoning that still tastes sour to fans all these years later. While Dollshouse – his 2009 show, and the fourth he had created – was at least given an appropriate send-off after cancellation, it is Firefly which sticks in the craw of most Whedonites.

Firefly was a poppy space western, replete with the typical Whedon touches: acerbic, tongue-in-cheek humor; strong female characters; witty, snappy dialogue; and Nathan Fillion at his charming best as Captain Mal Reynolds. Coming off his critical and commercial success with Buffy the Vampire Slayer and its spin-off show Angel, which had mixed results, you would be forgiven if you expected Firefly to be a runaway hit for Joss Whedon. This wasn’t exactly the case. For starters, it got off to an inauspicious beginning, with Fox airing the first episode in the ‘death slot’ of Friday night; secondly, the first episode which aired was actually the second episode of the show, as Fox felt it was a more engaging beginning, confusing viewers who were thrown into an episode having missed the worldbuilding and introductions which took place in episode one. Alongside this, Fox never understood the humor or tone that made the show popular, and so its marketing was wrongheaded from the start. All of these issues played a factor in low ratings for the show, which led to Fox pulling the plug midway through the first season. It was a bitter blow for Whedon, who still feels hurt to this day.

Despite Fox’s decision to cancel, the show did receive critical acclaim, if not commercial. It also generated a loyal fanbase (styling themselves as Browncoats in reference to the show) during its initial run, who tried desperately to save the show from cancellation via online petitions, even going as far as to place an ad in Variety magazine. Fan campaigns continued unabated after the show ended, convincing Fox to finally release the DVD boxset in December 2003. A buoyant fanbase celebrated this release by creating another campaign to raise $14,000 in order to have the DVDs placed aboard 250 U.S Navy ships. Universal Studios, is a savvy company, knew a good thing when they saw it; Whedon approached them with a pitch to make a big-screen follow-up to Firefly and, so it goes, they immediately accepted. Thus Serenity (as it was called because Fox owned the name Firefly) made its debut on 30th September 2005.

The road to Serenity wasn’t an easy one. While Whedon had the job of continuing on a much-loved series in a new format, he also had to make the movie as accessible as possible for new viewers who hadn’t seen the TV show before. Story ideas were based upon plots which had been established for a second season of Firefly while others, such as Inara Serra’s disease (which was hinted at during the course of the first season), were summarily dropped. Whedon also had to contend with contracting issues; although everyone agreed to come back for the film, Whedon envisioned Serenity as the first of a trilogy of films that would require the cast to be available going forward. All but Alan Tudyk and Ron Glass agreed to commit to further movies, causing Whedon to kill off their characters in a redraft – leading to perhaps the most shocking scene in the movie.

Serenity was completed with a budget of around $40 million (considered a small budget for a sci-fi movie) and filming has taken place over 14 months. It debuted at the Edinburgh International Film Festival to a wild, rapturous audience. Alas, despite a captivated audience that compelled the organizers of the EIFF to create two more screenings due to high demand, Serenity debuted internationally to a relatively low box-office. Slated for number 1, it managed only second place, garnering around $10 million in its first weekend. At the time of its closing, it pulled in around $25 million, which was considered something of a failure given its nearly $40 million budget, although a worldwide total of around $40 million ensured that Universal more or less broke even on the project. This unfortunately seems to have killed off any plans that might have been made for the prospective sequels as, fifteen years later, there is no news or developments in that direction.

For all its troubled history, Serenity still stands the test of time. Even viewing without a knowledge of the TV show which inspired it. It sees the crew of the Serenity – Captain Mal Reynolds, first mate Zoe Washburne and her husband, pilot Hoban “Wash” Washburne, Jayne Cobb, and mechanic Kaylee Frye – continue traveling alongside their companions Simon Tam, and his sister River, a psychic with supernatural powers who is wanted by the shadowy organization The Alliance. They receive an invitation from Inara Serra, which is revealed to be a trap set by The Operative (an always compelling Chiwetel Ejiofor) who is working on behalf of the Alliance. This sets off a chain of events in which the crew must travel from planet to planet as they attempt to expose the Alliance’s secret plot to develop a chemical which renders the consumer docile to the point of comatose.

Serenity embodies the tropes for which Whedon was known, tropes which he established in Firefly; an anti-authoritarian stance (as depicted through the regime of the Alliance); liberty versus bureaucracy; and what defines humanity. There are comparisons to be made between it and the likes of 1984 and Huxley’s Brave New World in its depiction of an all-powerful authority who over-police a population to the point where free will is eroded. It’s a bold step for a sci-fi film with an already large burden on its shoulders but it pulls it off with aplomb.

As was the case with its predecessor, although Serenity never exactly broke any records, it still received significant critical acclaim. From Roger Ebert to Scott Orson Card (who labeled it “the best science fiction film ever”), critics were generous in their praise. Award bodies, too, saw its value; it was awarded the Hugo Award for Best Dramatic Presentation; the Nebula award for best script, and the Prometheus Special Award.

Serenity is a special sort of movie. It exists because of fans, created in a vacuum of optimism for a brief, shining show which petered out too quickly. It is the beneficiary of the cult following around it and is beloved by the Browncoats who campaigned tirelessly for it to be made. In that way, Serenity is a testament to grassroots campaigning and the importance of showing support for a product you love. It wouldn’t have been made any other way.

Although it’s very unlikely we’ll ever see another film set in the Firefly universe, Serenity is a reminder of how brilliant that universe is and, fifteen years on, the passion shown for it still burns as bright. The franchise continues today with comic books, novels, and board games appearing on shop shelves on a regular basis, so there’s no reason to have to say goodbye just yet.