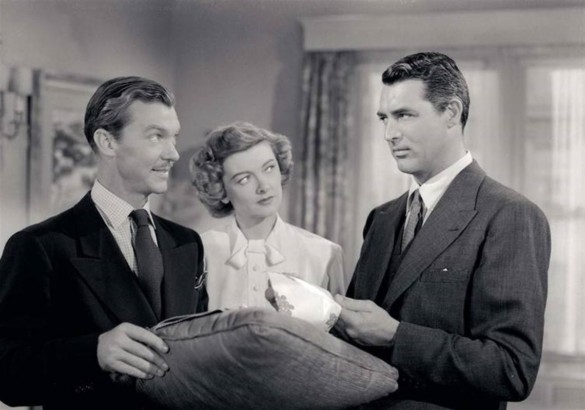 Advertising executive Jim Blandings (Cary Grant) is tired of cramped Manhattan living so he and his wife Muriel (Myrna Loy) buy a historic Connecticut property in the 1948 comedy Mr. Blandings Builds His Dream House. Their lawyer Bill Cole (Melvyn Douglas) disagrees with these perfect home ambitions, but the innocent mishaps and not so costly nostalgia remain satirically charming.

Based on the novel by Eric Hodgins, director H.C. Potter (The Farmer’s Daughter) and producers cum writing team Melvin Frank and Norman Panama (White Christmas) create a New York time capsule with retro cityscapes and a tongue in cheek narration waxing on the grandiose high life. The voiceover introduces the titular family before silent interplay and interrupted morning routines visualize the crowded lifestyle. For audiences expecting LOL a minute, Mr. Blandings Builds His Dream House may start slow, however, this subtle introduction spins the seemingly sunny, idyllic, typical mid-century American way as anything but. The pre-teen Blandings daughters bemoan what they think is mere middle class finery, obnoxiously critiquing their father’s job as commercial, parasitic, and perverse. They aren’t wrong in saying advertising makes people buy things they don’t want with money they don’t have, but they have no problem reaping the rewards from that advertising. Jokes about divorce in Reno, seeing an analyst, and threats to jump of the Brooklyn Bridge are dismissed as humor rather than taken seriously in then unheard of darker psychological commentary, but get away from it all ads for quaint Connecticut living put our snobbish New Yorkers in over their real estate heads. They get lost on the way to the property – twice – and refuse to believe tear down recommendations even as they can’t agree on rebuilding plans. Our couple tells the engineers how to do their business right down to erroneous staircases thru the pantry and chimneys hogging the center of the room.

The $10,000 budget goes up to $12,500 during the new house design, but what’s a few pennies to attain your dreams? The additional $13,329.45 to demolish the old house on-site, unfortunately, really hurts the wallet alongside water mishaps and dynamite blasts. Workers talk about The Blandings behind their back as they get in the way on the job site, interfering with equipment and needing bungled procedures re-explained in great “Who’s on First?” banter. They get locked in an unfinished closet when the crew leaves for the weekend, and the thirty day notice on their apartment means the family moves into their dream home sans windows and parts sent to the wrong location. Slogan deadlines, all nighters at the office, miscommunications, wet paint, and $38K and counting make for a frazzled family finish as the once so upstanding, what America is all about Blanding’s lament on the absurdity of building a home on $15,000 yearly salary. Today’s audiences completely relate to that minimum paycheck to paycheck number, making Mr. Blandings Builds His Dream House both understandable with a family looking over their shoulders at the price of achieving their goals as well as snickering at The Blandings’ terribly out of touch approach. Contemporary viewers can laugh at the past prices even as we know the crippling weight and mounting bills. Fortunately, a refund on a $12.36 overcharge and the compliment that they should take care of their pretty home makes The Blandings realize how grateful they should really be.

Poor Cary Grant’s Jim Blandings has to climb over the boudoir footstools and stumble into a closet where he can’t find anything before competing with the three women in the apartment for the bathroom. Jim brings his wife coffee in the morning, but his underwear is in his socks drawer and he looks forward to cutting himself shaving each morning – droll sarcasm that would indicate a deeper issue today. Jim envisions himself as a sportsmen in a grand manner, ignoring a bad land deal in favor of intangibles like being cooped up within four walls versus dream living that can’t be measured. He’s found something he loves, that he worked for and can say is all his. Jim doesn’t want cookie cutter designs and scribbles all over the plans, claiming he knows where every penny will go. Unfortunately, he can’t put his foot down on anything – wife, daughters, maid, lawyers, and each looming bill takes their toll. Jim obsesses with the house despite ad campaign deadlines and objects to being served the Wham ham he’s trying to sell. He thinks in America a man is guilty until proven innocent and doesn’t believe it is the other way around, wondering what he did for everything to go wrong.

Upon moving to his, not so country ideal, Jim finds out he needs to get up two hours earlier at 5 a.m. to catch a train for the commute. He comes to hate the house – grass is greener recalling that at least he had sanity in the city with a fine job, a trusting wife, and daughters that respected him. However, Jim really had none of those things, and the money eating property is the symptom, not the cause of all the problems. Contemporary cynical viewers don’t blame Jim when he finally snaps over the rising house costs, perceived dalliances, and unnecessary demands. We believe the stress getting to him even if his acceptance that he is not the king of his castle and apologizing for letting his hopes run away with him like some silly schoolboy seem unrealistically Hollywood and Hayes Code tidy. Myrna Loy re-teams with Grant after The Bachelor and the Bobby-Soxer, and we let Muriel Blandings get away with every little manipulation because we so love Myrna Loy. Her lingerie overtakes Jim’s two allotted drawers; she hides his socks, demands he hand her the washcloth and towel in the shower, and hogs the mirror while he’s trying to shave. It’ll be his fault if he cuts himself because she told him to get an electric razor. Muriel insists Jim put in a little more effort and not undermine the teacher’s authority at their daughters’ expensive school. She doesn’t want him to talk about money in front of the children, and when he objects that they spend most of it, Muriel calls it a lively discussion rather than bickering. She wants to redo the apartment without telling her husband – all in antique colonial furniture because they are such grassroots Americans.

At times, looking through modern eyes, Muriel can be pretty unlikable. She imagines what her country touch can do for their new property, which is entirely different from her husband’s vision complete with a then luxurious (and even still grand today) four bathrooms and a sewing room where she can sulk on rainy afternoons. If she has nothing to do but criticize her bread winning husband, why do they need hired help? Of course, she insists he say it’s “ours” even as Muriel demands one sacrifice after another, adding to the ballooning costs and refusing to move one inch on her plans. Her finite paint color instructions must be followed right down to the dot on the wallpaper in one of the best moments in Mr. Blandings Builds His Dream House. However, when Jim is jealous about her having dated his best friend in college and wonders how deceptive she really is, Muriel laughs at his so-called uncivil doubts. After all the double talk back and forth, he ends up apologizing to her! They ask why they love each other, and sometimes, we wonder, too. Muriel’s excuses and feigned explanations would be exasperating in real life, yet Mr. Blandings Builds His Dream House keeps our dame just this side of classy in the demure of old – ruling the roost and pushing her husband’s buttons right to the end.

Family lawyer Bill Cole also narrates Mr. Blandings Builds His Dream House, and Melvyn Douglas (Hud) breaks the fourth wall about being Jim’s quote unquote best friend. We see he takes Muriel’s side more, and she discusses an apartment remodel with Bill, not Jim. He warns them this deal is a swindle, overpriced with fine print, hidden costs, mortgage technicalities, and collateral needs. His humorous asides remind them how they don’t think before they act, but Jim wonders why ole Bill isn’t married and always kisses Muriel goodbye. She says it’s because he can’t find a sweet and wholesome girl like her, but Muriel also neglects to tell Jim she kept Bill’s fraternity pin. Their daughters claim mom’s diary from the time reads torrid, and it’s fascinating to imagine how sordid this love triangle would be onscreen today – especially when Muriel asks if Jim would prefer Bill shaking her hand and kissing him goodbye instead. Muriel wants to find Bill a nearby cottage, but he’s content being their third wheel and jokes he could live in her closet. When the bridge is rained out, he stays with Muriel alone overnight, and Mr. Blandings Builds His Dream House would have been better if there was actually something to this plot. Any would be scandalous is neither drama nor the primary comedy, just shoehorned in when the construction snafus need nothing else no matter Douglas’ charm.

Whimsical notes and bemusing blueprint credits set the mood for Mr. Blandings Builds His Dream House while period New York skylines, vintage roadsters, fedoras, and pipes invoke the high rise, masculine, business world. Naturally, there are separate beds – if only so our couple can fight over the alarm clock between them, and the ladies are dolled up in pearls, feathers, and frocks regardless of the construction messy. Though bemusing, montages speed up seemingly important action – even narrating dialogue that should be spoken – rushing the finale compared to earlier, draw out scenes. Although Mr. Blandings Builds His Dream House is less racist then previous films, Louise Beavers’ (Imitation of Life) Gussie is still the stereotypical happy servant. She comes up with the slogan that saves the day and her face becomes part of the ad campaign but all she gets is a $10 raise. For as old as they are, The Blandings daughters also only appear for pretentious commentary on the disintegration of middle class society they inexplicably think they represent.

Mr. Blandings Builds His Dream House is caught between earlier screwballs and later romantic comedies with uneven humor and underdeveloped detours. While not the focus, social commentaries accent today’s viewing, and more than one watch is required to spot all the charming asides, winking subtleties, and potentially deeper innuendo. Unlike our dark satire heavy with depressing implications, Mr. Blandings Builds His Dream House remains enjoyable thanks to the nostalgic facade, comforting struggle, and relatable bittersweet.