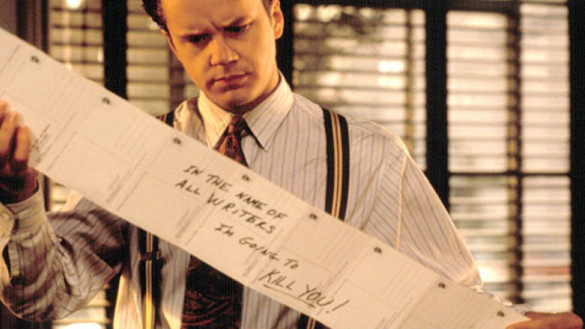 When I saw The Player (1992), I was responding to the hype as much as I was responding to the film itself. Everybody had touted it as the one big budget satire about the Hollywood film industry that pulls no punches and serves as a scathing indictment of a system that crushes the creative spirit of talented individuals. I understand why it is almost impossible for any filmmaker to produce something that has been funded by a major studio, that turns around and attacks studios like the one that bankrolled the making of it. I really, really wanted The Player to be the exception to the rule but it didn’t show me anything new and most of its attacks either seemed cliché or fairly watered down. It strokes the egos of artists at several points but I kept wondering when Altman was going to find a new way to package old ideas. Hollywood has been pumping out films about the dark side of the film industry since the beginning of time. That is why you have to bring a spark of creativity to anything that is going to provoke an extreme reaction out of the supposed targets of your film.

It’s all about studio executive Griffin Mill, Tim Robbins, who spends his days rejecting pitches from screenwriters and watching on as their ideas become increasingly derivative of previous hits. He is disturbed by threats that have been sent to him and assumes that the person who has been sending them is struggling screenwriter David Kahane, Vincent D’Onofrio. He accepted one of Kahane’s pitches but failed to follow up with him on what he had been working on. Mill ends up murdering Kahane after the two men spend a night together and Kahane begins to excoriate Mill over the fact that he is becoming a has been and may lose his job because of a younger rival. He covers up his crime and makes it look like Kahane was killed as part of a botched robbery. He is sent another death threat and realizes that he killed the wrong man but puts on a brave face and gets away with his crime. He enters into a committed relationship with Kahane’s former girlfriend, June Gudmundsdottir, Greta Scacchi, and eventually impregnates her. He is also able to regain his standing at the film studio by sabotaging his rival and turns a seemingly uncommercial film called ‘Habeas Corpus’ into traditional Hollywood fare. His life is comfortable again and he accepts a pitch from the screenwriter who had threatened him which is eerily similar to his own experiences.

The critiques of 1990s Hollywood are all very familiar. Producers speak with reverence about classic films without having any real knowledge about that period, everybody wants to shoehorn the same stars into all films, screenwriters with genuine talent are literally killed by producers and daring ideas are flattened out into bland prestige pictures. The film industry is low hanging fruit when it comes to satire and it seemed too easy to poke fun at those who are obsessively focused on the bottom line.

Throughout the film we see posters for unconventional classics littered around the offices of the studio executives. We are meant to see Mill’s use of a poster of The Blue Angel (1930) as hypocritical and representative of the way that Hollywood has always been willing to chew up and spit out true artists. Josef von Sternberg directed the film and he was seen as a visionary auteur in a time when the studio system often asked for directors who would be happy to tow the line and go along with what producers asked of them. The Blue Angel was highly influential but von Sternberg’s films began losing money in the mid-1930s and he found it increasingly difficult to get work as time went on. Mill is seen dismissing Buck Henry, famous for writing The Graduate (1967), from his office. This is ironic because he doesn’t offer him the second chance that the similarly accomplished von Sternberg might have hoped for. This shows that Mill is pretending to be committed to subversive, challenging artists but really has no desire to help them out when their work does not directly benefit him in any way. That is the sort of supposedly edgy commentary that Altman makes and I couldn’t help but wait for something more biting to come my way.

Altman would have been more radical by attacking the Clifford Odets types who claim that they are in the industry purely because of their interest in producing art that helps to inspire people and target social issues while also happily taking money from the bloodsucking executives who were able to commercialize the serious melodramas that he wrote. Odets began his career as a playwright and wrote plays such as ‘Golden Boy’, in which a young man must choose between playing the violin, his true passion, and boxing, which earns him money. The dichotomy in that play was clear and many were bemused by the fact that Odets suggested that a violin player could help the poor and the downtrodden simply by playing some Max Bruch for them. This sort of high minded portentousness and belief that artists could change the world carried over into his work in Hollywood and his films became successful because they received awards nominations from the Academy. That organization is made up of industry insiders and they probably enjoyed being told just how noble and selfless they were for producing art which stopped children from starving in the streets in some roundabout way. Odets probably wouldn’t have been willing to admit that his films were mostly seen by Hollywood types who wanted to appear to be intellectuals by viewing relentlessly self serious films about so-called serious issues. It would have been nice if The Player had cut the 1990s versions of Odets down to size.

Kahane is seen as an idealistic screenwriter who has not yet been corrupted by Hollywood when Mill meets up with him. It is hard to see why we should feel so sorry for Kahane when he has chosen to go into an industry that is based on Capitalism and, just like everybody else, he wants a piece of the pie. If it were really all about the art for screenwriters, they would all be making low budget John Cassavetes style features while occasionally working on a mainstream thriller that would help them earn the money to finance their own projects. Of course, they want it all, artistic freedom, high budgets, a salary that would allow them to throw the sort of parties that slimy producers regularly hold and acclaim from the critics. Any compromise is the end of the world and we should feel terrible for the writer who gets paid thousands to produce something that should be easy to pump out.

I say all of this as somebody who has regularly complained about how formulaic and dull modern Hollywood productions can be. I do want to see more support for artists who want to produce original content and I wish that there was a way for their work to reach a wider audience. All of this doesn’t change the fact that satires about the film industry shouldn’t be a pity party for the Altmans of the world. The narrative of screenwriters and directors being oppressed has been well and truly accepted by the masses and I can’t remember a time when I heard a person speaking about a bigwig producer with admiration in their voice. I don’t think that anybody thinks of Scott Rudin as the modern answer to Irving G. Thalberg and Thalberg himself probably wasn’t the saint that people make him out to be. Altman wasn’t saying anything in this film that those producers wouldn’t have heard before. In fact, they could probably laugh along as some flunky rambled on about Touch of Evil (1958) before comparing it to modern films that are not deserving of comparisons to that classic.

One critic compared watching this film to watching the Academy Awards and I think that they are similar in many ways. Appearing at awards shows and having family friendly comedians like Steve Martin poke fun at them makes them look self aware and humble. Martin will lob some weak joke at a figure like Robert Redford and we’ll see him laughing in the crowd. There is a creepy politeness to the jokes that have to be delivered at these shows and nobody ever cuts too close to the bone when it comes to the issues with the industry. Altman similarly allows movie stars to pretend that they are in on the joke by appearing in this film and all of his commentary must have seemed dated enough in 1992 for it to seem inoffensive to the right people. The hack screenwriters of the world probably nodded along as Altman highlighted the plight of the suffering artists who populate Hollywood and noted that they deserved better without explaining why they were really victims in this system.

I think that The Player fails when it comes to achieving its main objective, pillorying the industry, and that does end up counting for a lot. Altman was a filmmaker capable of making incisive satires but this is just not on the level of Nashville (1975). He seemed to be so much more comfortable in the world of country music and he dished out criticism to unexpected types of people in that film, rather than taking potshots at easy targets. The Player features some fancy camerawork, including the famous 7 minute, 47 second unbroken shot at the beginning of the film, but often it feels like Altman and Jean Lépine are just showing off. For fans of early 1990s cinema, this will provide them with an opportunity to see the major celebrities of the day and, for some, that might be reason enough to see it. This does not represent him at his best.