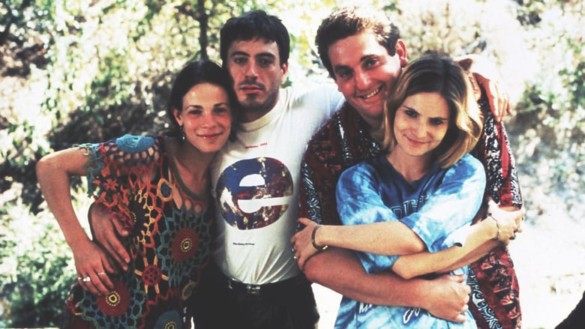 I approached Short Cuts (1993) with unbridled excitement and high expectations. It did not let me down.

So much of the motifs in the film will be familiar to fans of Robert Altman. You could accuse him of simply retreading old ground by returning to the style that had helped him to achieve success in the 1970s. I think that this is an unfair and lazy charge because Altman does present us with a version of Los Angeles that he hadn’t necessarily explored in his previous films. He seems to have a real interest in lingering around and capturing the moments in between the explosive fights between couples or the disastrous days at work. There is a languid quality to his storytelling but when you settle into his rhythm, it becomes easy to recognize the horrors of everyday life. The main point that he seems to want to drive home is that we are all struck with a feeling of loneliness at certain times during the day and have to fight to keep that feeling at bay. He has empathy for all of the characters and that is refreshing in a way that it shouldn’t have to be. More filmmakers should be taking a page out of Altman’s book and direct films that have more compassion for ordinary people.

There are so many different plotlines in this film that I would be taking up too much space by listing all of them, so I would like to narrow down my analysis to the plotline that I was most fond of.

I was most fascinated by Altman’s depiction of the marriage between put upon housewife Sherri, Madeleine Stowe, and philandering police officer Gene, Tim Robbins. Both characters have their flaws, him more than her, of course, but Altman views their situation through clear eyes and allows the audience to make judgments themselves. She’s your typical upper class, sheltered Los Angeles wife and it would have been so easy for Altman to dip into satire and mock her for how out of touch with the real world she is. Instead, he gives us scenes in which her privilege is on display but also reminds us that she is somebody who longs to step outside of the house that she is almost trapped in. She is almost excited by her husband’s silly, improbable stories that he makes up in order to hide the fact that he is having affairs. He is so arrogant that he thinks he is fooling her and she knows what he gets up to when he comes home a few hours later than usual but neither of them is willing to upset their precarious dynamic. They are happy to not rock the boat but they are both lying to themselves and you feel as though Sherri is living vicariously through her husband’s experiences. She would never go out and have an affair but he would and she can imagine him doing something dangerous without ever experiencing real risks herself. They remain stuck together and she keeps second-guessing herself as she wonders how painful it would be to leave it all behind.

Altman reinforces the idea that it is impossible for some people to upend their lives and completely change the way they live. That’s a message that is not commonly present in domestic dramas produced in Hollywood and Short Cuts allows us to marinate in the sorrow that Sherri feels. It isn’t an overpowering emotion and she isn’t gripped by it every minute of every day but when she isn’t talking to her children or watching her favorite television show at night, she begins to actually examine her life. Altman doesn’t give us long scenes in which Stowe walks around the house in an ostentatious manner and sadly furrows her brow as she notices the fact that her husband is never home. We don’t need to see a scene like that to feel the disconnect between husband and wife. Stowe’s body language always suggests that she is entirely self sufficient and used to working around her husband instead of working with him. She almost treats him like another one of her children as she lightly reprimands him and humors him when he attempts to lie to her. All of this seems unbearable but we do sense the fear that she feels at the idea of losing what she already has. Her sister, Marian, Julianne Moore, is similarly sheltered and concerned with problems that might seem petty but, in just one scene, we come to understand why Sherri is somebody who has settled into a marriage. She looks at her sister, a fickle, brittle woman, and sees the negative consequences that could come with following your whims.

Altman never suggests that Sherri deserves the treatment she receives and when she describes her husband lying about his affairs with a half smile on her face, it is difficult to watch her convincing herself that all of this is just normal. He seems to be trying to show us how people get trapped in these situations. Not all of them are involved in tempestuous love affairs and often the suffering they go through can seem depressingly mundane. Altman causes us to re-examine our views on this sort of marriage by also asking us to view the philandering husband in a different light. Gene is somebody who would probably describe himself as a loveable rogue and his seduction attempts are cringeworthy but he isn’t somebody who is overtly monstrous. There are times when he is nice to his wife and he isn’t self-reflexive enough to see that his actions could hurt her. Altman asks us to come to terms with the more subtle form of agony that Sherri goes through and we are left without a feeling of hope as this couple looks forward to an uncertain future.

There are other subplots that were engaging but there were ones that I was less ecstatic about. The storyline that involved three male friends go out fishing and decide to ignore the fact that the body of a dead woman is floating nearby, I felt as though Altman had come up with an interesting concept but failed to do anything original with it. My qualms were never that significant and I was always pleasantly surprised by the fact that Altman was asking me to do a lot of work when it came to thinking about the backstories that these characters have. This kept my mind active as I watched it but I also found myself relating to the characters more because Altman asked me to bring so much of myself into the experience of digesting all of these little stories.

There are so many different reasons to see Short Cuts and I’ve only listed one or two of them above. Another merit that it has is its ability to generate thoughtful conversation between viewers. If you sit down and watch this with a good friend, you’ll probably both come out of it with very different observations. It’s intriguing to see which storylines people end up responding to and it could tell you a lot about who they are. I don’t think of it as a perfect masterpiece but it’s valuable when it comes to understanding Altman’s point of view and it’s certainly an improvement over The Player (1992).