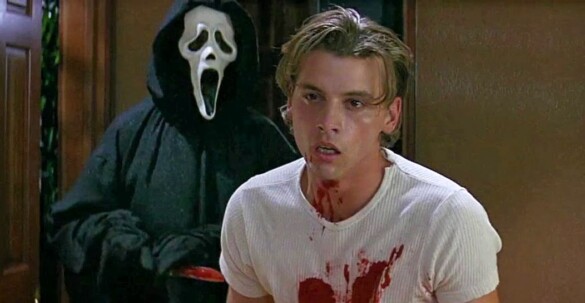 With the release of Scream this past weekend, I thought it would be a good time to return to the series roots, to see what sparked the horror phenomenon and evaluate if it still works. Scream was released in 1996, directed by Wes Craven, and starred Drew Barrymore, Neve Campbell, Courteney Cox, David Arquette, Skeet Ulrich, and Matthew Lillard.

Let me be frank for a moment: I don’t think anyone directs horror quite like John Carpenter. John Carpenter understands the simplicity of a story, and it reflects perfectly in his horror projects. As Randy says in Scream, “get too complicated and people stop caring.” The simplest plots make each Carpenter film work, whether it’s They Live, The Thing, or the slasher that Scream is most indebted to, Halloween. These films have created the unspoken rules of horror films that every other slasher tried to emulate in the ’80s and ’90s. And yet, I think it’s these rules that breathe life into Scream.

Scream’s life comes from its acknowledgement of those slasher rules. That meta-textual approach to the slasher film has become iconic because of this film. But what other meta horror film seem to have forgotten is how subversive Scream is as a slasher film. While many slasher sequels in the ‘80s and ‘90s reveled in the bloodlust, being full of promiscuous characters and horrifying deaths, Scream keeps its characters empathetic, in spite of their lifestyles. Along with keeping its characters empathetic, Scream also utilizes the oddball behavior of the friend group to create a strong psychological thriller. Everyone is a suspect, and that ensures there are no moment of rest when the characters are surrounded by their friends. And Craven continues to undermine the tropes of the slasher genre through these characters. While Randy states the three rules of surviving a horror film, none of them are a requirement to survive in Scream. The puritanical politics of the early slasher film are done away with completely. And the excessive violence, blood, and gore that had often become a staple of the genre aren’t the selling point of Scream. While there are some brutal images, like the hanging, gutted corpse of Casey (Barrymore), it’s never the focus of the film. Craven’s expert direction shows the reality of early horror movies, commenting on the dangers of a medium that finds joy in the brutal deaths of women.

And every individual of the cast and crew seemed to share this goal. The young cast members give fantastic performances throughout the film, with Neve Campbell being a clear standout. Though I would be remiss to ignore the insane performance of Matthew Lillard as Stuart, whose gleefully chaotic performance is a joy (and terror) to behold. Courteney Cox is fantastic in the role of Gale Weathers, bringing a ferocity to the headstrong reporter. Plus, every technical aspect of Scream is fascinating, too. Director of Photography Mark Irwin, known for his work on The Fly, brings his A-game to Scream. Irwin manages to create a meta-commentary of the slasher genre through the cinematography. Various cinematographic techniques popularized by the slasher genre are utilized to great effect in Scream, but Irwin expands on the vocabulary in the third act to subvert many of the classic clichés of the genre.

The prologue of the film is iconic for the stunt casting of Drew Barrymore, but I think it showcases Craven’s direction, Irwin’s cinematography, and Patrick Lussier’s editing perfectly. There isn’t a wasted moment in the opening twelve minutes, with inserts of popping popcorn adding to the tension of the scene wondrously. Barrymore’s performance is stellar, as she goes from relaxed to flirty to panicked in the span of just 8 minutes. As the camera angle gets steeper in it’s close-ups of Casey, we are visually told just how powerless she is. The sound design keeps us on our toes as we don’t know where Ghostface is. And the score by Marco Beltrami ratchets up the tension expertly.

But the core element of Scream is Craven’s expert balance of tone. Scream manages to be funny, scary, sexy, and anxiety-inducing without having any tonal whiplash. Often, these tones blend into one another, as a scare will transform into a gag, and then reveal a new, more horrifying event. The film is constantly reframing itself, as new information is revealed to us regarding both the plot and characters.

Screenwriter Kevin Williamson’s decision to have Scream be a blend of the slasher and detective genres enables the film to be just as suspenseful in the daylight as during the night. It engrosses the audience from start to finish, and enables the appearance of Ghostface to carry even more weight. Where early slashers waited until the second half of the film to enable confrontations between the final girl and the killer, Scream keeps the confrontations coming sporadically throughout the film. And where early slashers had near immortal killers, Scream revels in the weakness of Ghostface. But that doesn’t lower the tension of the film. While Ghostface is prone to being pushed around, they never stays down for long. Ghostface is a haunting villain, and that keeps the suspense at an all time high throughout the film.  That is the genius of Scream. It’s a film that keeps the suspense and terror associated with other slashers, while obliterating the misogynistic rules of those films. It’s meticulously crafted, and after all these years, it’s still a masterpiece.