Classic Film Review: ‘Children of Men’: 15 Years Later, As Resonant As Ever 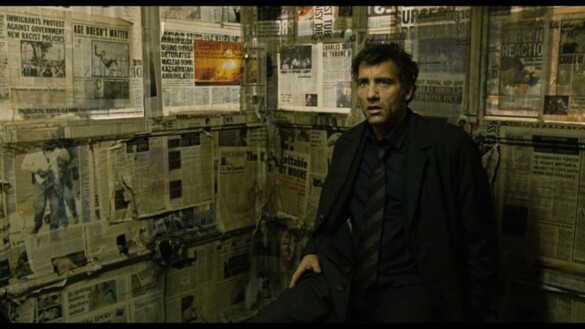 A white London at Christmas time, split right down the middle with crime and violence. Something sounds very familiar, right?

In what has been heralded as one of the great modern day sci fi films, Children of Men is supremely gritty, spookily relevant, and even heartwarming at times. You can’t help but listen to the ideologies of the characters, and in Michael Caine you have a pot smoking hippie, it really doesn’t get much better than that. This is a science fiction film that feels more like real life than anything otherworldly, and this might be the biggest compliment I can give it. You could easily mistake this for a cinéma vérité style documentary in the mold of Dziga Vertov; the harrowing scenes of ruination and the current news coverage paralleling the Iraq War news reports of the time – it is completely relatable, which is the film’s most impressive quality.

Children of Men is sublimely directed by Alfonso Cuarón; it is intricate, extremely detailed, and possesses great nuance with every scene. After the success of Prisoner of Azkaban, the pressure to emulate such fantasia is a daunting task, so to create something so contrasting but equally compelling is mightily impressive. It paved the way for Cuarón to finally construct Oscar winning films with the likes of Gravity and Roma – it was about time, don’t you think? For Children of Men though, it was nominated for Best Adapted Screenplay (adapted from the book of the same name by P.D James), Best Film Editing, and Best Cinematography; with the latter two being some of those most memorable of the decade.

Let us dive into those stylistic traits it would become known for; the camera work really highlights a dystopian England that has become broken and ripped apart, clinging on to something hopeful – is this mirroring the present day? However, the decision to include a variety of one-shot action scenes was a superbly brave choice, they became iconic to the film and again gave it that documentary feel – never has a man jump starting a car in the early morning whilst escaping captors ever been so exciting. The music throughout is perfect, specifically the choice of music; as the characters travel from place to place, the music matches the nuances of British life(especially London’s huge mix of cultures). It is quite magical to understand that, even amid the madness and the divide, that British culture carried on thriving. Together though, the score, the sound editing, and the cinematography marry so well, almost as if they were meant to be. Their successes cemented Children of Men to be more than your average sci-fi film, providing it with many levels of creative storytelling ability.

The story is set in 2027, as 18 years of human infertility have left society on the verge of extinction. Theo (Clive Owen) discovers a pregnant woman and must transport her to safety, whilst being hunted by supposed activists. Kee (Clare-Hope Ashitey) is the pregnant asylum seeker and an original character created for the film. The decision for her to have African origins was a purposeful decision by Cuarón. It represents the fact that humanity began in Africa, and the fate of humanity relies on this woman – it has come full circle, and there is something quite poetic about that. It is a deeply layered piece of writing by Cuarón and his team, to adapt the narrative to include creative intricacies like this is beyond impressive.

The film’s magic doesn’t end there though because it delves into a multitude of themes and beliefs that are perfectly relevant to the present day; with hope, religion, and faith all playing major parts in the evolution of the film. There is a hope integrated into every individual, the hope of resolution powers people through their pain, and with that, a faith for those hopeful beliefs. There is no need for exposition, no need for explanation of how things will be resolved; faith is all you need. This is something Cuarón was desperate to achieve – a thinking man’s film where you create your own origin and end game. The film also uses religious teachings as part of its overall understanding, with the title itself “Children of Men” being extracted from the very scripture that is needed for its own exploration.

Children of Men is a monumental film with a huge number of purposeful references submerged deep within. Cuarón includes homages to the arts, specifically the art of Michelangelo (the statue of David and the reimagining of La Pietà are very significant), as well as the story of the nativity; all of them linking back to the importance of religion. There are also projections of wicked events in history, moments like the holocaust and the wars in the Balkans being imprinted onto the film with great detail and the utmost respect. What Children of Men also does brilliantly is its portrayal of immigration in this country, a topic which has split Great Britain and remains an important area of discussion. With all these notions towards topical subjects, the fact it was filmed with this documentary style of filmmaking is important for realism – indeed, there are certain shots that are harrowingly accurate to past events.

Away from all the turmoil though, Cuarón impressively captures all the little refinements of the British people; the dry witted humor that Britain prides itself on is electric in this film. That idea is elevated through Clive Owen’s performance as Theo; he is an everyman, an awkward Brit thrust into the heavy world of violence and corruption. He epitomizes Britain’s cynicism and its brawny optimism all in one character. Children of Men isn’t just a brutal futuristic story of hate and power, highlighting the worst of humankind in its struggle for control, it has far more positive overtones that protrude through the destruction – the themes stand the test of time and are more important now than they ever were. Along with its style and narrative, Children of Men was a generational film and very independent from other great sci fi films of the past 15 years, which should firmly plant itself in the discussion of what are the greatest sci fi films of the 21st century.