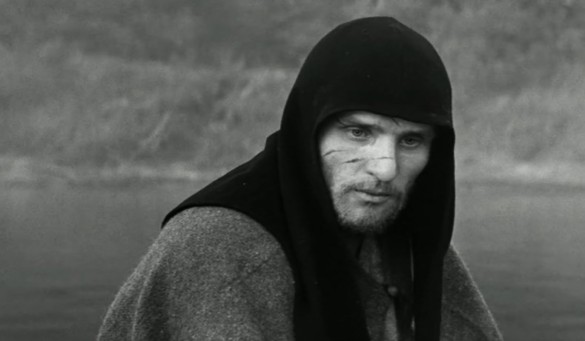 There is enough content in Andrei Rublev (1966) to fit into about three different films. I could easily see a director who wasn’t Andrei Tarkovsky choosing to cut this film up into several episodes and release this as a series of sorts. It could have been the Russian equivalent of Scenes from a Marriage (1972) or Dekalog (1989). Hell, it could have been similar to Sergei Bondarchuk’s War and Peace (1966-1967). But Tarkovsky is Tarkovsky and he chooses to present his audience with a lengthy epic that is at once overwhelming, frustratingly obtuse, and mesmerizing. From scene to scene, my level of engagement could rapidly dwindle or dramatically increase.

Like all episodic features, you find yourself responding to some episodes more than others, and you wish that more time had been allocated to the sections that you liked. Andrei Rublev is split up into ten different parts and each deals with a different period in the life of the titular religious icon painter. We see Rublev (Anatoly Solonitsyn) gaining inspiration during his early career and learning how to master his craft, before going through a spiritual crisis that leads him to question whether there is any purpose in creating art. After witnessing the burning of Vladimir, he comes to believe that mankind is not worth saving and retreats from society altogether, for a long period. He spends many years searching for reason and purpose in life and finds his artistic focus shifting as he experiences a great deal of struggle.

The episodes that stood out to me were Episode IV: The Last Judgment and Episode VIII: The Bell. In the case of the former, I was stunned by the beauty of Tarkovsky’s symbolic imagery and the surprise of seeing a film about faith that chooses to challenge it in a such an aggressive manner. We live in the time of God’s Not Dead (2013), a scary piece of Christian propaganda that suggests that intellectuals who question Christian beliefs, deserve to get killed in hit and run accidents. That film tried to pretend that Christians don’t go through periods in which they experience doubt over their beliefs or experience disagreements with fellow Christians over what it means to follow the teachings of the Bible. All Christians are white, middle-class Americans (preferably from states like Arkansas and Missouri) who exist as a sort of hive-mind. The victims of Christian belief never appear on screen and atheists make ridiculous straw-man arguments that nobody makes in real life.

Andrei Rublev takes the opposite tack. It’s not just a piece of propaganda made by white Southerners with a right wing political agenda, it actually ends up presenting an ambivalent view of religion. It acknowledges that a significant part of Rublev’s worldview has been shaped by Christianity but, as time goes on, his viewpoint begins to change. He is presented as puritanical and unwilling to forgive those who do not follow traditional Christian principles during the first few sections of the film. This is why it is so astonishing to see him challenged by a naked Pagan woman, known as Marfa (Nelly Snegina), who chooses to question him about Christian persecution of followers of other religions. Her angry diatribe comes after he has self righteously lectured her about why Pagans express love in the wrong manner. We see him genuinely questioning the moral values that have served as the basis for his entire perspective.

It’s a shattering moment and it comes after a dreamlike, gentle sequence in which Rublev wandered through the woods and came across two Pagans who were engaged in intercourse. This feels like a violent, shocking moment because it has come after so many scenes in which Rublev appears to passively watch the actions of others, without being affected by them. Everything seems to change when Marfa confronts him. She is initially cloaked in darkness and prowls around like some sort of predatory creature. Her overt sexuality seems like an affront to the ascetic Rublev, but she begins to look like a stern headmistress as she nears him. The lighting in this scene is magnificent, as it gives everything a heavenly spectre and sets you up to believe that Rublev is going to be a martyr who is presented in a sympathetic light. Tarkovsky then smartly throws you off by putting all of the focus on Rublev and his response to Marfa’s compelling, forceful speech. This moment of hesitation, and others, trigger his breakdown and decision to turn away from the lifestyle that had defined him. It’s important that this feels like one of the major turning points in the film and not just another throwaway scene. It feels important in every sense of the word and ensures that we never lose sight of one of the major themes of this story.

In the case of the latter, I was floored by the amount of detail that Tarkovsky packs into a relatively brief episode. There was something so satisfying about getting to see a simple fable play out. The story of a boy coming of age, with power corrupting him and an inordinate amount of pressure causing him to almost lose his mind. It’s a real masterclass in economic storytelling and the simplicity of the dialogue during this episode is a perfect fit for the sort of salt of the earth, stoic characters that feature in it. I appreciated it so much that I almost wished that the entire film had just been vignettes that were enjoyable on their own terms. I understand the larger purpose that this episode served, but I also wondered whether it occasionally felt like too much of a diversion from the main storyline. If Tarkovsky had tried to tell the stories of multiple different characters, rather than continuously returning to Rublev, it might have been easier to get through the long stretches in which a certain inertia takes over. This could have felt like less of an undertaking and lost some of the heaviness that occasionally weighs it down.

Many have called this one of the few masterpieces in cinema history. I would not go that far, but I still felt that there was so much to savor here. Individual moments, such as a horse rolling over on a muddy bank and Masha gliding through the water whilst making her escape, will likely stay with me forever. They spark emotion, thought, and a whole lot of implications that I could carefully consider with a fellow cinephile, whilst drinking spirulina. That’s what arthouse films are for, and you could never claim that this film doesn’t cater to its target audience.