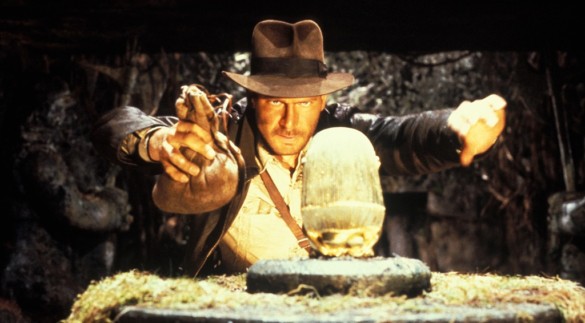 As a team of explorers wanders through a jungle, the sun peaks through the branches. The obscured lighting builds an instant fascination as the men move silently through the jungle. A hive of bats turns scares their guide, turning him into a flurry of flailing arms and louder screams. The others trudge through the jungle, following a wordless leader deeper into the foliage. The men begin to wilt under pressure, proving themselves unfit for the challenges awaiting them. In the end, only two men enter the temple that houses a golden idol. As the unnamed hero makes his way to the shrine, the tension tightens on his face. As Indiana Jones arrives at the dangerous puzzle, he secured his place in the pantheon of cinematic heroes.

From its opening set-piece, Raider of the Lost Ark establishes itself as a masterpiece. Steven Spielberg’s immaculate vision lends Raiders a nostalgia and texture that grounds the film in reality. Yes, mysticism and otherworldly phenomena litter the franchise. As the Indiana Jones franchise developed and changed, the relic hunts became ingrained in belief and cosmic powers. Yet the images of dust, wooden spikes, and massive marble statues root us in an explicitly tactile world. Forty years since its release, Raiders of the Lost Ark remains one of cinema’s true masterpieces while spawning a worldwide phenomenon.

Since its release, Raiders has largely been credited as the work of three men. George Lucas wanted to tell stories outside a small intergalactic franchise that captured the imagination of the world. Spielberg has already created an American masterpiece in Jaws, and Close Encounters of the Third Kind had proven his versatility. Harrison Ford, like Lucas, was looking to branch out from a galaxy far, far away. The three men had the clout to bend Hollywood to their will and the means to create the ultimate original property. While the series would harken back to Buster Keaton, Errol Flynn, and the serials of the 1950s, it had the promise of something greater.

Despite the vision of Raiders as a three-man circus, it’s impossible to ignore the immense talent present across the film. Lawrence Kasden and Phillip Kaufman would each develop the story and screenplay, paving the way for their own success in the director’s chair. Douglas Slocombe captures dozens of iconic images with his camera and expertly captures action sequences with intimacy. As he follows Indy and Marion through a marketplace, tracking the street fight as it evolves, one cannot help but see Raiders’ influence on kinetic action films that would release in the next few decades. Michael Kahn deserves much of that credit as well, as the three-time Oscar winner expertly vacillates between long character-building moments and the brisk cuts within the action sequences.

The aural experience of Raiders remains unmatched, both in its use of score and sound. John Williams won five Oscars and has been nominated thirty-eight times. It’s a stunning career, and yet Raiders remains one of his most influential works. Williams’ score adds to the majesty of Spielberg’s camera. Few films can balance the upsettingly creepy creatures lurking in the shadows with the pure evil of the Nazis. Williams adds considerably to the romance, and his light-hearted flourishes highlight the comedic moments that Karen Allen pulls out of thin air. The Oscar loss for the Raiders score is arguably the most egregious snub of Williams’ career. While Chariots of Fire’s score is iconic, the Raiders score achieves a universality that few instrumental pieces ever will.

If Williams wasn’t enough of a shining star, Raiders features the greatest sound team ever assembled on a film. That may sound like hyperbole, but the sound team alone went on to win 22 Oscars, 101 nominations, and multiple special achievement Oscars. The names are iconic, including Gary Summers, Gary Landaker, Stephen Hunter Flick, Ben Burtt, Kevin O’Connell, Leslie Dilley, Bill Varney, Mark Mangini, Randy Thom, and Steve Maslow. The soundscapes of Star Wars, Pixar, Mad Max’s wasteland, the beaches of Dunkirk, and even Michael Bay’s asteroid were born from these minds. The influence is incalculable, and the way modern cinema sounds can largely be attributed to the crew of this film.

Even with all this talent at his disposal, Spielberg remains the essential figure in shaping Raiders as a cultural phenomenon. After Kaufman decided to pursue other projects, Spielberg assumed total control. He would push Ford into new ground as a performer. The actor’s reputation was as a smooth ladies man, and while Indiana Jones certainly plays up those aspects, it also allows him to be a knowledgeable, adventurous nerd. It was a far cry from Han Solo or Bob Falfa.

Spielberg boosted Ford’s confidence in delivering expository dialogue, but the line readings create as much excitement as the whip fights. The stakes of the film are instantly made clear through the use of a chalkboard and a textbook. Peering over the shoulders of two men, the image of lightning and death instantly puts them at a state of unease. The silhouette of Indy becomes iconic in its own right throughout the film, and the repeated visual motif establishes the larger-than-life persona of our hero.

The practical effects continue to age well, and with 4K transfers flooding the market this past week, Raiders still looks incredible. The set pieces remain iconic. Disney would later incorporate the bazaar fight, the boulder run, and the plane fight into an Indiana Jones stunt show for their theme parks. That show ran thirty years of productions before COVID temporarily closed it down. One might be surprised to know the majority of the film was set on stages because of the minutia Spielberg brings out of the settings. Raiders thrives in creating this sensation, thanks to intricate production design, brilliantly choreographed fight sequences, and dozens of set pieces.

That is not to say that Raiders does not have some questionable elements. The depiction of Middle Eastern and Egyptian characters leaves a lot to be desired. The romance with Marion has always been uncomfortable at best. Under further examination, a girl that can barely give consent fell in love with a student in his early twenties. The film rises above these issues, in part because of its rapid-fire dialogue and rapturous story. One can enjoy this film and simultaneously feel these pieces are questionable in their execution.

With a whip snap and an errant gunshot, Indiana Jones instantly became an icon of the silver screen. The ultimate homage to the Matinee Idols of old ushered in epic storytelling and reinvented the action blockbuster. Spielberg, Lucas, and Ford remain the icons of Raiders of the Lost Ark, but the influence and skill of this crew are nearly unmatched in cinema history. For a brief moment, many of Hollywood’s most influential artists and engineers collaborated on a single project. The final product deserves its place in the American canon for decades to come.