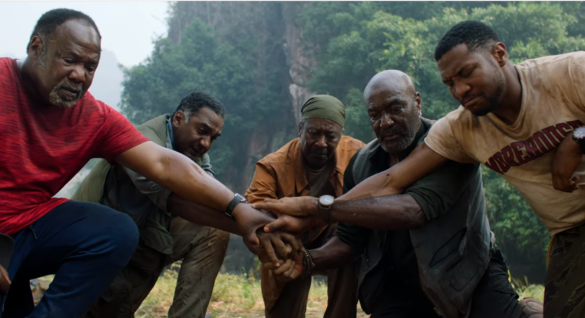 Da 5 Bloods explores the friendship between four army vets who meet up after several years to honor their friend who died in the Vietnam War. Directed by Spike Lee, Da 5 Bloods opens with shocking real life footage of Vietnamese people being murdered, children running in the streets during the infamous napalm bombings, and Black activists, such as Angela Davis, protesting against police brutality. This isn’t the first time Spike Lee has utilized real life footage to hammer home his film’s message. BlackKklansman also featured footage from the Charlottesville’s protest with then president, Donald Trump’s, hateful rhetoric narrating the violence that ensued.

The argument that every man is born equal under the American flag and all good Americans should be patriots rings hollow during those first few scenes. One cannot help but feel uncomfortable knowing the impending sacrifice Black soldiers will make as they embark upon a military career for a nation that has only treated them with disdain. In just three minutes Spike Lee has given the audience a rapid history lesson and you go into Da 5 Bloods having a strong sense of the inner conflict our protagonists have wrestled with and the controversy that cloaked the war effort.

The use of real-life footage is incredibly powerful and it sets the tone of the film and gives the viewer a snippet of what it was like for soldiers fighting in Vietnam. But Da 5 Bloods isn’t just about the Vietnam War; it’s a film that aims to celebrate the friendship and life long bond made between our four protagonists: Eddie (Norm Lewis), Paul (Delroy Lindo), Otis (Clarke Peters), and Melvin (Isiah Whitlock Jr.).

Delroy Lindo gives a visceral performance as Paul, the proud veteran in denial about his PTSD. When a young Vietnamese boy, physically impaired, begs for money as the Bloods drink and converse in the bar this scene is the first hint of such an affliction and as an audience, we realize that despite the seemingly happy-go-lucky nature of the Bloods the effects on their mental health are considerable.

It’s the hard work and commitment by Lindo that deserves to be celebrated as in a recent virtual interview with Bounce Cinema, he discussed the methodical approach he took to portraying his character which involved interviewing real-life veterans extensively, his own cousin who is a veteran and re-reading texts on the war. There is an unmissable scene with the Bloods on a river which was completely improvised and it’s this scene that truly cements Lindo’s talent at characterizing the harsh mental effects of war.  His dedication to the role is unquestionable and the result is a performance of outstanding authenticity and zeal. While Lindo was not nominated for a Golden Globe, the Oscars would be remiss not to recognize his work in this film.

Through flashbacks, we see the Bloods fight with their deceased friend, Norm. Norm acts as the calming and rational friend of the group and his absence is palpable even though we only meet him in retrospect. He reminds his friends: ‘’We bloods. Will let nobody use our rage against us. We control our rage’’ Anyone familiar with James Baldwin’s work will know of the rage that Norm speaks. Spike Lee is telling his audience that it is ok to be angry and we have a lot to be angry about. However, we must be careful to keep our emotions in check despite the injustice and political unrest we endure. Furthermore, if one is not careful our anger and need for acceptance can leave us vulnerable to manipulation and one cannot help but wonder if that is the message here, regarding Black people serving in the military.

‘’Gold does strange things to people’’

Da 5 Bloods runs at 2 hours and 35 minutes, and during this time, we see the Bloods each have their own demon to contend with: issues with drugs, familial relationships, money, and mental health all crop up as they embark upon their journey in the jungle to pay honor to their friend. Reparations are a frequent discussion and a worthy one but the ‘’anchor around my neck’’ that Paul refers to cannot be dispelled with gold bars. On a larger scale, this argument that Da 5 Bloods illustrates is a bitter pill to swallow for the Black population, as no amount of money can undo the horrors inflicted during the Slave Trade.

Da 5 Bloods deserves a nomination for Best Picture because of how it skilfully treats the subjects of war, patriotism, and race. It has strong performances from its cast and the onscreen chemistry between the actors is evident. The social commentary on the effects of war is one that will force the audience to question their beliefs. Spike Lee is fearless with his direction and there are scenes that are so graphic that you want to look away but you cannot. The Bloods truly love each other and it’s this love that relieves them. In order to survive trauma, one needs the love and understanding of those close to them and Da 5 Bloods shows that this love need not come from familial ties but a friend who sticks closer than a brother.