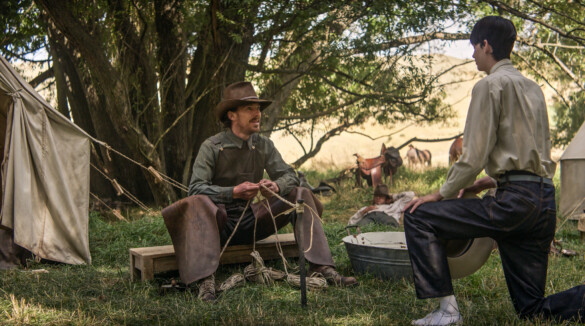 The 27th Critics’ Choice Awards is this Sunday and once again I’m honored to be a part of it in a small way as a voting memeber. The group may not have the best reputation, but at the very least I’ve done my due diligence to see all the films and consider every nomination. Obviously, not all of my picks will win, however I’m hoping for a few surprises.

At any rate, below are my predictions for the 2022 Critics Choice Awards!

Prediction: I really want Nicolas Cage to win this. He gave the best male performance of 2021, however this is Will Smith’s award to lose. And I can’t be mad at that, honestly. Smith has had a fascinating career and he’s quite great in King Richard , so it feels like something that’s been on the way for some time. When he wins I’ll be more than happy for him.

Prediction: Troy Kotsur has been on a roll and is more than deserving of this award. He’s so funny in CODA, but he’s also involved in the film’s most emotionally blistering scenes as well. There’s a lot of discusison about that final audition scene, but his work in the concert scene, and the “truck scene” that takes place right after, is truly special.

Prediction: I’m somewhat torn on this category. My heart lies with Caitríona Balfe and her work in Belfast, which is the heart and soul of that movie in many ways. However, at the same time, I do very much get the love for Ariana DeBose and why she’s going to win here. So, as much as I love Balfe and would love to see her take this award, it’s going to DeBose.

Prediction: Holy good God this category. Personally speaking, I’m not even sure where to begin. Every single one of these nominees deserves to win. All of them. My gut instinct is that Rachel Zegler will win given the broad love for West Side Story, however I’m hoping for an upset with Cooper Hoffman or Emilia Jones. Imagine the moment if Hoffman wins and he goes up on stage and starts talking about his late-great father. There won’t be a dry in the place. I would personally turn into a waterfall. Jones is equally as deserving though and gives a remarkable performance in CODA. In the end I will predict Hoffman, but I can see it going to any of them. On a side note, my true vote is Woody Norman, but there’s been no love for C’mon C’mon sadly (which is heartbreaking to me).

Prediction: This category is also tricky as there’s at least three really good contenders here between The Power of the Dog, West Side Story and Belfast. With Haim and Hoffman also nominated, maybe Licorice Pizza has a small chance as well, but not sure I see that film winning here. My gut is that Belfast ends up winning here as this may be the only category to award the film.

Prediction: Jane Campion is a legend and I can’t wait to see her walk up on stage.

Prediction: This could be the other category where Belfast gets a win, and if the rest of the group loves it as I do, maybe that’ll be the case, however I’m going with PTA to win this category. Anderson been somewhat in the hot seat lately, and maybe that will influence some of the voters, but this is where Licorice Pizza gets its love if there’s any to go around (unless I’m right about Hoffman also winning).

Prediction: Another stacked category. Can it be a six-way tie? Is that possible? If not, I hope Greg Fraser is ready to accept this award. And who knows, maybe he’ll be back again in a year for The Batman. All joking aside though, Dune‘s cinematography is out of this world (pun intended) and he’s more than deserving to win here.

Prediction: As many of you know, I’m not an awards expert by any means, even if I do follow along and pay attention to what happens each season. Context that’s important here because many of our friends who I’d consider to be experts on the matter have Dune winning this category. Which very well may be true. However, given the amount of love I’m expecting for The Power of the Dog, I’m going with Peter Sciberras to win here. That could be myopic of me, but that’s my bet and I’m sticking with it.

Prediction: Really want to go with Dune here, but not sure if it will be Cruella, a film that’s literally about costume design. So, Cruella it is for me.

Prediction:If Cruella doesn’t win here, it seems as if The Eyes of Tammy Faye as this one.

Prediction: Now this one has Dune written all over it. I can’t fathom it losing here.

Prediction: With Licorice Pizza being nominated for Best Picture, it would seem really silly for it to lose here, but I don’t care, I’m going with Barb & Star Go to Vista Del Mar. I don’t care how illogical that is, what a hilarious movie and I want to win.

Prediction: Encanto will win, and it is good, but I do think it should go to Flee. It’s one of the very best films of 2021, period, regardless of how you want to categorize it.

Prediction: As we talked about at the 2021 InSession Film Awards, it was a phenomenal year for foreign language films, with two of these nominees in my personal Top 10 of the year. However, this is Drive My Car‘s award to lose and it will take home the prize here.

Prediction: “No Time to Die” is a fine song, but in the Bond canon, it’s not nearly as memorable or impactful. I’m hoping that “Dos Oruguitas” steals this one.

Prediction: Hans Zimmer should have won the Oscar in 2014 when Interstellar came out. He arguably (and I know many will push back on this) should have won in 2010 for Inception. It’s hard to believe that he only has one Oscar up until this point, and that it came almost 30 years ago, but it does seem as if that’s going to change in a few weeks when we do get to the Oscars. And I think his win here is another stepping stone in that process.