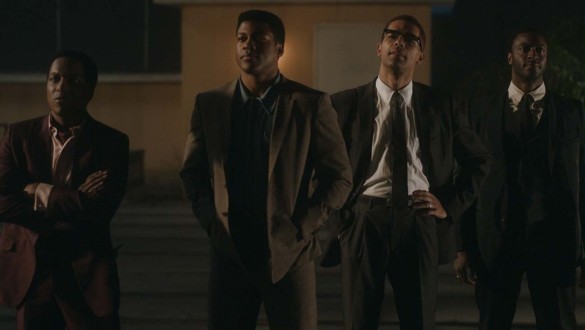 The award for Best Supporting Actor has been stacked full of worthy winners over the last few years, from Brad Pitt’s first acting Oscar to Christoph Waltz’s Tarantino double. It’s the perfect blend of A-listers, veterans, character actors, and breakout stars, with a standout often too hard to pick despite the winning seemingly obvious by the time Oscar night rolls around.

With release dates being pushed back and delayed on a weekly basis due to the ongoing pandemic, it’s difficult to know for sure which films will be in contention by the time the Oscars roll around. But given what’s currently slated to release at the time of writing, here are the current top contenders for Best Supporting Actor.

The devastating passing of Black Panther himself Chadwick Boseman is still difficult to comprehend, having lost a long and brave battle with cancer last month. What’s so inspiring and super-hero like with Boseman is that he was starring in blockbuster projects and beautiful character studies while suffering a painful illness. It always felt inevitable that Boseman would be destined for Oscar glory in one roll or another and this is the Academy’s opportunity to do so. Like Fences, Ma Rainey’s Black Bottom is based on August Wilson’s play and is produced by Denzel Washington and stars Viola Davis. What remains to be seen is the quality of the project itself, but with so many reliable talents involved, it’s hard to imagine it won’t be a contender.

Sacha Baron Cohen – The Trial of the Chicago 7

Early reviews of The Trial of the Chicago Seven are nothing short of incredible, with Aaron Sorkin’s film now heavily tipped as the Best Picture frontrunner along with Nomadland. With the size and star power of the ensemble involved, the question is who from the supporting cast makes it in. As proved by The Irishman and Three Billboards in recent memory, it’s not unrealistic to imagine the film can get two of its stars nominated in this category, so that’s what we are currently going to predict. The first, Cohen, has been the subject of glowing praise, and the trailers released seem to heavily feature his character and suggest a strong arc. Despite being an Academy Award nominee for writing, Cohen is yet to receive a nomination for his acting, but early reviews hint that it’s a career-best performance from him, and one that is likely to land him a spot in this category.

Mark Rylance – The Trial of the Chicago 7

Mark Rylance’s performance as lawyer William Kunstler is earning a lot of early citations and suggests he could be in line for a second Oscar nomination. He won for his first – Bridge of Spies – beating strong competition from Sylvester Stallone, and has found a career on screen after many glorious and successful years on stage. The incredible respect for Rylance from his peers could help him stand out from the rest of the fairly young cast, and history shows that this category is often filled with one or two legendary veterans each year. Competing for a win is unlikely given the ensemble nature of Sorkin’s film, but it appears he has the role to earn a second nomination.

On the topic of veteran actors, there are none better suited to that title than Academy Award nominee David Strathairn, who after several decades in the industry gained his first Oscar nod in 2006 for Good Night and Good Luck. While Nomadland is very much the Frances McDormand show, reviews suggest that the film is going to be a top contender, which could mean Straithairn is along for the ride. The reviews for his performance are kind and an actor with his credentials surely deserves a second Oscar nomination after all his wonderful years in the industry. Like Rylance, it’s impossible to imagine he competes for the win given the strength of other performances in his film, but he ticks all the right boxes to land a nomination and it wouldn’t be wise to bet against him. A Straithairn snub would suggest an underperformance for Nomadland, but in a year where so much has been delayed and pushed back, that’s nigh on impossible to imagine happening.

Kingsley Ben-Adir – One Night in Miami

Regina King’s directorial debut One Night in Miami is being received favorably, and with a slate of iconic figures in American history being portrayed on screen, surely one of them makes it in? The best bet is British newcomer Kingsley Ben-Adir finds himself in the Oscar lineup for his performances as Malcolm X. His performance is earning raves, describing it as an incredible breakthrough performance, and playing the American accent perfectly. Denzel Washington earned an Oscar nomination in 1992 for his performance as Malcolm X in the film of the same name, so Ben-Adir would be the second actor nominated for the role.

Whether David Fincher’s Mank becomes a Best Picture contender remains to be seen, but on paper, it can’t miss, telling the story of how Citizen Kane came to be. With much of the buzz surrounding Oldman and Seyfried, there’s still a chance that British actor Tom Burke – who in the same vein as Ben-Adir would be having a breakout performance – finds himself among the nominees. Portraying the legendary Orson Welles helps his cause and he certainly has the look nailed down. What may hurt Burke is the number of stars in the cast, it’s going to take a special performance to standout. However he may, and if Mank does find itself among the frontrunners, Burke may very well receive the first nomination.

Any Other Supporting Actor from The Trial of the Chicago 7

The strength of the ensemble in The Trial of the Chicago 7 once again cannot be understated, and it’s worth mentioning further the potential that somebody other than Cohen and/or Rylance makes the cut. Jeremy Strong is fresh off an Emmy Best Actor win for Succession which can only help raise his stock and profile, while Eddie Redmayne has long been an Academy darling, having won previously for The Theory of Everything. Frank Langella as the film’s antagonistic character could prove to be a respected performance, while Yaya Abdul Mateen II also won an Emmy recently for Watchmen and an Oscar nomination could cement his status as one of the industry’s most exciting actors.

Whatever way the cards fall, this season’s Supporting Actor competition looks exciting and fresh, with a healthy mix of breakthrough stars and veteran performances. Boseman is an undeniable frontrunner here, but the biggest question marks will be who and how many of The Trial of the Chicago 7 cast make the cut, and how many of the breakthrough British stars will make the lineup, with Ben-Adir and Burke both very much in the race.