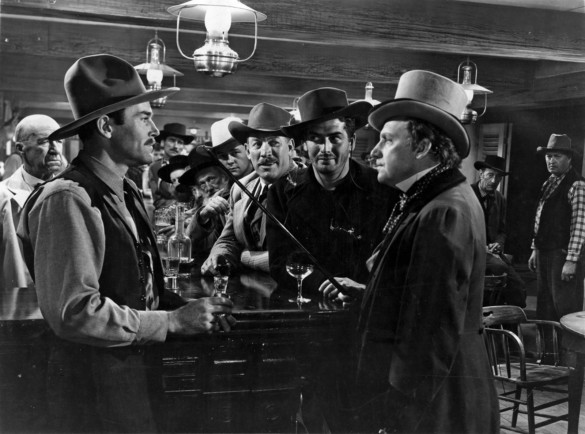 We’re probably all familiar with the folk ballad, “Oh My Darling, Clementine”. The origin of the song is unknown, some historians claim that the ballad was based off an old Spanish song which was made popular by Mexican miners during the California Gold Rush (1848-1855) which saw an influx of people (estimated around 300,000 people) come flooding into the state. It is this song that John Ford’s 1946 Western is named after, My Darling Clementine although the film’s narrative has very little to do with the titular character, Clementine (played by Cathy Downs). Instead, My Darling Clementine centers around the real life character, Wyatt Earp (played by the absolutely brilliant Henry Fonda).

The real life Earp was an interesting man, who was at different times a professional gambler, teamster, and buffalo hunter. Eventually, he found his way to the boomtown of Tombstone, where he took up the role of deputy marshal. He became friends with John “Doc” Holliday (played in the film by Victor Mature), a man who like Earp had several occupations including professional gambler, gunfighter and dentist. Both Earp and Holliday would take part in one of the Wild West’s most famous shootouts, the Gunfight at the O.K. Corral that took place on 26th October 1881. The shootout lasted all of thirty seconds.

Wyatt Earp became the stuff of legend. In 1931, a popular biography penned by Stuart Lake entitled Wyatt Earp: Frontier Marshal was released, and in the 1930s alone two films both named Frontier Marshal were released. Lake retold the story in the 1946 book My Darling Clementine, which Ford acquired the film rights to.

It seemed only natural that John Ford would be the one to direct My Darling Clementine. He had actually met the real life Wyatt Earp who recalled the famous shootout involving Doc Holliday and the Clanton gang. At first, Ford was reluctant to make another film for the film studio, 20th Century Fox, but due to his contract he owed them one more. My Darling Clementine would be Ford’s second Western of the post-silent era.

My Darling Clementine takes a different approach to telling the story of Earp and Holliday. In fact, much of what we see occur in the film didn’t actually occur in real life. There wasn’t a Clementine Carter, the Earp brothers were never cowboys, Old Man Clanton (played by Walter Brennan) actually died well before the events of O.K. Corral and Holliday had been a dentist, not a surgeon. Regardless of these oversights in historical accuracy, My Darling Clementine certainly deserves all the praise that it has rightfully gained over the years.

The character of Wyatt Earp is about as heroic as it comes. He’s the kind of man who rolls up his sleeves and gets on with it. He doesn’t want to become deputy of Tombstone, but the town is so lawless and out of control that ultimately he is the only one that can step up to the challenge. As Earp, Henry Fonda is so effortlessly cool. Similar in attitude to John Wayne’s The Ringo Kid in Stagecoach, he doesn’t try to act cool or tough, it just seems to come naturally to him.

However, this isn’t to say that there aren’t any faults to be had with Wyatt or with the picture. He’s a gentleman towards the character of Clementine, but his treatment and attitude towards Chihuahua (Linda Darnell), a hot-tempered Latina love interest of Doc Holliday, is frankly sexist and borderline misogynist. There’s also issues in terms of the racist treatment towards some characters, most notably a drunk Native American, which feels very uncomfortable to watch through our contemporary lens.

Ford seems less interested in the female characters, Clementine feels far too virtuous and innocent to be a realistic woman, and Chihuahua is treated so poorly. It feels that there is a strong homo-erotic element to the relationship between Earp and Holliday, who at first seem to be enemies towards each other but as the film develops their relationship evolves. Both men have a mutual respect for each other and you cannot help but wonder if their feelings for each other go stronger than simple respect.

Perhaps this was Ford’s intention all along, as in the film’s original ending, Earp simply shakes hands with Clementine rather than kiss her. His reason for leaving Tombstone seems a little thin, but what if we were to discover that he was in love with Holliday; then maybe it would be evidently clear why he can’t stay, the memories would be too painful to bear. It was studio interference led to the film being cut by thirty minutes and that kiss

Regardless of whether or not there’s something more romantic to the relationship of Earp and Holliday, there’s no denying the fact that My Darling Clementine is an important picture. It’s a film about friendship, loyalty and respect. A film about honor. A classic Western fairytale that played fast and loose with the actual history, and helped give birth to the new revamped myth of Wyatt Earp, Doc Holliday and the Gunfight at the O.K. Corral.