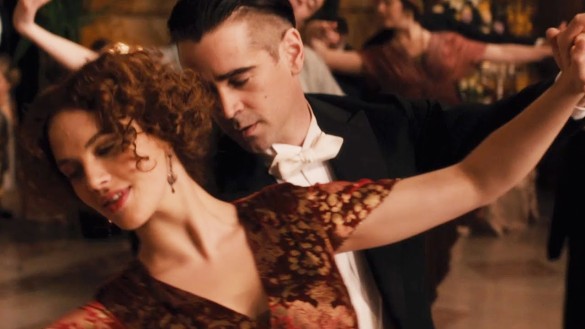 Synopsis: The story of a privileged girl and a charismatic boy whose instant desire sparks a love affair made only more reckless by parents trying to keep them apart.

And as the movie goes along…

Nothing make sense, the CGI is terrible and this pretty much sums everything up…

SCRIPT
Oh dear God, I hope the book is better than the screenplay…

This is seriously some of the worst writing I’ve ever seen. You don’t buy into anything for a second. The fantasy elements are forced, the pacing is terrible and nothing seems genuine. Everything is so contrived and ridiculous that it’s almost laughable. Again…

PERFORMANCES
Colin Farrell is not bad at all but his character is so badly written that it’s hard to believe anything he does. Jessica Brown Findlay is pretty good and probably the most believable of anyone. And Russell Crowe…

I love Russell Crowe and what he was doing in this movie is a head scratcher. To this credit though, his character, like all the others, is written really bad. And then there’s Will Smith…

Will Smith owes us all an apology. He keeps choosing terrible projects to be a part of and what in the world was he doing here? His scenes are terrible and almost made me cry. This is an actor I used to love a lot…

Something worth talking about. The score was done by Rupert Gregson-Williams and his mentor Hans Zimmer. Much like The Counselor last year, this is an awful film with a really beautiful score. It’s the only saving grace for this movie and it’s the only thing that kept my interest. The are some action-like moments that Zimmer and co. just nail but the majority of the film was a laid back orchestral style score that was absolutely gorgeous. So, thank you Hans. Without you, I would’ve had nothing.

FINAL THOUGHTS
This movie is absolutely absurd on all levels. I can believe in flying horses, not aging over time and a battle between angels and demons when it’s used right and makes sense for the story. In this case, we have all those elements with no foundation to support them and it all comes across on screen as laughable. Thank you Hans Zimmer for giving me something.

All in all, I’d rather watch the entire Twilight saga 100x over before seeing this film ever again.